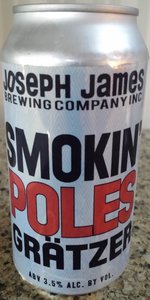 Notes:
View: Beers
Reviews: 2 | Log in to view all ratings and sort
Reviews by VanillaHeat:

I had this one on tap at Papago Brewing. It was a little lighter than I expected, but It was smokey. The Director at my old job used to drink a tea that tasted like a campfire. This was similar in taste to me. The name was funny too. I would like to find it in the cans, but I have only seen it on tap here.

Received this can as an extra in a trade. Says for Sample use only not for sale. Haha, interesting.

A - Pours into my Duvel tulip a nice crystal clear incredibly light straw hue. Seriously, one of the palest/lightest coloured beers I have ever seen. There was a two finger white head but it faded rather quickly and left some spotty lacy wisps, light creamy halo, and next to no side lacing.

S - Aromas are pretty pleasant here. Light cereal grains, faint malt sweetness, and a pleasant smoke aroma. While not subtle (which would be a bad thing) this teeters between light and the perfect amount. Its very pleasant and inviting, everything perfectly discernible and harmonious.

T - Taste is similar to the nose. Hair more malty sweetness than the nose, and the grains are nice. There is a fair amount more smoke on the taste. Good amount of flavour here considering the ABV. More of a meaty smoke than a campfire one. The smoke works out wonderfully against the lightly sweet malts.

M - Mouthfeel is really, really good considering the ABV. Does not feel thin at all, which is pretty shocking considering how low it is beers typically feel thin/watery. Super crisp and clean. As I drink this I honestly do not know what more I would like. Perfection.

O - Overall this is really, REALLY nice. I would want this in a massive German litre mug and a big plate of sausages. This is one of the most easy drinking smoked beers I have ever had. Not because of the ABV, but thanks to how wonderfully balanced the smoke is with the rest of the beer. The only knock I have on this is the appearance; not how pale it is, that I think is perfectly fine, but of how quickly the head disappears into next to nothing.