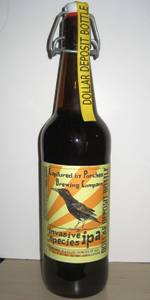 Grabbed a flip-top $1 dep. bottle of this at The Beermongers... heard about this brewery... and St. Helens needs one... even though many good ones exist further over in Astoria... Like Astoria Brewing (wet dog cafe) and Fort George brewing etc...

- Thick murky dark amber IPA... looks more like a cloudy double, or barleywine styled ale. White thick head down to a cotton sheet over the top.

- Certainly some earth bitter hops show up in the flavor. Loving the hops... not liking the malt so much... a strange funky earthy meat flavor on top of a thick syrupy molasses.. strange indeed. Loving the hops again though even when I belch...

- Overall it needs some work... and my sister lives in St. Helens and helped fix the place up a bit... nice local support there. So far consistency is off... but I am sure we will see more great things from this brewery in the near future once they get things settled.

Appearance: ruddy orange-brown, hazy, big layer of yellowy fine-beaded foam with good head retention; but VERY CHUNKY... if you don't pour the entire bottle into a glass with the first tilt, you're going to need a spoon to finish your beer

Flavor: bready, chewy malt profile that threatens to turn sweet but is tipped back by an acerbic, throaty hop bitterness; finishes dry with a long-lingering bitter aftertaste; hint of rust

Other comments: A very raw IPA with a kind of throaty bitterness that verges on off-putting. The harshness dies down about midway through, though.

Pours dark copper with thick haze and a full inch of beige froth. Plenty of lacing throughout the glass and a solid skim coat held tight.

Aromatics start off with pungent tangerine pith and dank herbage. Crushed chives stuffed into a tangerine peel with earthy bark. I was getting a lot of Summit hops, but there is plenty of garlic and onion as well.

Oily citrus and a medium malt base start the palate. Slightly resinous with orange oil and candied grapefruit. Hints of pine and earthy grass.

The nose is so dank it might be over the edge, and the palate comes off a bit light on the hops after the massive promise form the nose.

An interesting IPA and would certainly revisit.

A problematic beer in every dimension outside the visual. This IPA's appearance forms around classic amber tones with a soapy head of airy froth. Looks good. But the first whiff carries with it a troublesome cidery element suggestive of acetaldehyde. The flavor is a fierce, overwrought maelstrom of bittering and little more. An acerbic fist of lemon rind punches through. And the mouthfeel is like razor stubble.

Drastic and scorching. And it gets worse as you drink it.

Pours a hazy deep gold with a creamy, burly pancake-like head that retains well. Minor lacing is left on the glass. Aroma is slightly sweet but mostly subdued.

Initial taste is underwhelming, but midway through the beer brightens with some mild rind-like hop notes. Finishes somewhat grassy with a faint veggie undercurrent.

Mouthfeel is relatively thin with a slick presence on the palate. Malt profile could use some bolstering and the overall "feel" comes off a bit watery. Overall not a bad beer, just not my style. Cheers.

I was looking forward to this as it came it a cool flip top bottle to re-use next time I bottle. Pouring into the glass it had a good head but color was a hazy amber with some lacing.

The smell was a little off and gave the aroma of green apples. It was more malty in the nose than I am used to. Taste was dominated by the off flavor which I would gather is the green apples. Some citrus in the background. In the mouth it is semi dry and goes down easy. Overall the bottle was sweet but it may need some re-tooling.

Nice looking IPA. About two fingers of off white head and good amount of lace. Head lasted at least five minutes. Smell is not much. A bit of grain and some dank hops.
Taste is standard American IPA but not as bold as the West Coast style. IBUs are now listed as 70 and it is plenty bitter. The hops are not complex at all just bitter.
Mouthfeel is just above light and carbonation is just enough.
Overall an average IPA. Plenty drinkable but not one I plan to revisit.

WTF. Can't imagine this is the beer they intended to sell. At the first pop of the swing top I was doomed. Gusher! Foam everywhere and difficult to poor. When everything quieted down the aroma was a blast of sour/tart citrus (lemony) which was present in the taste as well. The body was thin and abrasive. Would love to try this fresh to see if it's just a bad bottle. Bummed too because I hate to write a negative review of such a small brewery.

The server at Saraveza sent me back to California with this bottle.

Nothing special, but a nice offering from a small brewer. I do enjoy the starling label.

Well, with the bad reviews already posted I was kinda dreading popping the top of this artsy-labeled beer which I picked up recently while in Oregon. Personally, I think the reviewers are being too harsh. This beer isn't the best, but it certainly is not bad...

The appearance is quite dark for an IPA--the darkest IPA I've ever seen in fact. It resembles a dunkelweizen in color. It also has the massive, pillowy off-white head to match with nice frothy lacing throughout drinking. It looks nice, just a little too brown for an IPA. There is LOTS of yeast in the bottle which makes for an extremely cloudy brew, which is nice.

The smell is interesting. I think this is the lowest point because it is unusual. After several whifs I picked up hops, yeast, and an odd nutmeggy cinnamon-like spiciness.

The taste is more similar to a nice pale ale than an IPA in that it's not very hoppy and lacks the intensity of most IPAs...especially the ones coming out of the NW, like this one is. It is also quite carbonated from the yeast, which adds a nice Belgian-ish flavor, by the way. There is also a good bit of alcohol in this beer. The label says 6.3% but mine tastes and feels more like 6.8-7.0%--perhaps it fermented more since December (?).

The Invasive Species IPA has a good body and nice consistency all the way through. I found it very drinkable and very enjoyable. I think it could be improved by adding less yeast, but, as it is, it's an interesting variation on a NW IPA.

One more thing, the flip-top is dope, but I'm not really feeling (or understanding) the whole bird theme. Is the beer commemorating invasive birds in Oregon, or is the beer invasive? Seems like another brewer putting inside jokes on their labels. And what's with the Imperial Japanese flag motif? Weird.

Pours a slightly hazy amber with an orange tint. Really nice cream puff head in the tall glass. Bubbly streamers and plenty carbonated in the mouth. If I had been given this in a blind tasting, I would have said it's a pleasantly dry cider with a touch of sugar and a surprising bitterness. The attractive foam lasts to the bottom of the glass. There is a woody and earthy taste. Nothing seems to identify itself as either grain or hops, so it's a rather mysterious concoction. It even smells like pears and apples.

I can see why people would rate this low as an IPA, but think outside the box. If you don't try to think of this as a beer it's a pretty good appley, tart drink with a bitterness like an Italian aperitif. Might be good over ice with a lemon twist. From the 22 oz bottle purchased at Market of Choice on 29th in Eugene.

Gushed from the pop. I mean, the top blew off the bottle! Chilled out after a few minutes. Clumpy head still. Aroma was garlic and steak seasoning (did I spill some on the beer in the cooler?).

Taste, so gritty, looked like homebrew. Maybe even nugget hops, was extremely bitter. Wasn't enjoyable in any sense, may have taken a little enamel off the teeth. Was very happy to get this one over and done with. Would like to try it again, but fool me once, twice, you know the saying.

I bought this bottle at Cork on NE Alberta. The bottle is a $1 deposit, the brewer reuses the bottle. It is a pop-top bottle listed as 1 pint and 9.4 oz. American pints here so the bottle is 25.4oz or a normal 750ml wine bottle size. I used a english pint glass 20 oz.

A- After noticing a heavy yeast content in the bottle I poured this beer slow. It poured dark, unfiltered, and heavily carbonated, but head dissipated quickly despite being thick.

S- A sweeter note then one would except from a 6.3% IPA. Almost a Belgian golden ale smell. Low hop content on the nose.

T- Okay, this tastes like an IPA now. A slightly sweeter malt front is backed by a fairly dry hop profile. The flavor of the hops & yeast stay with you.

M- This beer feels much lighter then I expected.

$1 deposit bottle unlabeled. A gift from a friend-of-a-friend, who tells me it was the IPA. I'll take his word for it.

A: Pours a murky amber-yellow with a topping thick, creamy off-white foam.

T: Lemon/citrus, pine--your typical fresh IPA aromas..at first. After the first glass, it turns yeasty with lots of bananas. I was pretty careful to let the bottle settle before I poured, but this has a LOT of sediment.

M: Somewhat watery, and very carbonted, but certainly not a "gusher" as described by some of the other reviewers.

D: It's a strange experience to finish a bottle of "homebrew style" beer. This kind of thing will fly in the Portland area, if anywhere.

Had a couple bottles, one nearly flat the other over carbonated. Both were very bitter and yet very little hop character. Pine is over the top and there is no malt to support it. Overall unpleasant.