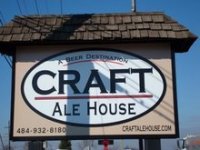 View: Place Reviews
Reviews: 42 | Ratings: 63 | Log in to view all ratings and sort
Reviews by DrJay:

I've stopped in here with the family about once a month since the place opened. Lately, it seems that the operation has really come together and things have smoothed out with respect to service and food. The place is always spotless and has been very kid friendly. Our toddler enjoys the chicken fingers quite a bit. The food is usually solid and some of the soups have been quite enjoyable. The tap list keeps changing, which gives you a reason to keep visiting, and the selection is often quite good with some harder to find kegs making their way here (stuff like Pliny the Elder). There's rarely a stinker in the ~15 taps, so it's hard to get bored. It was a treat having this place about 2 minutes from my doorstep for the past few months. I'll miss it now that I'm up in the Boston area.

Visited the Craft Ale House last night on a whim and would never return due to their SEXIST ideals and policies.

Arrived shortly before 10 with a friend of mine, the place was empty except for two other women who were at a table and a man playing acoustic guitar in the corner. We sat down at the bar and before we could even say hello we were asked to leave. The bartender preceded to tell us they didn't serve men who wore tank-tops and showed us a sign specifically calling out MEN about their sleeves. I was shocked such a SEXIST rule existed! I looked over at the two women, the one was wearing a strapless dress, the other a spaghetti-strap top.

Now I'm all for following rules but this is just an unnecessary, body-shaming rule that left me feeling marginalized and singled out. My tank was a nice, fitted, store-bought top that was free of dirt and holes. I was dressed in a fashionable way and always take pride in my appearance. I'm not sure why men's shoulders are so offensive, how are my shoulders any different than the shoulders of the two women at the other table!?! I can imagine the backlash in 2017 if it was reversed, and women were told they had to cover up while men could wear whatever they like.

As I said, I left feeling upset and singled-out because of my sex. The owner must have a real inferiority complex if he/she is concerned about this type of stuff so much they have to enforce archaic, awful rules.

It's a private business so they have the right to make up whatever stupid rules they want but I know my friend and I will never be returning, and I would suggest others think twice before patronizing this establishment.

The location and outside don't do justice to what one finds inside. The bar only has one small TV, this is definitely not the place to catch the game, but this is the place for serious beer drinkers.

Only 15 taps but all are quality selections along with an extensive bottle selection. Food menu is also limited but definitely a cut above bar food. Great food and great beer ignore the vibe.

Great draft and bottle selection. A must for any beer / food geek.

Craft Ale House is a great place to sample some great beers or have an excellent dinner! Only real drawback is the limited seating! The staff is friendly and knowledgeable. Always an excellent selection on draft and a huge bottle list! Offers discounts on 6 packs to go!