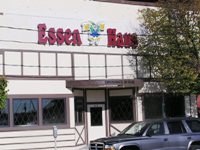 View: Place Reviews
Reviews: 29 | Ratings: 48 | Log in to view all ratings and sort
Reviews by djhowell:

Stopped in here and at Come Back In over Great Taste weekend.
It was late at night, and fairly empty. The oompah band was finishing up their set, and a couple tables lingered. The walls were heavily laden with dark wood and German kitsch, many maßkrugs lined the shelves and hung from hooks in the ceiling. A painted sign above one corner table signified the Stammtisch, or "regulars table". The space was sprawling, yet when empty it had a certain eerie stillness about it. You could imagine the tables full of jovial souls belting out the chorus to Ein Prosit as the oompah band played, but not tonight. For some reason the air was still and the mood was weary.

The bartender was friendly but no nonsense, busying herself with menial tasks rather than chatting with anyone.

Beer selection was ok, pretty much the typical German standbys. Mostly the big 3, Spaten, Hacker-Pschorr, and Paulaner, but one Ayinger, Jahrhundert. Also Hofbräu, DAB, Krombacher, and Warsteiner. Oddly there were still 2 Maibocks on tap at the beginning of Oktoberfest season, and the printed tap list was 3 months old. Guessing the selection doesn't rotate all that much. Spaten Okto was on, but I went for my go-to, Würzburger Hofbräu Pils.

Overall it was a good experience, except for the working lady that followed us from the Come Back In, which the bartender guessed was "probably a prostitute". Ya don't say...

German themed bar and restaurant. Inside has a feeling of a college town bar. The decor is okay but the atmosphere was fun while we were there. Did not partake of the food while were there. The big draw is "Das Boot" or basically glass boots of craft beers. Good selection of craft beers, mostly local but a few national beers. They will make you sign a form and take your credit card in case you break one of the boots, they're a bit pricey. On the other hand you can buy boots from them, they have a number on hand.

Was at the biergarten here for a brief bit during a great taste pre-party. The beer was Revolution and it was only 2 bucks a half liter. In retrospect I should have stayed there all night and sucked the tap of Maerzen dry.

Didn't go in, or eat. Just slugged a beer listening to the German band they had. I liked the atmosphere, not as authentic as it should be but fun in a sense. Just wish it was always 2$ half liter night there. Saw the taplist for normal hours and it is just a decent mishmash of German beers.

I love this place, just like I love all German bars. Fun atmosphere, German beers on tap, large selection of German food. Service is pretty good (and all wearing German outfits), and the selection is pretty good too. Only thing I don't like about it is the price - 15+ for a sausage plate/schnitzel with sauerkraut and potatoes. Oh well, I'll still go whenever I can. Also it's attached to another bar next door, the Come Back Inn, which has a vastly different menu and beer selection but is also really good.

A great place to visit, even though it’s sort of a chain. The ambiance is great - live polka music, German decorations and stuff all over the wall, and an overall great time to be had with the huge Das boots and everything else. The service was quick and friendly. The selection is pretty good for a restaurant - but hey, it’s German! The food was good, not the best German fare I’ve had, but still good especially the potatoes and sauerkrauts. Typical German beers on tap - nothing mind-blowing. The value was about average, and overall, I’ll definitely be hitting this place again whenever I visit Madison again.

Very fun place. Kinda divey, but very large. Great German food and beer selection. It's about the whole experience. The music, the beer, the food, the boot. It's definitely a big draw.

That all being said, I still can't put my finger on exactly how I feel about the place. Almost like they found a formula that works and now it's just on cruise control. That might be part of what makes it so appealing as well. Who knows? Oh well, I am still going to frequent it every time I am in Madison, but there are a dozen other bars that I would rank well above it.