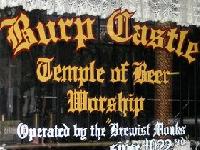 View: Place Reviews
Reviews: 46 | Ratings: 62 | Log in to view all ratings and sort
Reviews by moodenba:

My spouse, our son and his girlfriend, ventured out to NY City on a December Saturday. We encountered a phenomenon known as "SantaCon". Literally hundreds of Santa-themed revelers crowded the streets (and some bars). We entered Burp Castle about 6:00, when it was almost empty. We found a table in a quiet corner and ordered beers at the bar. There are about a dozen well chosen draft beers, emphasizing Belgian styles. It's a pleasant place that wants to be fairly quiet. When about eight (fairly well behaved) Santas came in and had lively conversation, there were some shushings from the management. There is only limited food (occasional bar snacks). Burp Castle is just down the street from McSorley's. Burp Castle is worth a visit for the low-key ambiance, the beer, and the murals. Jimmy's 43, next door, is closed indefinitely, but that would be worth a visit if it reopens (they served food). Years ago, we had a glass of cask dark mild there (US craft-brewed) that was gravity-fed from a pony keg sitting on the bar.

It is worth a trip to this subterranean drinking hole just to see the murals.

Shhhhhhhhh.
The beer list (draft and bottle) could be a little more expansive. Nothing too unusual or daring for a bar that specializes in Belgians.

I came here with my dad at 4:00 p.m on a Saturday afternoon. They were late to open, however, as soon as they did, the place got filled up with about 10 customers. It's a tiny place, so it's good to come during slower hours. What a great vibe if you are looking for a more serious and quiet hang. No obnoxious frat boys and loud music here! A mostly older and mature crowd engaged in quiet conversation. The place is darkly lit with great murals of Belgian monks and renaissance laymen getting sloshed on beer. Yes it's true that the bartenders sush the crowd when it gets loud. It's not done in an overtly rude way and is mostly amusing. The service is adept. The bartender was not overly friendly, she mostly kept to herself and did not interact with customers. However, she was prompt in service and seemed to know her beer. Being that it's a tiny bar, the selection is not huge, however, it is all of the finest quality. Mostly Belgian beers along with some American craft beers. I had a Lucifer and a Tripel Karmeliet; had both on tap and in a goblet and enjoyed them. I will definitely go back!

Gone are the days when the bartender wore a monk's robe, much like the Gregorian chants. Still this little bar is a nice place to venture for a quiet drink. The bartender will shush you when you get loud.

This little hole in the has a dozen beers on tap (mostly Belgian ales). I don't know if they still have a bottle selection as I usually drink from the tap.

The atmosphere is laid back and quiet. There's no television to watch 'the game.' THis place is meant to be an escape from the city and it does a good job with this.

Definitely worth a visit.

I loved the theme/atmosphere of this place. My girlfriend hated it. We spent the better part of our time here debating the appropriateness of shushing. I think in this setting it's totally warranted and I got a kick out of it. Where my argument fell apart was with the bartender (I would have scored the service even lower but I'm giving the other bartenders the benefit of the doubt). She spent the whole time talking to one patron and largely ignoring everyone else. When she poured me the Saison Dupont instead of the Dupont Monk's Stout, I heard her say to her friend that it was my fault for not enunciating properly. My feeling is that if you listen to more than one word of someone's order you'll have more success. So in her case, I agree with my girlfriend: being shushed by this particular bartender was very annoying. But with a different bartender I bet I would really really like this place. I generally prefer quieter bars. Lots of hipster college kids here though. The selection was small but high in quality. A bit pricey, too. Side note, this place had some of the best/nerdiest bathroom graffiti ever. Doctor Who references, Harry Potter references, math nerd humor. Great stuff.

During a recent (January 2012) East Village Pub Crawl, I sought refuge from the frigid night in here; though called Burp Castle, this unique little venue seems more like a monastery. Beer and monks!

You enter a hushed and dimly lit room adorned with murals and a well worn Persian rug. In the background is the melodious hum of a Gregorian chant. The weathered wooden bar is small, yet intimate. Garbed in the trappings of a monk, the alert bartender solemnly inquires as to which one of the twelve taps of Belgian elixir you will have. I whisper, “Maredosus tripel, please.” This procedure is to be done sotto voce as Burp Castle is a place that mandates a quiet contemplation. “Sssssh,” admonishes the bartender-monk to any patron daring to interrupt the solace of the Castle with loud conversation. This will not be allowed. Sssssh!

It may be considered over the top by some; however, if you consider drinking excellent beer to be a religious experience, then this is your venue. Is Burp Castle a unique place to quaff great beer in a truly unusual atmosphere? Yes! Ssssh.

Very cool, very unique beer bar. Very small and quiet. Always interesting selection of maybe a dozen taps from the US and all over the world (this week they have Hitachino Nest, Mikkeller, Delerium, Allagash and bunch of other stuff I forget). Bartender dressed in Monk's robes. Fair prices. If you're a craft beer fan you definitely need to stop by here at least once. More likely often if you can because the tap list changes frequently and you never know what's gonna pop up.

First time I was here (last year) I came with a fairly big group (about 10) and there was another big group here of really touristy/fratty disposition. My group was pretty mellow but the bartender had to repeatedly tell the others to quiet down, not something you see very often in a bar in NYC. Needless to say they started getting louder and flat out bullied the bartender, a slight/hipster sort of fellow. These brawny frat boys intimidated this guy into the ground. Also not something you see in a bar anywhere really. My friend who tends bar downtown had a similar situation, and though his large size didn't hurt, the baseball bat he pulled rapidly and menacingly from under the bar did the trick with alacrity.

Not quite the most clever name ever, but this is a clever, quaint little place. And I mean little. In the Lower East Side, NYC, adjacent to two other beer bars (Standings and Jimmy's No. 43), this place is almost unnoticeable from the streets, but serves exclusively good craft/micro beer, though not too many selections. I didn't see a menu when I was in there, so I don't think they serve food at all. Nice atmosphere, but the bartender was pretty inattentive...I was one of about 4 people in there, but the others were regulars and got all the attention while I was left in the desert. I'd like to pop back in here at some point, but if the quality of the service hasn't changed, I'll have no problem passing it over.

We visited the Burp Castle after seeing a Saturday night show. We got there around ten, and came into a busy environment. The front door opens to the florally carpeted bar area, which is enclosed in but a single room (excluding a small, gated outdoor patio). The bar itself is on a corner, and creeps around the room at a ninety-degree angle. Seating between twelve and fifteen, the bar is wooden, with ornately carved structural elements of support, and accents of patterned metal shapes. The rest of the room is taken up by roughly fifteen two-person wooden tables, which each have a thick lip, so as to, presumably, curb any spillage. The walls are decorated in sweeping frescos of various scenes, including a Belgian beer cellar with monks and patrons, and a shipwreck scene. The wall behind the front door is painted in castle stones, with a small stone gargoyle sitting in the only window. Decoration is otherwise sparse, with a placard behind the bar reading, "No loud talking allowed. -Whispering Only- By Order of the Brewist Monks." The lighting is moderate, with low hanging lanterns, lamps on the bar, and candles on the bar and tables, bringing light to the space.

There is really no food to speak of, but they do have free Belgian style French fries on Sundays, Mondays, and Wednesdays from a local eatery, for an hour and a half.

The beer menu is quite respectable, with twelve taps and about three times that in bottles. The taps are predominantly Belgian, in going with the style of the place, with a good variety stretching across the spectrum of Belgian beers. We each started with a glass of Gouden Carolus Tripel. We must have kicked that keg, because they wiped it off the board and immediately replaced it with something different. In the time we sat there they replaced three different beers that had been finished, and each was replaced with something entirely new (and Belgian!), which is super cool. For the second round we got the St. Bernardus Christmas Ale (me), and a Young's Double Chocolate Stout (the fair lady), respectively. They also serve some wines, but that selection looked rightfully meager. The bartender was quite knowledgeable, and was dressed in a traditional monk's garb. Thinking back, he actually seemed to be the only one working there.

Overall, we had a great time at the Burp Castle. The selection was great, if you are a fan of Belgian beers. Although there was no food, it seemed appropriate. The environment and atmosphere is quite unique for a first timer. There is no music, so the sounds are composed of conversation. If the volume of the crowd, or of a particular individual, gets above a reasonable volume (as is warned by the plaque), the bartender immediately, and loudly, shushes the patron/s. He is quickly joined by the rest of the crowd, which makes for a fun, and strangely awesome, ambiance.

I can't believe this is the place that my homebrew club meets and i've never reviewed this place.

Very interesting place and on probably the best beer block in new york, which also inlcudes McSorely's, Jimmy's 43 and Standings. Burp Castle is the simplest of the bunch in terms of decor. One very dark, relatively small room. Very interesting but not too big tap list. Not even sure they have bottles.

The place is very belgian, serving a majority of belgian beers and keeping the place monk-quite, actually shushing patrons every few minutes.