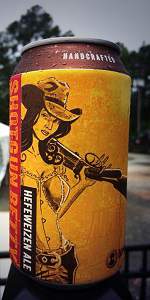 Notes: Shotgun Betty is a sexy, tough cowgirl who is always armed and dangerous. Don’t be fooled by her good looks, she will have you for an appetizer! That’s why we picked her to represent our Hefeweizen. Shotgun Betty is a wheat beer with rich, banana-clove nose and refreshing dry finish. Sound good? Try one. But beware, once Betty gets a hold of you there is no escape.
View: Beers | Place Reviews
Reviews: 106 | Ratings: 504 | Log in to view all ratings and sort
Reviews by Yeldarb92:

I remember going to a little hole in the wall called Im Fass. This was back in the day when I was in the Army in Germany.
They served a hefeweizen with an orange slice floating on top. This, combined with the best soup and ham sandwich in Giessen, made me very happy.

This Shotgun Betty brings back memories of Im Fass, which is long gone now. I need to get some oranges to slice for the top of this beer. If only I could make soup like the owners did. God they must be 70 or 80 by now! There was something about that place that was like home. I hope they are still together.

But enough nostalgia. This is one fine brew. Yep Bananas and cloves. Some slight bitterness you would expect from a hefe. Head is more fluffy and short lived than than most people might like. But real hefeweizen is not known for sporting a rich foamy head like a stout. At least from my experience with German Bier.
I will be getting this on a more regular basis when I get a Job. Ha!
At 5.8% this is a little stiffer than German hefeweizen.

I did find some Licher hefeweizen at Aldis one time. But they are notorious for not having the same beer all the time.
For the record, I lived less that a K from Lich.

It is very satisfying to have access to such a good beer.

Rich, spicy, banana taffy. Smooth and easy to knock back. Clove and banana combo are at a perfect level. Yeast is a bit pushy though the bready maltiness is pleasing on the palate. A good sip but just a half step behind the originals / German counterparts. Well worth a go.

Notes via stream of consciousness: Nice label. Pours like an American hefeweizen with two-fingers of frothy then rocky off-white above a cloudy golden-amber body. The aroma is phenolic, but of course it's supposed to be, with plastic and clove and wheat and a bit of berry and banana. Green banana. Not bad. The flavor follows the aroma pretty closely, but there are some additions that I'm finding that round it out: there's a light edge of caramel to the malt (which might even just be from caramelization of the wort in the kettle), some pear and apple in the fruitiness, a hint of spiciness from the yeast, and the bitterness, which of course you can't smell, and which is minor here. There's also a very light hint of smokiness way in the background but it comes forward a bit more in the lingering finish. It's a little bit unusual, but I've had other hefeweizens like this, and in a way I find it quite charming. Had this come from a small brewery in Bavaria everyone would love it! So why not love it here? Because it's not like the best known hefeweizens? That's ridiculous. To quote Carol Stoudt, "Why make a beer that tastes like everyone else's?" This is just fine. It's fairly complex, it's easy to drink, and it's refreshing. Medium-light in body and gentle effervescent - I always forget about the mouthfeel until the end. There are better, more malty, or more yeasty versions out there but this is perfectly acceptable on its own. Probably worth trying. - Oh, one additional note post script, the lacing is limited which hurts it's appearance.

A- Pours a hazy light amber color with a 1/2 inch off-white head that retains decently before becoming a thin ring around the edge of the glass and minimal surface foam. Non-resilient lacing leaves a couple short-lived clots behind.

T- Flavor follows suit with plenty of fruity esters from the yeast. Quite sweet with minimal bitterness. There's even a kind of vanilla wafer thing going on as well as lots and lots of banana.

M- Milky in texture with medium-low carbonation and a body leaning toward the lighter side.

O- Though this brewery's choice of branding had me questioning whether or not their beer is legit, this second offering I've had from them is making me realize you just can't judge a book by its cover. Solid beers thus far.

Poured from a can into a clear beer mug.
Looks hazy orange yellow, White head that dropped quickly.
Smells slightly malty and fruity.
Tastes bready, sweet, banana.
Mouth feel, creamy, dry finish.
Overall, good example of a Hefe, but, wheat isn't one of my favorites, so no, I probably wouldn't order again.