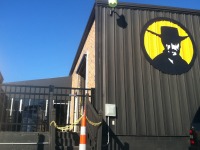 Lonerider has some really good beer. Usually a wide sampling of most styles.
Including seltzer.
The taproom is small, but, there is a ton of outdoor seating.
Dog friendly.
Service is always quick and friendly.
And there is always a good selection.
Six packs and growlers are available.

Friendly and knowledgeable staff, with a good variety of beer. 10 -14 beers on tap. Great atmosphere with a large tent outside for events. Family and dog friendly.

I really liked this place. Lots of seating. The facility is huge with plenty of seats at the bar. The quality and selection of beer was fantastic. The staff was also kind and always looking to educate you on the beer selection. Very welcoming place.

"The Hideout" is almost always loud and crowded... so casual conversation is difficult and service is generally slower than you'll find elsewhere.

Honestly, the Lonerider taproom and their tour really suffer in comparison to other Raleigh/Durham brewery tours/taprooms which is a shame because they do make some good beer.

The elephant in the room is the uhhh... monochromatic crowd. Perhaps the times I've been have been extreme outliers, but each time there has been absolutely no ethnic diversity among the customer base.

Their stuff is readily available on tap and in cans at most other local places, so short of a special keg release or other event going on there, I'd just as soon have something they make at a regular bar or restaurant.

Tucked away in an industrial park, on the backside of the brewery building, this place is a cool hangout. Huge tent of the back of the building for a ton of outdoor seating. The bar/tasting room has a bunch of tables in front of a decent sized C-shaped bar. 8-10 beers on tap at any given time, with some of the seasonal/one-off bottle offerings for sale to go, as well as growler fills and 6-packs. Staff was super friendly, and this place was hopping on a weeknight, so I can imagine it gets packed on the weekends. Good beer, good atmosphere, and good people.

The only beer that really stood out was the pale because it was buttery which is really not a good stand out. All other beers were ok and I couldn't find one to go full pint on (hefe if I had to).

Close to the house. Jackie is a fantastic, attentive, and overall nice bartender. This place tends to get crowded quickly after work (all of the 9-5ers from the Trianle).

No food served on site, but they tend to have great food trucks that tend to be on premise a lot of the time.

Haven't taken an official tour, but have been through three brewery on other errands.

Really enjoy that you can have a 24+ ounce mug laser personalized for when you come into the Hideout.

Movie night events are fun.l; projector onto a truck? Great!

My birthday weekend saw my fiancé and I going on a small brewpub tour of Raleigh, North Carolina. When I think of the Tarheel state, I most certainly don’t think of beer right away. But the state capital has quite the little scene growing up quickly. All they need is a couple of small boutique, extremely snobby brewpubs to round out their offerings.

You see, every town needs four tiers of brewery to be complete. You need the shitty spots to make you appreciate the good ones. You need the tried and true (and cheap) middle-of-the-road option. You need the aforementioned expensive spot that only serves their beer in fluted glasses.

And then you need a spot that is extremely high quality, always reliable, and not too expensive. This is where Lonerider comes in. My fiancé and I almost skipped this spot on our Raleigh brewery tour due to the fact that it’s a bit out of the way and we’d already had a lot of their beers in the bottle. That would’ve been a mistake!

Lonerider turned out to be one of my favorite non-food-serving breweries that I’ve ever been to. There’s not much to the tap “room.” It’s basically a tent set up off the back end of the brewery with a bar, a few tables, a back porch, and a bunch of fans trying to keep fans of the brewery a bit cool during the hot North Carolina summers. It’s simple and rustic, and it’s all you really need if the beer is good.

I was very impressed by the quality of the beer served here. When I visited there were five beers on tap, and a sixth available in bombers. The three standards are Sweet Josie, a many-award-winning nut brown that is sweet, smooth, and delicious; Peacemaker Pale, an average but tasty offering; and Shotgun Betty, a wheat beer that is somewhat spicy and that I enjoyed even though I don’t typically enjoy wheats. Their two seasons included True Britt, an English mild that was malty and awesome, and The Preacher, a Belgian saison that was refreshing and spicy all at the same time, and also my favorite of the bunch.

The bartender is obviously there all the time. Photos of her hang on the back wall, standup cutouts stand by the side of the bar, and most everyone seems to know her. She does a great job.

There was as food truck during my visit, but I didn’t get to partake and don’t know if that is the norm or the exception. Either way, the beer is what makes this place great. I highly recommend stopping in.

I visited Lonerider on a Saturday when they were doing tours. I am a fan of their beers and this was the brewery I was most excited about visiting. The bartender was incredibly friendly and we hit things off pretty well. I went in the spring and they didn't have any special beers on tap, so I picked from their standard lineup. The bar is in what I would consider a garage and it is decorated as such. The only air circulating is the big fan in the corner and even with the garage door open, the place is hot. My friend and I took our beers outside and waited for the tour to begin. Inside there was not enough seating for the group that had gathered, so a lot of people were hanging outside trying to decide if they wanted to overpay for a grilled cheese from a food truck.

The tour was a joke. When I pay to go on a tour, I expect to get a sample of beer or a free pint or at least a pint glass, maybe a sticker, a discount on beer...something, but this was highway robbery. Other breweries would be giving this tour for free and discounting beer. At least the brewery is smaller, so the tour only takes 15-20 minutes. Said 15-20 minutes was spent with a guy who was a little drunk and definitely couldn't land a joke to save his life. If you were wanting to start home brewing, this tour may be worth the price of admission, but if you have been on any other tour, then there is no value here.

Sadly, I have only been to the brewery once, and even though it is 15 minutes from my house, I have not been tempted to go back. If you think I have missed something or if things have improved, let me know and I will try again.

Lonerider Brewing Company in Raleigh, NC
Brewery rating: 3.79 out of 5 with 2125 ratings