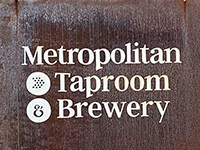 This place is a visual masterpiece. You go through a maze of construction (at least when I was there in 2018) and you think, “is it even worth it to walk through this mess?” The answer is definitely YES. I finally opened the main door and it reminded me of my favorite movie as a child (Willy Wonka and the Chocolate Factory) when Gene Wilder opens the door to the main chocolate room and you are visually blown away by the grandeur (at least in 1974 when I first saw the movie as a child). I was expecting a typical nothing special taproom but this place was visually impressive with an airy timber loft feel with huge floor to ceiling windows looking out to the Chicago River. It was great just to be there. Oh yeah, the beer was pretty good too.

Plenty of parking but to get to the actual brewpub space you have to take a very long walk through what seems to be a perpetual construction site. Loose gravel, etc. Once you get to the taproom, though it's very nice. Modern--concrete/glass with communal seating. Floor to ceiling windows with views of the river and city. The beers aren't really my style but at least it's a cool spot that's kid- and dog-friendly.

The new site on Rockwell is currently under construction. Follow the signs on the street through the construction site, to the taproom in back, it's right on the river.

The space is immaculate and had me awestruck from the moment we walked in.
Floor to ceiling glass windows with a serene view of the river and shimmering trees, the sears tower was a mere blip above the treeline. Several blue herons glided from one bank to another, and the occasional rowing team powered by. It was practically a hidden wildlife refuge.

The new space is really something else. It's open and airy to say the least, with pleasant acoustics thanks to heavy wood beams overhead that absorb the crowd noise. The bar itself is rough hewn wood that's been sanded down with a smooth epoxy resin surface adding a smooth glossy sheen. It extends out into the space island-style, around a bank of taps set into a cold storage wall in back. A view of the brewhouse can be seen through new windows in an old brick wall.

Selection is good, with 8-10 house beers on opening day, a couple i've not seen before. The classic Oktoberfest is a must-try, one of the better ones made in the city. 3 draft sizes, 4 oz. taster, quarter liter, and half liter. Consistent quality has always been Metro's strong suit, and they were an early proponent of freshness dating their packaged beers.

Service was friendly and chatty, a couple familiar faces from Smallbar were running the bar. Tracy the brewery owner was chatting with friends and patrons, and offered free pizzas for everyone on opening day, which was a very nice gesture.

Overall this taproom is destined for greatness. I'll be here many times from here on out, it's a very welcome addition to the Avondale area. Local BYO food options: Cafe Tola, Pisolino, Taqueria Traspasada, Taqueria La Zacatecana, 90 Miles.

2018: Metropolis Coffee collab beers have started flowing, it was bound to happen sooner or later...


Metropolitan Brewing in Chicago, IL
Brewery rating: 3.87 out of 5 with 1570 ratings