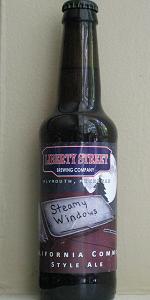 Notes: A "Steam" style beer made with a lager yeast and fermented at ale temperatures and then aged at lager temperatures for a smooth, clean finish.
View: Beers | Place Reviews
Reviews: 16 | Ratings: 52 | Log in to view all ratings and sort
Reviews by bobbyr5:

T: Initially quite sweet, though not overpowering. A quick transition to a slightly bitter finish leaves a nice, crisp feeling with a possible lemon/citrus taste.

F: Medium-light body, but the carbonation was quite soft.

O: A crisp, refreshing drink. The name is also a clever nod back at it's origins.

Granted I've not had very many, but Steamy Windows is the palest of all the Steam beers I've tried; it lacks the solid copper tone that comes to mind with all the others (including the style's grandaddy, Anchor Steam). This is yellow as a summer's sun and only get's paler against the light. It can hardly support its haggard head. Should I be concerned?

Perhaps... Steamy Windows has an unusual bouquet, one that is again not necessarily what I recall from other examples of the style. There's more fruitiness than anticipated, all credited to esters brought about by fermentation (not the hops). It has a slight apple cider-like tang.

This beer should offer broad appeal but it's not because it has a great flavour - the exact opposite: it has little flavour. As indicated in the appearance, there really isn't much substance to this ale (which actually uses lager yeast). The fruity esters continue on the palate, along with a very slight woodiness and next to no malt flavour.

Steam beer is an excellent option for brewers looking to attain sessionability without losing mouthfeel; it necessitates both caramelly maltiness as well as a pronounced hop bitterness. This example, however, delivers only the bare minimum of each and makes for a beer too dull to bother with more than one of. It's rare that a 12oz bottle doesn't leave me wanting more.

Craft beer has a certain quality that cannot be replicated by industrial, multinational breweries nor by homebrewers and starter kits. As a microbrewery, you never want your beer to resemble either of those extremes; Steamy Windows, the only beer I've yet to try from Liberty Street Brewing, seems like it could have been made by either. That's not a good first impression.

Ordered a pint of this last night at Liberty Street and then promptly ordered another one. I don't know why they call it an Amber Ale, when for one, it isn't Amber, it is creamy yellow in appearance, and for two, it doesn't taste like an Amber Ale.

Anyways, I don't usually judge how much I like a beer or how I rate it based on style guidelines so I won't start now. It has an interesting color to it. Yellow, coppery, and hazy. Not a lot of activity as far as carbonation apparent in the pint.

The smell is citrusy, orange and lemony. Slight buttery aroma. My mouth is watering by now. A really good smelling pint.

Taste is hoppy, smooth, wet. Great tasting. Not overly complex or challenging but really good. It seems to me that Liberty Street just brews solid gold. I had no idea what I was ordering when I said I wanted a "Steamy Window" but I'm willing to do that here because I know they don't brew garbage. Another great brew. I just wish more people could experience these brews instead of just people in southeast Michigan!

L - It is golden in color and slightly hazy. It is topped with several inches of thick, creamy, off-white head.

S - The smell is not strong. I get some floral and grain notes.

T - It starts out sweet. Then some grain and malt come through. It finishes mildly bitter.

O - I not not have much experience with this style. I think Anchor is the only other that I have tried. After reading the description it seems to follow the guidelines. It just seems like a boring style to me. It is easy drinking. It kind of reminds me of a Euro lager.

This beverage is golden and lightly cloudy in

Citrusy smell with a malty backdrop.

I would like a bit more carbonation to match the style better.

I could have another, this is tasty

T_Same as the nose.Earthy grain.grassy hops and a touch of honey in the finish. Bit of sweetness. Mildly bitter.

D_Very easy drinking. Quite flavorful too.

A: Golden amber body, slightly hazy. Some visible carbonation. HUGE, billowy head, decent retention, recedes to a layer of froth on the surface that has shape and size!

T: Sweet malts, but not too sweet, NOT cloying at all. Spice and fruit, maybe banana, come through ever so slightly. No happiness, but slightly bitter at the end to cut off the sweetness for a crisp finish.

O: Holy Shit, Batman! This is amazing beer. It is definitely California Common, aka 'Steam Beer.' But the added bonus of the light spicing and fruit esters make this really refreshing. The sweet to bitter balance could not be more perfect. I will go back to this again and again....when I am in Michigan. #pureMichigan

I picked up a bottle of Liberty Street's Steamy Windows last week for $1.59 at The Lager Mill. Liberty Street just started distributing their beer this year and I already tried Red Glare, so it's time to try their other bottled beer, so lets see how it goes. No visible bottling date. Poured from a brown 12ox bottle into an imperial pint glass.

A- The label looks ok and it fits the name of the beer nicely. It poured a hazy golden yellow color that took on a slight amber hue when held to the light with a fingers worth of white head that died down to a thin ring that eventually faded to nothing and it left hardly any lacing. This beer looked pretty average, the color was nice, but the head was disappointing.

S- The aroma is pretty light and subtle, it starts of with some sweet malts that impart a grainy and white bread like aroma. After that comes this weird earthy aroma that i assume is coming from the hops. The aroma was average at best, it was pretty dull and the weird earthy aroma wasn't that pleasant.

T- The taste seems to be pretty similar to the aroma, it starts off with some malts which had a higher amount of sweetness and impart some bready, stale grain, straw, and slightly skunky flavors. Towards the end comes a light earthy hop flavor followed by a slightly light amount of medium bitterness and it had a sweet, earthy, and stale grain like aftertaste. The taste of this beer was below average, it really didn't have any redeeming or memorable quality's.

M- A little smooth, very crisp, on the lighter side of being medium bodied with a nice medium amount of carbonation. The mouthfeel was ok, it seemed pretty true to style but it could have been smoother.

Overall I wasn't a fan or impressed by this beer and I thought it was a below average example of the style. it was pretty dull and somehow managed to be rough around the edges, it didn't have all the aspects that I look for in the style. This beer didn't have good drinkability, it wasn't that smooth and the taste for sure didn't hold my attention, one is more than enough for me, I don't want to drink another one. What I liked the most about this beer was the mouthfeel, it seemed pretty true to style but it could have been a little smoother. What I liked the least about this beer was the taste, it was pretty simple and dull and the flavors didn't seem nearly as clean as they should be. I wouldn't buy this beer again, it's not worth my time and I can't say that I would recommend it to anyone. All in all I was pretty let down with this beer, so far Liberty Street has been disappointing me, both the beers they have bottled have been pretty underwhelming with this one being the worst of the two, I know they can make some good beer, I have had them before, but if they keep bottling these bland beers instead, it's not going to work out good for them, better luck next time guys this one needs some work and so Far it's my least favorite beer from Liberty Street.


Steamy Windows from Liberty Street Brewing Company
Beer rating: 78 out of 100 with 52 ratings