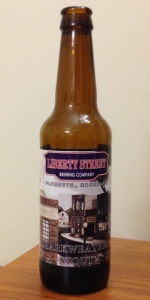 It has quite the banana taste to it, it is quite liquidy for a stout but still has great aromas and flavors of stronger fruits.

Pours a sold dark, near black, with hints of mahogany red at the edge. Pillows of head form; off-white and persistent.. Initially at 2.5 inches., but settling to 1/8 inch. The nose suggests dark-roasted malts, cooked milk, and chocolate. Medium body, with nice lingering, although the body is lighter than expected for a stout. The palate suggests cacao nibs, malt and distinct bitter notes, with a very pleasant lingering. Belgian lace did form. Carbonation is pleasant and the ABV is not noticeable. Very pleasant and appealing, but not noticeably unique.

The looks seems to fluctuate a bit. It looks thin on the pour but settles with a good strength and is almost as dark as it gets. It appears spritzy but ends up growing quite a large medium brown head that settles to a creamy and thick finger, resting at that height for the rest of the session. It leaves some good patching behind.
The first whiff is something odd, almost vegetal. That seems to disappear with a little time, then I get tang and a somewhat nondescript malt. A hint of roast or char show up initially, but every sniff after gives off a strange note almost of burnt apples. It almost works, but it's off a bit.
The taste works pretty well. It's pretty much straight up roasty malt, dry with a hint of woodiness, just a little char to it. There may be just a slight floral bitterness, which adds a touch of balance. There's a vague note of tang, but it's not strong.
The body is firm, and the carbonation isn't too terribly heavy, but it's too strongly crisp overall, nearly spritzy. It runs fairly dry all the way through.

served in a pint glass. from notes.

a - dark brown in color with a thick foamy head. leaves tons of sticky lace in the glass.

s - grainy and malty sweet. some hops, some coffee.

t - strong roasted malt presence with a slight hop bitterness in the back. nothing fancy, but at least seems well balanced.

o - goes down pretty easy. would definitely have again.

on a side note, this is now known as starkweather stout.

A_Pours black with reddish brow highlights around the edges. Thick khaki colored head that quickly dissipates into a thick ring.

Surprised there isn't more reviews. They don't have a lot on tap (like eight beers) but they all seem to be quality brews. The bartender was very helpful. He let me sample four beers without me even asking. Two IPAs, a red and a stout. All were very good. Check it out.

I picked up a bottle of Liberty Street's Starkweather Stout a couple weeks ago for $1.69 at The Lager Mill. I've tried this beer a couple times, but since this is the first time that Liberty Street has distributed bottles of it I thought I would give it another try, so lets see how it goes. No visible bottling date, but I think it's fairly fresh. Poured from a brown 12oz bottle into an imperial pint glass.

A- The label looks ok, but it isn't that eye catching. It poured a dark brown color that took on a crimson hue when held to the light with three and a half fingers worth of tan head that died down to a thin layer that stayed till the end and it left a slight amount of spotty lacing behind. This was a nice looking beer, but the lacing wasn't that great.

S- The aroma starts off with a medium amount of sweetness that had a slight lactose like aroma to it followed by some dark roasted malts that impart a pretty big chocolate aroma with a stale malt aroma in the background. Up next comes some light cardboard like aromas followed by some light plastic like aromas. The malty aromas were decent, but there were too many off aromas.

T- The taste seems to be not real similar to the aroma and it starts off with a medium amount of sweetness followed by a loads of dark malts that impart a really chocolate and cocoa powder like aroma. Up next comes some fruity yeast that works surprisingly well with the other flavors and on the finish there's a slightly higher amount of low bitterness with a chocolate and slightly nutty aftertaste. This was a pretty nice tasting beer, I liked the chocolate like aspect.

M- Smooth, a little dry, crisp, on the lighter side of being medium bodied with a higher amount of carbonation that was prickly. The mouthfeel that great, it's needs to be a little thicker and a lot less carbonated.

Overall I thought this beer was just ok and it's a pretty average example of the style, underneath all those unwanted aspects this beer was nice beer, but it could be much better. This beer didn't have the best drinkability, it was smooth and the flavor held me attention for the time being, but i think the mouthfeel would really start to wear on me if I drank multiples, so one is enough for me. What I liked the most about this beer was taste, it was nice and thankfully it didn't have any off aspects that the aroma had. What I liked the least about this beer was the aroma and mouthfeel, they really hurt this beer. I might get this again if I knew it was really fresh, it would be nice to know what if it still has those off aspects if it's really fresh. I'm not sure if I would recommend this beer, but I don't see myself telling my friends to pick it up anytime soon. All in all I thought this was decent, it tasted nice but the aroma and mouthfeel still need some major work. Better lunk next time guys.