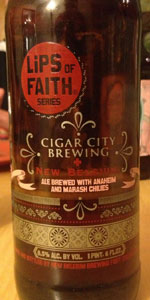 Clear golden color with an attractive two finger head that had great retention before settling to a thick cap. Massive amount of lacing is left down the glass.

Rather timid and uninteresting aroma. A touch of floral and earthy notes. I pick up a little honeycomb as well. Not much going on.

Not sure what they are going for. Probably a mediocre amber ale if not for the chiles. And the chiles do not add that much just a little spice kick in the finish. Seems the brewers thought people would be scared off by them. Has some interesting citrus hop qualitie however that picks up the score a bit.

The feels deceptively light in body. Superb carbonation gives the beer plenty of life without being harsh.

Probably one of the more disappointing collaborative efforts put out there. The brewers must of put out there B team for this effort.

"We're about to light up Florida with this Cigar City collaborative brew. Our Belgian yeast tangos with Anaheim and Marash peppers along with loads of citrusy hops to create an ale full of spice. Aged on Spanish Cedar to salute our mutual love for wood!" Brewed in the style of a Chile Ale. Released as a one-off collaborative effort between New Belgium and Cigar City Brewing in 22 oz. bottle and on limited draft.

Poured from a 22 oz. bottle to a New Belgium Globe glass. Served above 50 degrees Fahrenheit.

(Appearance) Pours a frothy foam head of a creamy pastel white over a moderately hazy amber body with lively and plentiful carbonation. Retention is good and lacing is light and patchy. 4

(Smell) Pale malt aromas with a touch of caramel bread for sweetness. Aromas of peppery, grassy hops with mild fruit notes are complemented alongside aromas of ripe peppers, fairly vegetal and herbal, but they add hints of tingling heat and complement the bit of sweetness. Potency is moderate. 3.5

(Taste) Subtle bready caramel and pale malt body with soft tropical yeast-borne notes is mildly amplified with the flavor, rather than the heat, of Anaheim and Marash chilies, which generate a soft vegetal and earthy flavor as well as bitterness without going overboard on the heat. This beer is relatively easy to drink for a Chile ale due to the accessibility of the flavors and mildness of the chile heat. It finishes on a subtle heat of mild pepper juice before a solid note of dry Spanish Cedar lingers on the back end. 3.5

(Mouthfeel) The texture is oily slick, mildly chewy and softly dry. Carbonation is mellow, generating a smooth frothiness and low crispness. Body is shy of medium for the style, medium overall. Balance is equally earthy and peppery bitter to sweet. The alcohol presence is low and there are no notable off characters. 3.5

(Overall) A well-made Chile beer despite my reservations about the style itself. I think these two breweries found a solid niche in that chiles can be used to generate bitterness and flavor as well as heat, and thus come in handy as the occasional unique additive. We need to see more beers like this, and less that focus entirely on the extreme heat shock-factor. This beer was a pleasant surprise. 3.5

A: Clear, golden pale (between a pale and a deep gold) color. Thick head that lingers on the glass.

T: Clean taste to start with some bitterness and malt jumping out. Then the chiles appear, which are really mild and subtle. The malt carries through and leads into a warming feeling in the throat.

M: Light on the tongue initially but there is a dried out feeling at the end.

O: A mild beer with some character, but nothing that jumps out as unique. You'd expect more from the creative people at NB and Cigar City. Disappointing overall, which feels like a half-assed effort. I wish these two companies would have pursued an IPA collaboration or something bolder.

On tap at Lucky Baldwins Trappiste in Pasadena, CA.

Pours a hazy orange with a foamy beige head that settles to wisps of film on top of the beer. Tiny dots of lace form around the glass on the drink down. Smell is of malt, grain, fruit, and chile aromas. Taste is much the same with fruit and chile flavors on the finish. There is a mild amount of hop bitterness on the palate with each sip. This beer has a lower level of carbonation with a slightly crisp and medium bodied mouthfeel. Overall, this is an above average beer with a somewhat odd combination of fruit and chile characteristics.

So in theory the heat from the peppers and the golden ale backbone with the malts would go nicely together, but instead of heat I got vegetable produce taste. The result is a salad beer, that isn't terrible, but could be much more! Maybe some heavier hops would add a little spice? Regardless nothing special

I picked up a bottle of New Belgium's Cigar City Collaboration from their Lips of Faith series last week for $11.39 at The Lager Mill. I'm not a huge fan of the Chili Beer style, but I've been wanting to try Cigar City Brewing Company for a long time and this seems to be the closest thing I can get my hands on, so lets see how it goes. No visible bottling date, but it just showed up recently, so I think it's fairly fresh. Poured from a brown 22oz bottle into a snifter.

A- The bottle looks ok, it's pretty typical for the Lips of Faith aeries, and other then the fact that it says Cigar City on it I don't think it's too eye catching. It poured a nice and fairly clear brighter golden color that took on a golden orange color when held to the light with a finger and a half worth of white head that died down to a thin ring that eventually faded away and it left some spotty lacing behind. This was a nice looking beer, but it could use a little more head and lacing.

S- The aroma starts off with a medium amount of sweetness followed by a malty aroma being the first to show up and imparts a slightly grainy and bready like aroma followed by a nice fruity aroma with maybe some citrus hops in there also. Up next comes the yeast that imparts a pretty light Belgian yeast like aroma followed by some pepper aromas which are on the lighter side of medium and they impart more of an earthy pepper aroma then a spicy hot aroma. This beer had a pretty nice aroma, the peppers weren't too hot and overpowering and it seemed a little complex.

T- The taste seems to be fairly similar to the aroma and it starts off with a medium amount of sweetness followed by some malty aromas being the first to show up and it imparts some grainy, bready, and sweet malt like flavors with some fruity flavors showing up next with some citrus hop flavors seeming to stick out the most imparting a nice hoppy citrus taste. Up next comes a very light amount of that Belgian like yeast followed by a lighter amount of medium peppers that impart a pretty earthy and vegetale pepper flavors with just a slight bit of spicyness that lingers a little in the back of my throat in the aftertaste with a medium amount of bitterness and some hoppy citrus flavors in the aftertaste. This was a pretty nice tasting beer, the peppers show up just enough to notice them, but not enough to really affect the drinkability.

M- Fairly smooth, well hidden alcohol, clean, crisp, medium bodied with a medium amount of sweetness. The mouthfeel was nice and it worked well with this beer.

Overall I thought this was a pretty nice beer and I don't think it's the best example of a Chili beer since the heat is very low, but I tend to like them better this way and I think it keeps the beer pretty drinkable by adding pepper flavor but not much heat. This beer had pretty good drinkability, it was smooth, clean, crisp, not filling, and the taste did a nice job at holding my attention, a full bottle might start to wear on me, but I thought it was good just to split it and I would recommend it to anyone who likes this style on the lighter side, people who like it spicy will be let down. What I like the most about this beer was the balance, no aspects were too overpowering in this beer. What I liked the least about this beer was the appearance, it wasn't bad, but it wouldn't hurt to have more head and better lacing. I don't think i would get this beer again, I'm glad to have tired it, but I don't think I will seek it out since it's a little pricey for what you get. All in all I was happy with this beer, it wasn't the best Chili beer I've had, but I still enjoyed it and I was glad to have the chance to try something that Cigar City had a part of and I hope to try some of their own beers some day. Nice work guys, keep up these nice and innovative beers.

A-Medium straw color a bit like a quality pale ale with some additives.
S- I get some grapefruitiness and general citrus aroma and maybe some bread as you pull away from the glass.
T- It tastes like a citrusy high quality IPA, but a chile beer? MEH!! Not knocking the taste mind you, just not what I expected and not really a chile beer taste. Was definitely expecting more from these two imaginative brew masters. I really don't get much chile at all so if you are going into this one expecting a Cocoa Mole type experience...forget it. Like I said, it doesn't taste bad at all, just not a true chilli beer. BTW, the 8.5 is very well hidden in this one
M- Crisp and clean...very refreshing I must.
O- I liked it. A great "mowing the lawn" or hangin' out at the pool on a hot day beer. But definitely not in the same class as most of the releases by these two fine breweries. Should you try it...yes. I would buy it again for certain because the price is right ($10) and the ABV is right (8.5) and the taste is pretty darn good. Just don't judge it for what they are claiming it is, judge it for what's actually in the bottle. A good tasting and very refreshing IPAish beer.