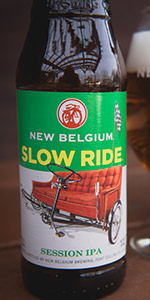 Poured into a becher pint glass, the appearance was a semi-golden yellow color with a slight transparency about it. Some carbonation could be seen rising at a moderate pace to fill a semi-foamy white head. Dissipated nicely to leave some stringy sliding lace.
The aroma had some sweet to bitter onion bits, light danky grass, and a little bit of citrus, pine and biscuits.
The flavor was a fine blend of the sweet to bitter to dank pulling together the onion, citrus, pine and biscuits. Aftertaste of the danky onion, pine and biscuits.
The mouthfeel was between light and medium bodied with a great sessionability about it. Carbonation felt appropriate and non-distracting. Somewhat oily in the texture. ABV felt as projected, somewhat low and quaint.
Overall, what does UPS say "if it fits, it ships." Damn right it does, good job New Belgium for shipping a "quality" session IPA to the East Coast.

Taste is a very light, easy drinking 2 row and pale malt experience, replete with ample hopping of an ipa, but in a sessionable malt and alcohol setting.

Great format, great price. Because it isn't rare and is widely available, it's rating isn't as high as if it was hard to get or far more expensive format. Plus you don't need to chicago pour it, so beers that you can drink 12oz after 12oz of also seem to suffer rating wise here. Dry, reasonable bitterness.

This is a low first/high second tier session ipa.

This is one of the best-balanced IPAs I have tasted in a long time. It has a nice hop finish without excessive bitterness, and the balance of flavors is very nicely executed.

The look is perfect, the smell is very appealing, and the taste is better than any I can think of except perhaps the Lagunitas IPA and the Ballantine IPA from New Jersey (circa 1965).

Guppy314 from District of Columbia

From a bottle, pours a slightly hazy yellow with an off-white head. Aroma is hops and grapefruit. Taste is fruity hops-forward with a bitter grapefruit that has a grassy flavor. Mouth feel is mixed bag with distinct intence flavors, but that vanish almost immediately.

Clear gold with one plump finger of white ten minute head. Rings of lace.
Smell is dank hops with a light touch of malt.
Taste is mild hop bitterness with a touch of malt sweetness.
Mouthfeel is light with good carbonation. Finish is lightly dry and modestly bitter.
Overall an alright session IPA. I noticed mine was about a month past the best by date. So I will seek out a fresher example and do some editing if warranted.

Grapefruit flavor with just enough IPA/hoppy taste to leave you wanting more. A drinkable, light beer worth a try. Some IPA's come out strong with the hoppy/flowery taste, Slow Ride is a slow steady experience.

Taste Rating in Words: You're car's a light grapefruit/IPA automobile and you're on a long relaxing Sunday drive, a drive that fades into a smooth sun set.

Tastes great. The lesser amount of alcohol takes nothing away from the taste. Lightly hoppy, somewhat of grass, with a fruity, tropical, apricot aftertaste.

Overall, pretty descent. Would recommend where and when better micros are not available.

Good stuff. It is a lighter IPA. That to me means that the mouthfeel is a bit watery, the ABV is lower, and probably lower calories too.

It has that grapefruit taste with minimal bitters. Its a pleasant beer to drink. I'd drink this when I'm in a social situation. Some beers are just so darn strong that by the time you finish two of them you can feel your IQ dropping and your ability to communicate is nil. This is a good social beer. I'd try it again.

Appearance: two-finger thick head of rocky white over a clear deep golden/amber body. There are some small solids visible in suspension; and not too many bubbles are rising (?). Very good head retention and even better lacing.

Flavor: Hop driven, following the aroma, over a mild, cracker and biscuit-like malt base. Solidly bitter given the body and malt content (only 4.5% ABV), and well-balanced - the hops are not as full blown as they appear in the aroma but there's not really enough malt to support them if they were.

Mouthfeel: Light-medium in body and smooth with a moderate carbonation level.

Overall: Decent enough session IPA. The bright aroma is nice, and it's just 4.5% ABV (otherwise I might just go for a standard pale ale, although to be honest the half-percent doesn't really make that much difference).

It's a session. Compared to a "normal" ipa, it's watery with no complexity. Compared to other sessions, it's acceptable and what you would expect. Not my favorite Session, but it's ok. Clear wheat color with some carbonation and white, tight bubble had. Some citrus on the smell, but taste was all pine hops. No malt taste or any sweetness.

Knowing Session is code for Lite... it is what it is.

I was really disappointed in this one, I'm a huge fan of New Belgium but this IPA really leaves something to be desired. You get hints of pine and citrus however this beer was just too light for my liking and really didn't compare well with other IPA's like Dogfish 60 minute or Oskar Blues IPA. Overall decent beer but just not the best IPA.

APPEARANCE: Crystal clear, light amber/orange. Some small bubbles rising. About a finger of off white head that dissipates fairly quickly leaving a ring on top of the beer. Fair lacing down the glass.
AROMA: Pretty fair amount of pine and citrus peel. Mild bready malt.
TASTE: Nose much stronger than the flavor, but basically the same pine and citrus notes.
FEEL: Watery. Thin body, average carbonation and dry through the whole sip.
OVERALL: Very thin, mild in flavor. So, probably pretty sessionable.

A: Rich golden amber color with persistent fonts and sticky looking dirty white foam of heterogeneous bubble size.
S: Pine, mango, pineapple rind, toasted malt.
T: Mild, overall flavor. Some of the fruity notes present on the tongue. Bitter hit with slight bitter finish that layers on sip after sip.
M: Watery, little carbonation, soft bite.
O: No facet is too much to be over powering, with balanced tropical hop notes and malt that leave you unsure what you just tasted and keep you coming back. Might be a nice IPA to pair with more delicate flavors.

Poured from a brown 12 oz. bottle. Has a dark golden color with a 1/2 inch head. Smell is of light citrus, some floral notes. Taste is citrus, lemon peel, very light bitterness. Feels light in the mouth and overall is a refreshing but kind of bland beer. I'm not a big fan of these session IPA's.

This is a really nice example of the style. Both the hop aroma and flavor are big and present. All the hop flavor without out the bitterness, love it.

I didn't actually have any intentions know reviewing or drinking tonight but I have a few brews sitting in my fridge that are near their freshness dates. Most of them were just random mix a six additions to round out a pack so I don't have much in the way of high expectations. Anyway, let's drink it.

Look - From the twelve ounce bottle hard poured into a dimpled pint glass. This brew pours a moderately hazy golden with a finger and a half of white head that sticks around for a minute or so until it begins its descent. Leaves immediate soapy stick amongst the top of the glass and the head settles down to a rather thick cap amongst the top of the swill. Carbonation appears to be quite low. Good bits of lacing and stick retain after a finished glass.

Smell - When think session IPA,this is the kind of smell I always like to get. Floral, mosaic in nature to be quite honest with just a touch of malt to balance it. Not a big nose but nothing that would lead you to believe this brew may become too sweet as a lot of session IPA beers tend to do.

Taste - Follows the nose. Lots of floral aspects with a touch of pine and a well done malt for balance. Nothing fruit going on, which is fine by me in a session beer. Buttery notes come through as well as the beer warms up a bit. Reminds me a lot of Founders Mosaic Promise.

Feel - The best part of the beer in my opinion. Slick juicy moderate mouth feel with a touch of carbonation. Flavors all remain in tact and it does become a bit sweeter but definitely not cloyingly so. Swallows with a light bitterness. Exceptionally clean and not drying.

Overall - A rather short review but there simply wasn't a lot to write about. If you like the floral mosaic hops, then you'll like thks beer. Considering the ABV, and the fact this is a session IPA, it does a damn good job and keeps the typical unbalanced sweetness at bay. Won't blow your mind, but worth checking out. As always, try it and come to your own conclusions.

Poured from the tap into a pint glass. The appearance is a clear gold color with a small white head. The aroma is citrus driven. The taste is mostly citrus with some hops. Overall, an excellent beer.

I purchased this bottle at Wegmans enjoyed chilled in a stange-type glass.

the color is a pale golden with thick white head and fine bead with visible carbonation and great retention. The smell has a grapefruit/citrus rind smell with a subtle piney hop scent and light floral aroma with fruiity odor perhaps yeast ester with herbal aroma as it warms with all hops in the nose-nice!. The feel is moderately high in carbonation with a mild bitterness with slight sweetness and light toasted grain texture with increasing bitterness in the semi-dry finish.

The taste is very good with very tangy citrus and slight spice of hops up front with light malt mid palate and slight herbal/grass-like hop flavor with low astringency on the palate with mild grapefruit in the taste lingering with a mostly dry finish. Overall a very good session pale -one of the best I have had

355ml can poured into tulip.

Pours a hazy yellow-gold with three fat fingers of puffy, off-white head that leaves airy chainlink lace as it recedes.

The look of this session IPA is a amber color with the smell of tropical fruits coming from this beer. The taste is outstanding, and this is a session IPA that I will drink again.