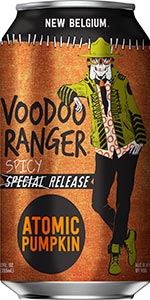 Notes: Enough with the run-of-the-mill pumpkin beers. I’m not interested in an ale that takes cues from a frozen coffee drink, and neither are you. That’s why I made Atomic Pumpkin. Does it really feature habanero peppers? Yep! What about Saigon cinnamon? Ding! Aji and del arbol peppers? Winner. I round it all out with a hearty malt bill that makes for a spicy brew that puts the “Fun” back in pumpkin. (Spelling was never my strength). -- Voodoo Ranger

12oz bottle poured into glass.
Look: copper with no head.
Smell: cinnamon, hot peppers, nutmeg, and pumpkin.
Taste: cinnamon, nutmeg at first, then peppers and pumpkin. The pumpkin is subdued. It tastes like someone dumped cinnamon into the beer. The peppers add heat.
Feel: medium bodied. Burns due to the peppers.
Overall: As a person who loves spicy food this beer is good. I have been trying beers with hot peppers. This has too much cinnamon and not enough pumpkin.

Simply one word - wow. This could be the best pumpkin ale I've had to date...

Great reddish-orange coloration with weak head and an exceptional sweet smell of pumpkin. The pumpkin smell blends well with the habanero and the "heat" from the spice is much greater than I expected, though still welcomed. I would mention, if you're not into spicy food then this beer is not for you. Mouthfeel was light and aiding in the overall drinkability of the beer. The tastes of pumpkins, sweet mind you, and the peppers blended so well, I wish I had another one to partake.

Bought a 6-pack $7.99 Foodland
Smell of cinnamon
Clear golden color with a slight orange tinge
Medium carbonation
Medium-light mouthfeel
Taste of cinnamon, heat from the habanero seems to dominate, malt flavor
Overall an interesting beer to try, but not something I would drink very often. Having a beer with spicy food is great, but since this beer is what's spicy you need to drink a different beer after it to refresh your palate.

Smell: Oh gracious, so much cinnamon. Also gingerbread and even vanilla icing.

Mouth: It's most interesting aspect. Light and smooth, then peppery heat.

This one grew on me, bloomed its peppery flavor as it warmed. Still remarkably light, but a unique pumpkin ale indeed!

From a twelve ounce bottle, this brew is a golden in color with just a slight haze and modest head. The aroma is seriously cinnamon. It reminds me of heavily cinnamon'd apples, with brown sugar. The taste has a spice heat due to the peppers and cinnamon. Lots of flavor and intensity. Medium in body. Interesting, engaging, and flavorful.

I am giving this a good rating in spite of the fact it was too spicy for my liking. My lips and gut are burning. I didn't realize the pepper thing until after I poured it. At first I thought it was from the alcohol level until I re read the label that described the cinnamon and habanero peppers. I think that folks who enjoy spicy peppers will really like this beer. As for me this is one and done. Glad I purchased a single.

Atomic Pumpkin has a thin, off-white head, a clear, bubbly, gold-orange appearance, and sheet lacing. Aroma is of pumpkin pie, cinnamon, and pale malt. Taste is of of those elements, with a background pepper heat (very background). Mouthfeel is low medium, and Atomic Pumpkin finishes right between sweet & dry.

Smells like a cinnamon bun or homemade apple butter. Not my usual preference, but I wanted to try it because it was fresh and also contained habaneros. I love a little heat in a beer.

Taste is similar to the smell. If it was a blind tasting, I honestly wouldn't pick out the pumpkin, nor the alcohol. It's actually surprisingly tasty. The heat is very subdued, and in order to really feel it, you have to take a few drinks in a short period. I had my wife taste it, who normally hates my IPA's or anything spicy, and she liked it, too.

Feel is surprisingly light for anything spiced. I expect them to be heavy and creamy, but this was not. Love the subtle heat from the peppers. I had my wife taste it, who normally hates my IPA's, and she liked it.

A classic pour into a Spiegelau tulip generated a two finger, off-white head atop the orange-yellow.
Cinnamon aroma dominates with maybe some faint vegetable - green pepper or pumpkin.
Some pumpkin but really just a spicy finish but lacks sweetness to tie things together
Medium bodied but with a off-putting mucous thickening effect.
A chili beer attempting to be an edgy pumpkin ale was not successful. Not terribly interesting. Fine as part of a pick-a-six or a sample size.

I used to pass this seasonal gem up. The 1st two years of its release. Once I tried it. I was blown away by the smooth marriage between the habenero and cinnamon. Not really into the mouthfeel foamy head descriptions. This is a damn good beer. The amazing thing is the ABV achieved without sacrificing the flavor. New Belgium is my favorite craft beer Company & they dont disappoint on this offering.

Taste - Strong cinammon, pumpkin and hop, in that order. Cardboard aftertaste seems to build up over time. 4

Mouthfeel - Certainly lives up to its name. Very spicy pepper and cinnamon gives you an immediate, powerful kick to the back of the throat. 4

Overall - Keep in mind I'm rating in style. Enjoyable as a one-off gimmick, but definitely not a session beer, but again that's pumpkin ales for you.Maybe good to have around for Halloween. Absolutely devastating to the palate -- save for the final beer in a tasting session. 3.75

Look: looks like a medium-dark IPA or light colored amber with bright white head.
smell: sweet and cinnamon dominates, not unpleasant but I was hoping for more of an earthy hop aroma with faint cinnamon.
taste: like the aroma malty sweet an cinnamon, spiciness from habanero fades fast and is non-existent after beer warms up.
feel: medium body, decent carbonation.
overall: I was hoping for more of an American Amber with spices, but this beer is like a winter warmer but without enough bitterness to back it up, a little to sweet for my preference. It drinks fine when chilled but is too sweet after it warms up.

A pleasing aroma, slightly sweet, some smooth cinnamon and other spices.

Initially sweet, some apple, and the spice. Then the habernero comes hammering in, leaving a very nice burn in the back of the throat.

Overall, a pepperhead like me enjoyed this one, initially sweet, then the burn washing out the pumpkin taste. Others who don't care for hot peppers in their beer might want to give this one a miss.

Pumpkick with Cinnamon and Habanero. Not bad.

you have to like intensely flavored beer to appreciate this one i think, but its a pumpkin ale, most of them are over flavored, so if you are already drinking this, the intensity of the flavors shouldnt bother you much. this is a really neat combination of flavors for one of these, decidedly different, and even though its turned way up, i really like it. its cinnamon and habanero pepper, and both of them are quite bold here, not a spicy cinnamon, an autumnal, warming one, and its there from first sniff to last drop. its awesome with the malts here, not sure there is pumpkin actually in the beer, but with some brown sugar and baked character to the grain, it almost works like there is. the pepper is natural and citrusy, honest and fleshy, with most of the heat in the throat on the swallow, oddly delicious with the cinnamon, and not lingering too long or too hot, its new again on each sip, which i appreciate. behind these flavors are notes of graham cracker, almond and chestnut, and even a whiskey note. the cinnamon is dominant, but its really good, some will hate this, but i like it. finally one without all the usual spices, im sure ill drink more of these this fall. a little gimmicky i guess, but no denying that it tastes good! cant wait for fall!