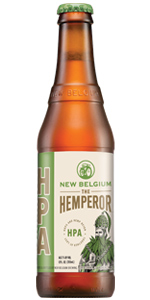 Notes: Get ready: an exciting new offering that’ll change the way you think about hoppy beers is coming your way. The brewers at New Belgium have created a new style of IPA: The Hemperor HPA. With the popularity of hoppy beers, our brewers are always on the lookout for different hop varieties and the complexities and flavors new strains can bring. That’s where hemp comes into the picture. Without getting too nerdy, we found a unique way to recreate hemp terpene flavors in a beer, which complement the inclusion of hop flavors and hemp hearts (seeds) in a brand new, delicious way—not to mention this beer is extremely dank! The flavors and aromas are so unique that it’s a style unto itself, hence HPA.
View: More Beers | Place Reviews
Recent ratings and reviews. | Log in to view more ratings + sorting options.

3.41/5  rDev -7.6%
look: 3.5 | smell: 3 | taste: 3.5 | feel: 3.75 | overall: 3.5
12oz bottle into a tasting glass.
L: Cloudy lite amber.
S: A big fat roach of cartel weed with black seeds. Funky. It stinks up a small room.
T: Caramel, dank hops, pine and B grade pot. Drinkable earthy and funky. Good. Hemp taste is there, probably hoppy, sweet, smooth, oily. Hemp seed oil. Hops lie on the tongue like an alligator in the sun. Long resinous grassy hemp taste. It is sweet and a bit cloying.
F: Med-heavy mouthfeel with a moderately dry finish.
O: Very full flavored IPA. Extra heavy on the hemp for sure. It's was good in it's style.

4.06/5  rDev +10%
look: 3.75 | smell: 4.5 | taste: 4 | feel: 3.5 | overall: 4
Pours a super cloudy amber/gold with little to no head. Smells of pine, earth, some floral notes & of course... dank like some green. Taste certainly follows the nose, the hop bite & malts are pretty much perfectly balanced. Medium-bodied with a crisp finish to it. This beer is interesting to say at the least, straight up smells like you opened up your weed jar when you crack one of these open. It is nonetheless refreshing, I will be buying more of these in the future.
Sep 27, 2020
Rated: 4.81 by Heutzenroeder from Colorado

Reviewed by Ernald_Elbertson from Delaware

Look: Probably the weakest aspect, as it doesn't look particularly appetizing. Kind of a muddy light brown, translucent, with off-white head. Lacing is present, but many, it just doesn't look like an IPA should. On the other hand, I'm sure this is sort of a sacrifice to make the smell and taste of the beer the way it is, so no hard feelings towards it.

Smell: There isn't anything to say other than "it smells like weed." It smells like someone just opened up their grinder! I was actually very surprised at how forward the smell is, and had expected it to be somewhat vague. But if you know and love the smell of weed, this will trigger that happy chemical in your brain.

Taste: Fortunately, it doesn't actually taste like cannabis too much. This was something else I was skeptical of; weed doesn't taste good, so why make a beer that tastes like it? Well simply put, it doesn't. It's mostly malt and hops (though a bit too malt forward for an IPA in my opinion), with a slight aftertaste of bud. Kinda like eating a really well made edible where the cannabis taste is just barely present at the end.

Feel: Kinda thick and syrupy, which isn't really desirable for the style, but again, I'd guess this has to do with the process of making the beer smell so much like weed.

Overall: A really unique beer that I think helps to demonstrate all the different things beer can be. I'm not sure if I'd buy it very often for myself, but it's a beer I'd love to drink with a group of friends and show them how cool it is.

Rated by hozersr from Pennsylvania

Reviewed by Singlefinpin from North Carolina

4.1/5  rDev +11.1%
look: 4 | smell: 4 | taste: 4.25 | feel: 4 | overall: 4
Poured from a bottle into a pint glass.
Appears orangish, with a nice foamy white head that lasted.
It's 4/19/2020 so a little hemp warm-up for tomorrow.
Smells initially dank, grassy, floral
Taste a little dank, hemp not at all overpowering, hoppy bitterness that I like.
Mouth feel is medium for an IPA.
Overall pretty tasty and I would definitely order again.

Reviewed by gestyr from Pennsylvania

Reviewed by ZagZagg from New Jersey

A: Moderate pour yields a frothy single finger head with mild retention and some visible collaring. The beer has a honey-like hue that has opacity, leading me to believe this is not filtered. Carbonation is not apparent.

S: Somewhat dry and resinous, heavy terpene and herbal notes, subtle citrus, floral, bit of a cannabis aroma, light touches of a simple sugar sweetness. There’s also the presence of an iced tea fragrance. The dominating elements of the nose vanish shortly after the initial pour.

T: Hop forward, but without the piquant zest found in your traditional APA/IPA offerings. Mellow touches of dry wood, earth light coriander and lemony elements fade in and out about the middle mouth. Anonymous malt backbone is bready, although without much to balance. Finish is dry, and shy of refreshing. Not too much depth, somewhat one dimensional.

M: Crisp, light carbonation plays on the tongue, medium bodied with a certain dryness. After taste is dry and hangs around.

O: Eh, I appreciate the innovative style and exploratory brewing, but I think this brew lacks the complexity I’m looking for in the genre. It’s a decent beer, but nothing to write home about. It has an okay drinkability, which is a plus. I think if they could capture more of the terpene essence that presented in the initial nose and infuse it into the taste profile it would be much more interesting.

Rated by JohnDon from Texas

Beer poured golden orange with a beautiful white head that is leaving lacing behind.

Nose initially came across as skunky upon removing the bottle cap. After breathing a minute, hop profile is very minimal, a touch of grapefruit but not much else.

Taste is really well balanced where the malt base and the grapefruit and hemp combine very well but flavor wise is lacking compared to others in this class. Finishes with a light touch of grapefruit bitterness; 5/10 on my scale.

Mouthfeel is medium bodied and fairly refreshing yet smooth.

Overall i will need to re-review in the future as this bottle seems a bit old.

Rated by rickyfinn from Minnesota

Reviewed by CDBeerDisappear from Ohio

4.27/5  rDev +15.7%
look: 4 | smell: 4.5 | taste: 4.25 | feel: 4 | overall: 4.25
Look: Clear copper with a modest head. Visible tiny slow rising bubbles. Head quickly dissipates to a foam cap that lasts
Smell: It smells like a bag of weed! If you are looking for a dank beer, they NAILED it with this one!
Taste: Biter from front to back of the palate.
Flavor: Flavor follows the aroma. It tastes like you are drinking marijuana infused beer. This is exactly the target they were aiming at and they hit it dead center!
Feel: Medium mouthfeel, soft carbonation finish is dry and dank.
Overall: They claim to have invented their own new category HPA - Hemp Pale Ale. I have had and enjoyed a lot of beers that claimed to be “dank” euphemistically saying that there was a marijuana-like smell/flavor, but When you open a bottle of this beer it smells just like you open your bag of weed. I’m not saying that makes it better than other beers (though I am giving it a 5 for aroma because they hit their target perfectly) but if you are looking for a “dank” beer you won’t find one better.

Reviewed by Miguy from Michigan

4.35/5  rDev +17.9%
look: 4.25 | smell: 4.25 | taste: 4.5 | feel: 4.25 | overall: 4.25
Wow this is something new to me and extremely enjoyable. Very well balanced and drinkable. I feel like the execution of this beer is exactly what I would conceptualize and never be able to pull off. Clean, innovative and Crystal clear about the intention. This kind of beer does not happen by accident. These people are clearly talented individuals! New favorite!
Nov 28, 2019

Reviewed by jmbranum from Oklahoma

Crystal clear, subtle aroma. Flavor is... to be honest I've had more interesting, more dank beers, even some that only had cannabis-like terpenes without any hemp. This beer isn't bad but it is kinda underwhelming.

But... I appreciate the effort and hope more brewers experiment with hemp.

Rated by Malacant from Louisiana