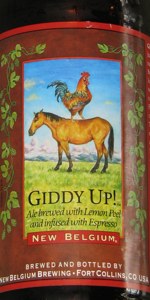 This is my new favorite beer. Coffee + Delicious Beer = Heaven!

It taste amazing. I'm never reviewed a beer before but tasting it made me login so I can give this beer 5 stars.

I don't know why the review has to be 250 characters. This is too long. Go buy this beer!

Had this at New Belgium. One of their four samples. The servers said it would be available for general purchase soon enough.

Now onto the beer. It was darker than Fat Tire (a little more amber). Had a slight espresso smell (of course) but nothing over powering. Still just a slight coffee taste and very drinkable. I really liked that the coffee didn't overwhelm the beer. It was more about a nice beer with a hint of coffee instead of the other way around.

Too bad that New Belgium doesn't distribute past Tennessee, but I look forward to that day.

brownish with a red hue, little to no head to speak of.

smells of rish malts and a hint of hops. a nice coffee undertone is present can't really smell any lemon peel that should be present.

taste is smooth and rich of malts and a grainy taste. with a finish that will make any coffee lover happy. a hint of citrus in the background. I have to say this is one of the best coffee beers I've ever had. I've never seen c coffee beer that wasn't a stout.

mouth is medium and slightly oily but has a smooth finish and has superior drinkability. I wish I could get this in six packs and not only once in a blue moon on tap.

Got this one as part of a combo 12 pack. I was surprised to find a brewer tossing espresso into an amber and wanted to try it - not suprisingly it didn't work. Pours a darker amber color but very translucent. The espresso is noticable but ends up being too much for such a light body. The ensuing lemon peel flavor doesn't help either as the contrast between the two aforementioned flavors is hardly tasty. A friend trying it on a blind taste test said it reminded him of soy sauce - no joke. A very confusing amber that I cannot recommend.

A - Pours a clear chestnut brown with hardly any foam, just a ring of small bubbles around the glass

M/D - medium bodied and easy drinking, a very nice version of a coffee beer. I don't know if I'd want to drink it one after the other, but definitely worth a try.

Pours a dark amber color, nearly brown, a huge 3 finger tan head, falls slowly, good lacing. Aroma is a nice mix of chocolate, coffee, and bright hops. Still has that same New Belgium yeast aroma that I get in every one of their beers. Taste has very nice coffee flavor, but it's not overly pronounced. The coffee blends nicely with the biscuity, nutty malts and earthy hops. I'm not picking up too much of the lemon. As with the nose, the flavor is typical New Belgium, as most of their beers seem to have a Fat Tire base, and then they work around that. Not sure if it's the malts or the yeast, but many of beers have the same qualities, but that's not a complaint. Just nothing new or exciting. It's slightly sweet and well balanced. Mouthfeel is medium and slightly creamy with the low carbonation. I liked this beer, but couldn't see myself trying to get it in six packs. It was good enough as a treat in the Folly Pack.

T: What I get most is in the finish, and that's lemon. Very citrus finish that takes over a lot of the flavor of the beer. Some caramel malts up front with hints of toffee and no hop flavors that I can detect. Don't really pick up the espresso flavors, citrus/lemon flavors are quite present.

D: I don't understand the lemon addition to this beer. Would have loved the espresso to pop through, and without the lemon. I love the caramel/toffee flavors but the citrus finish just makes for a weird experience. However, it is an easy to drink beer.

Had this one on tap at the Skylark Lounge in Denver. Pours a medium amber color, with a little bit of head. Aromas of biscuit malt, some caramel and a whole lot of freshly ground and brewed espresso. This is a really nicely balanced beer, with a good caramel malt background, contrasted nicely by a huge hit of espresso. I have no idea what happened to this beer, but I kind of miss it.

Appears a deep amber with minimal head and nice clarity. Nose features mild espresso qualities along with some grainy malts, and some bright lemon zest notes. Taste has light fruity notes with some roasty notes. Espresso is present but mild. Lemon zest makes an appearance as well and makes for a mild flavor profile overall. Mouthfeel is light and mildly carbonated. Overall, some good things going on but everything is unfortunately bland.

D: Pretty sure I could drink a lot of this. I tire of coffee, but this in this beer the flavor is not over-done.

The beer is a beautiful dark color. That is all I can say I liked about it.

Aroma gave some clues as to what was to come - but didn't quite give a complete picture.

The first drop that hit the tongue wasn't bad... but then the full flavor hit, and I actually convulsed at how bad it was. I have no idea where they were trying to go with the combination of flavors, but they ended up in a suburb of hell as far as I'm concerned.

Poured the rest down the drain. Only the 2nd beer I've ever done that to.

Nice mellow nose with light hints of coffee (duh) and maybe a little vanilla. The color is a warm ever so lightly milky amber. Taste is fantastic. Coffee seems to typically be used in porters and stouts and makes for a really rich and warming beer (like Speedway Stout!). This on the other hand has a great balanced body. The espresso taste is prominent but it somehow makes this beer extremely drinkable. It felt like chocolate/coffee milk but far less oily or chewy than normal coffee applications. Definitely more of an early fall session beer. I'm getting some bottles soon and am interested to see how they fare but on tap this one is fantastic!

Had this on tap at the Ginger Man in Dallas.

I like the color, very dark/coffee amber. Decent head and lacing.

Smell of coffee/espesso, interesting malts, and hit of citrus. I like the strength of the coffee smell.

Taste wasn't as strong as the smell leads you to think it will be. That's a strong point, I think. Espresso comes through, but tempered with some vanilla/caramel hint. Just a pinch of hop there too, but doesn't hurt, just compliments.

Mouthfeel was just as it should be for this ale, smooth and easy. Medium bodied.

This is a very drinkable ale. I like the idea of a espresso ale for breakfast.

Most of the New Belgium offerings hit their mark, and this one does, dead on. I will definitely snag a case for the favorite ale 'fridge, when I can find it.

A: Dark copper-gold. Came to the table with little (off-white) head.
S: Smells of cream and coffee. For anyone who has been to Cold Stone Creamery, it smells like their Coffee Lovers special.
T: Tastes similar to the smell, with some toffee too. Not terribly complex but a good break from the other beers infused with coffee beans that I've had.
M: Light, carbonated.
D: Probably the best coffee-infused beer that I've had. Less complex--and thus easy to drink--but I prefer it over others that I find a bit overpowering.

Appearance - Pours a mud brown color that turns ruby red when held to light. The head is a sandstone color, one finger width and has fair retention, resulting in a broken layer of suds across the surface. The lacing is small and spotty, with fair stick.

Smell - Strong coffee aroma supported with light notes of chocolate, caramel and a hint of lemon.

Taste - No surprises here. Deep coffee character makes up the bulk of the flavor profile, while moderate notes of chocolate and caramel round out the front end. Traces of lemon zest can be found on the tongue in the aftertaste.

Mouthfeel - Light in body with fair carbonation. Not much to it, but it's easy to drink.

Overall - A nice coffee infused ale from New Belgium. If they brought this back permanently, I'd probably buy it a few times a year. As is, I'm glad I got to try it as their featured 'Revival' brew.

Got this in a pack of New Belgiums. Their newest folly! Hah!

A: Pours reddish brown. I had a hard time squeezing a lot of head out of it and it dissipated fast with almost no lacing on the glass.

S: Smells like a coffee shop. I guess that's sort of the point. I am not generally into this sort of thing, but damn, this smells good!

T: The espresso is at the core of this thing. In fact, it's completely overbearing despite the slight lemon and vanilla trying to balance it out. There's not a lot of complexity here, though, there's almost no bite to it, and honestly, it tastes sort of watery, like drinking watered down coffee with a lemon wedge in it. This one is just not doin' it for me. I prefer that my beer tastes like beer.

M: Thin, with a little carbonation that makes up for it. Not impressed.

D: Well, I could definitely pound these without really thinking about it, but I've come to expect more than that from New Belgium brews. Still, it's drinkable as a session beer, but I'd honestly rather just get Pabst or something cheap like that. As far as red ales go, this is nowhere close to something like, say, Cinder Cone, which is miles above this in terms of quality.

I'm pretty disappointed in this one. Maybe I got a bad bottle or something (if the next one is better, I'll be sure to edit this review to reflect that).

Giddy Up! from New Belgium Brewing Company
Beer rating: 82 out of 100 with 271 ratings