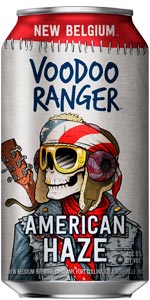 Notes: Dry-hopped with Strata, Amarillo, and HBC 522. With notes of passionfruit and freedom, American Haze is a supremely drinkable, juicy and unfiltered IPA brewed with all-American hops.

I've liked voodoo ranger for a while, but this beer made me create this account to tell everyone here to avoid this one.
It really isn't good, and I wish they wouldn't sport "American" IPA on it... because what a way to deter other people from American IPAs.

Looks beautiful, like all New Belgium beers. Very light scent, especially for an IPA... light grain and booze and not much else. The taste unfortunately follows the scent... very clean with lemon, grass, wheat... not much else. Very very light... barely an IPA...

I like a light hoppy beer but I'm not sure who this was made for...

3.83/5  rDev +3%
look: 4.5 | smell: 4 | taste: 3.75 | feel: 3.5 | overall: 3.75
Not everything is a NE IPA just because it doses a little tropical fruit and medicinal hops. This does have the visage down, looks great in a pint glass to be sure. The flavor is pleasing but a bit watered down and shrank a bit from the mature taste. Certainly crushable, and perfect with the usual caveat that it really works best outside in warm weather in large quantities and nothing important to do. Just fine for what it is: not meant to be consumed as a single.
Jan 02, 2022
Rated: 4.09 by TeachChefs from Pennsylvania

Reviewed by Torchiest from Texas

Light fruitiness and hops, but not much going on in the nose.

Smooth and inoffensive on mouthfeel, not heavily carbonated.

Overall this is decent, but nothing to write home about. I wouldn't go out of my way to get it, but I wouldn't turn it down at a party.

Look - Bit darker than you may expect. Quarter finger of head. Decent stick.

Feel - Quite smooth and goes down easy. Rind. Banana coats the mouth and lingers.

Overall - Not sure about a NEIPA but it was a solid brew nontheless and a welcome addition to the variety pack. Give it a try.

3.51/5  rDev -5.6%
look: 4 | smell: 3 | taste: 3.5 | feel: 4 | overall: 3.75
Pretty good. The look is pretty typical for any hazy, if a little bit darker. Not much head, but it does persist for a while. Smell isn’t much to brag about either. It smells pretty heavy on the malt side, not very hoppy or piney, but I get a little bit of fruity aroma, can’t put my finger on what it is, but it’s fruit. The taste is decent. Not the best for a hazy but not the worst either. About what I expect from this lineup, not that it’s bad, but I feel like aside from the Juicy Haze and V2K, most of the VR series is pretty lackluster. Again, by no means bad. It tastes of some light citrusy fruits, orange and grapefruit, but it doesn’t overpower. It does leave room for improvement on the complexity of the flavors though for sure. Not very piney or malty or hoppy, it’s kind of just a fruity beer. Almost hard to tell it’s beer because it lacks any sort of signature beer taste. Not a bad beer for a session, but not one I would pick up just to have one again. I like the VR lineup because it’s a great alternative to cheap party beer, and won’t break the bank, and most people can stomach them.
Sep 09, 2021
Rated: 4 by jkermitj from Mississippi

3.93/5  rDev +5.6%
look: 4.5 | smell: 4 | taste: 3.75 | feel: 4 | overall: 4
Beautiful hazy gold with a big rocky head. Smell is mild hop bitterness- pine and citrus. Taste is a sort of soft hop bitterness, balanced pretty well by the malt. Some nice hop flavors but their subdued- pineapple. Mellow. Like the standard IPA version the beer is really nicely balanced. But for an NEIPA this is on the weak side at 5% and it shows. Feel is light for the style, which isn't necessarily bad- it's very drinkable. This falls into a category of sessionable ~5% "IPA's" that are the kind of beers you'd like to see become really mainstream. A lot of times I don't think they work but this is pretty solid.
Aug 07, 2021
Rated: 3.75 by a77cj7 from South Dakota

Rated by GStone899 from Minnesota

Smell: It has tropical fruit aromas with grass and resinous elements. It has a melon element as well.

Taste: It has a passionfruit flavor with a bit of grainy sweetness. There are some orange and citrus notes.

Feel: It has a medium body with a mostly sweet finish.

Overall, there are some good tropical flavors with a sweet finish.

Reviewed by davidward from Florida

Reviewed by mschenk from Virginia

Smell - Can small hops as well as earth notes

Reviewed by NeilSilber1 from California