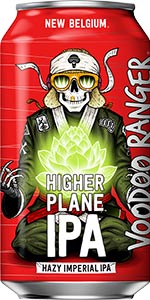 Flavor:
Slight-moderate sweetness through the middle, then a slight-moderate bitterness that grows to moderate and lingers slightly.; Mouthfeel/Body: Smooth and slightly coating. Medium Body.

Love the smell and taste of the froth. Slightly banana flavored. Green juicy hops with some tropical flavors. Medium bodied with no bitterness. Well rounded.

12oz can. Poured out a cloudy, golden orange color with a small, off-white head of foam. It left some sticky rings of lace. It smelled of grapefruit, pineapple, orange and toasted caramel. Sweet tropical fruit with piney bitterness and toasted caramel backbone.

Bought the last 6-pack of this for $9.99, which is a dollar more than I paid for Atomic Pumpkin earlier this week. It's hazy with whitish foam, smells pretty good - citrusy. Definitely tasty. The first few sips had some bitterness in the background but as I had more of it that seemed to go away. I'm happy about that although the bitterness wasn't harsh. Overall I'm liking it better the more of it I have.

S - Mango and pineapple abound in the nose.

T - Malt base presence is slightly sweet with mango and pineapple over the top. On the back end there is a slight bit of resinous spicy fruit but is very subdued. Finishes balanced with a slight bit of alcohol poking through.

M - Big medium body with pronounced dryness on the back of the tongue.

O - This one sits in the middle of the pack. An easy sipper that packs a punch.

Poured from a can into a pint glass

Appearance – The beer pours a moderately hazed orange-yellow color with a two finger height head of just off-white foam. The head has a good level of retention, slowly fading over time to leave a ton of foamy lace on the sides of the glass.

Smell – The aroma of the brew is rather strong of a tangerine citrus and tropical fruit (papaya and mango) smell mixed with a decent showing of some hop. The hop is mainly of a dank nature with aromas of herb and pine, with some lighter notes of grapefruit and earth. There is a little bit of a bready smell as well as a decent showing of a hay smell.

Taste – The taste begins with a crisp cracker malt flavor mixed with a light showing of some tangerine and light tropical fruits of papaya and pineapple. At the start there is a moderately strong grapefruit hop flavor. Upfront the hop is nearly entirely of a grapefruit taste, but as the taste advances the grapefruit fades and is replaced by other hop flavors. Herbal hop and earthy flavors become the more dominant hop as the taste moves toward the end, with just a touch of pine joining in as well. The sweeter fruit that was present upfront also fades as the taste advances further and with a touch of alcohol booziness as well as the changes in the hop tastes, one is left with a slightly dank and crisp taste to linger on the tongue.

Mouthfeel – The body of the brew is medium in thickness and creaminess with a carbonation level that is rather average overall. A slightly higher carbonation level may have been better for the mix of fruit, dank hop, and cracker malt tastes, but all in all the feel was pretty nice.

Overall – A rather nice and robust tasting NEIPA. Crisp and flavorful with a nice refreshing but bold and big taste.

Hey, this IPA is a solid canned gem...got some dank that lasts but remains crushable!

The CANQuest (tm) may not be humble, but there is something disgruntling about noting that you are the one who simply added the beer to this site. Did you take the time to take, resize & submit the approved pic? Did you do the simplest research & add some Notes? If the answer to any/all of these is "No", then so what? Your CANtribution was minimal, at best & definitely NOT noteworthy! The CANQuest (tm) strives for CANpleteness & will rarely let you down.

I did some in-CAN agitation before Crack!ing open the vent on this one, just because I kinda felt hazy myself. I then went with a hard, aggro Glug into the awaiting glass since it seemed like the right thing to do. This all resulted in the formation of two-plus fingers of dense, foamy, rocky, bone-white head with very good retention. Color was a hazy, but not super-hazy, Golden-Amber (SRM = > 5, < 7). Nose was highly tropical, mainly pineapple with some mango. Mmm. Mouthfeel was medium, but on the thin side for the style. The taste was less (tropical) fruity & more bitter, with a cool pine mintiness acCANponied by a grapefruit bitterness and underlain by a light tropical fruitiness. Finish was semi-dry & refreshing, but I felt somehow unfulfilled. YMMV.