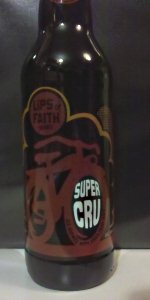 It pours a rich looking faded copper orange color. It's not a clear beer at all, unless it's just a chilled haze I'm seeing. Very cloudy. There is no head whatsoever. A few bubbles are up top, but it's hard to call this a head. Too bad too because it's a very rich looking pale ale style beer.

Something gives this an odd smell. It's not a bad smell, but it's very odd. It could be the pear juice, but I think it's the Belgian yeast. It's funky smelling. More than anything, with the high ABV and fruit juice, it smells like a cocktail.

Sometimes a lot of different ingredients, scents, flavors provide complexity. This doesn't. There's no cohesion. It's sweet, very tart, bitter, warming, but each of those feels tries to be the star instead of working together. Very similar to some krieks that I've almost had to pour down the drain.

A bit too funky for me. Nothing works, lots of rough edges. Not smooth. Rough around the edges.

Appearance: Pours a murky amber color with a splashy, but limited, head of foam; quite a few strands of lacing

Taste: Shortbread malt flavors dominate the front end, with the pear juice building into the middle; spicy yeast phenols dominate the finish; bringing a peppery and slightly herbal character; caramel joins the malt bill, in the finish, but there is also a surprising degree of tartness in the aftertaste

Overall: A couple of years in the bottle have tamed down this beer but I can't help but imagine that it would have been better had it started out with a lower opening gravity

Thanks, RuckusDu, for the opportunity

Appearance: A deep gold, if not light copper. Like tupelo honey. Somewhat translucent with a little sediment probably from the Saison yeast.

Smell: Very fruity, bready smell. Very reminiscent of its older cousin, Fat Tire. Has a subtle hint of the funk that comes from a lot of Belgian-style beers, but at the backend of the nose. The fruit and earthy qualities are the immediate and best reaction to the nose.

Taste: Decently balanced for how much is going on in the beer. It has a lot of characteristics indicative of a lot of styles. That’s its greatest weakness. I’m not certain the Amber backbone is paired extremely well with the pears and other fruit flavors. But it is certainly still a pleasure to drink. The spices and gingery tastes, common in many Belgian strongs, linger after the liquid has actually left your mouth for a long time. It’s a very strong finish. A little bit of the 10% abv comes out in the taste. But it’s a charming booziness, much like a favorite Uncle on Thanksgiving.

Mouthfeel: Very smooth. Very easy on newcomers to Belgian styles. Won’t be grossed out by too much flotsam. Has a lightness and crispness to it that will pair well with a summer day.

Overall: I really enjoyed this beer for what it was. Again, the balance is a little weird in the taste. Definitely an improvement on a pretty boring beer: Fat Tire. I wouldn’t go out of my way to look for it, but I would probably buy it again if it popped up and my pocketbook was feeling heavier than normal. I don’t think I’d really like to drink more than one at a time. So, grab a 22 oz. and share it with a friend.