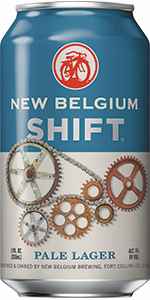 16oz can : tulip glass
from notes.

Light body overall, but medium for the style with prickly medium carbonation.

I have tried most of the more robust beers by New Belgium and I absolutely love them, but wanted some variety so I picked up this pale lager called Shift which has 5.0% ABV.

Look-Pours an almost perfectly clear and yellow golden color that are half a hue darker than the Nooner Pilsner by Sierra Nevada (see my reviews for a description of that one). It pours a thick white soapy head that settles down into a thin layer maybe half a finger thick.

Smell-The smell is very aromatic with lots of toasted bread and cracker malts, a tinge of spiciness from maybe black pepper and coriander, finishing with a floral citrus aroma. I was surprised at how much of the aromatics I got from this pale lager!

Taste-It has a nice flavor, but is not as strong as I would like, but then again I am a “hop head”. I do detect honey and bread based malts with clover, coriander, black pepper, and a muted citrus and floral component. The entire experience is a bit attenuated and passive, but if you are paying attention (and you should), then you’ll get these flavors clear as day.

Mouthfeel-The feel is crisp and mildly effervescent with a moist dry finish. The beer is medium-bodied and clean. The carbonation lingers on the tongue for a long time after your sip which is interesting, because the carbonation bubbles were scarce.

Overall-It is quite a nice experience if you consider everything at once. It is a malt-forward, crisp and refreshing session brew. Leave it to geniuses like New Belgium to take a categorically “wimpy” beer and make it this drinkable. They have renewed my hope in non-IPAs like this pale lager. Great job, New Belgium brewers!

A vigorous pour into my Gulden Draak tulip produces a three finger thick, just barely off-white colored head. The beer is a bright, gold color that shows a brilliantly clear, pale gold / yellow hue when held up to the light. The aroma smells of dried hay-like grain, sweet pale malt (with touches of honey-like grain), and a supporting, but increasingly noticeable tropical fruitiness that smells like a mix of orange-scented grapes, lychee, guava, pineapple and bright fruit blossoms. After a short bit a more herbal character starts to become noticeable; slight dank, not really pine, though not full blown marijuana character either.

Dry seeming, but somehow has a sweetness to it that is accentuated by the tropical & ripe citrus hop character. There is a nice pale malt middle to this beer that contributes more body than one might expect from something labeled a Pale Lager; a touch of malt viscosity is here, but ultimately this is a very quaffable beer. Cracker like malt notes are noticeable from beginning to end, but are on the soft side of things. There is also a dried hay, almost dried grassy like note to this beer and the pale malt has a honey like character that is accentuated by the fruity hop notes.

This is a subtle beer all around. I drank it on the warm side of cool, which seems to have brought out a lot of the flavors & I find that I am quite enjoying this beer. We’ll see how I like it at a bit cooler of a temperature (around 50°F) tomorrow. The hop character, while not over the top, has that raw & fruity hop character that at a much larger amplitude would be appropriated for a hoppy Pale Ale or IPA. Much better than I expected.

At cooler temperatures the bright, tropical fruit notes fade a bit and this becomes more herbaceous and green in its hop character, but that Sauvignon Blanc like grape character also starts to come out, which wasn’t noticeable previously. I definitely like this on the warm side of cool 55°F or a bit warmer is better for this particular beer; this is certainly a bit atypical for a lager.

NB’s second major lager offering is a pale lager (no traditional styles here) in a 16oz can.
Straw golden – nice head and retention, too.
Hops hit the nose first. Not really traditional noble hops either. Slightly citric and earthy hops. I know this is using Nelson Sauvin as well as some continental and UK variety hops in a blend, so you get a little of each. I’d say the NS’s might be the strongest note as they’re a little bit orange-peel like. The malt note is there, but it’s mild and more of a support player.
The flavor continues with that theme. A little bit of breadiness on the front of the palate and hops on the back end. It’s definitely not a hell or pils, but is charting a unique path. The NS hops give it just a little bit of lemony flavor, although there’s a tiny hint of onions I get from certain hops. There’s no DMS or diacetyl, but there’s also a very subdued malt note. I wish it had a little more body as right now it seems to be more of a supporting element for those hops.
Not bad, and probably a beer that macro fans would appreciate. It actually reminds me a tiny bit of an “Imperial PBR” although obviously hoppier.

My personal bias is that I’d rather see someone make a good “American helles” instead of all of these hop-forward lagers featuring unusual hopping. To me this is an ale brewer making a lager and as a result you get similar strengths and weaknesses. Hop heads might like this, but I wonder if it’s enough to satisfy them either. It’s an odd one, but who knows – maybe this could be a huge conversion beer?

There's something about certain lagers, American, that is distasteful for me. It's like a stale grain, or odd sweetness. I don't really know how to describe it--but it's in all macros and most AAL styles.

Here we have NB making a lager...a pale lager. But that staleness tastes remains. However, the yeast and hops do well to calm this off taste (for me) down quite a bit. It's there up front, but the hops clear it up and give the brew a nice zing on the end.

It's light in feel and carbonated. I'd have it again on certain moods, or if it's really hot outside.

T: Grassyness, faint lemon rind, crackery notes along with some bready sweetness. Some mineral & soapy hoppyness as this warms along with more grassyness & some grainyness. Finishes grassy, citrussy & fairly crisp

I'm sure a few of these will go down great out on the lake or chilling this summer; but this is a little too stripped down for me, give more hops & or malt please. I doubt this will even make my summer canned beer rotation this year...

Poured from the can into a standard pint glass.

Appearance: The beer pours a clear amber color with close to a finger of fluffy white carbonation that fades to a ring around the pour.

Smell: Sweet malt with some light citrus notes. Not overly exciting but nice.

Taste: Fairly light and easy to drink. Malt forward, but there is enough hop presence to keep things interesting. Some citrus and herbal notes mixed in with the malt.

Mouthfeel: Medium body with tingly carbonation. The bubbles are a bit large. The finish is quite dry.

Overall: This is a solid beer for the summer. Very easy to drink, I would have another.