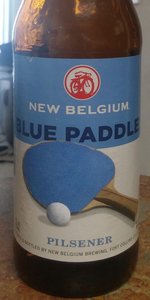 This beer pours a crystal clear pale golden color with half a finger of fizzy bright white head. Retention is minimal and there is next to no lacing either.

Smell is very subtle. Just grainy at first, but if you agitate the beer you get a nice floral aroma as well as some peppery spice.

Taste is the same, very bland. Next to no malt character, barely picking up on any yeast, and even the peppery spice in the smell is nearly non existent.

Feel is light and slightly watery. There is a good bit of carbonation on the finish which is nice.

Overall this beer is not very good. There is so little flavor in it that you would probably be better off (or at least no worse off) grabbing Bud Lite instead.

Pilsner. As an American, I see this style as the McDonalds of beer styles. Typical, unexciting, yet often solid. That said, this is akin to a specialty sandwich...yum..nicely done, but I'd rather go to a nice sit down restaurant.

The pour looks like a typical pilsener with its bright yellow color and moderate white head that eventually fade and laces.

The aroma begins with doughy sweet malts but I also get a kind of cooked corn character that I didn't care for. And there is a low to no hop profile.

Light to medium body. Smooth though.

The taste seems to be a step up with less of the corn aspect and more of the doughy sweet malt aspect. Somewhat clean and crisp finish.

Poured a copper red color in a Brooklyn Oktober Fest glass with a 3F head.

Appearance: Slightly hazed golden straw color with a nice fluffy white head forming leaves behind speckled lacing in concentric patterns at that. Aroma: Upfront nice biscuit malts with some Saaz peeking through giving a nice peppery hop profile very clean altogether. Taste: Incredibly crisp and smooth no cloying off flavors delivers light malt sweetness and finishing hop zest in the finish. Mouthfeel: Light bodied smooth but a bit spritzy carbonation. Drinkability: Is excellent awesome summer beer I wish I had this one at my disposal, that would be key.

Mouthfeel: light to medium light bodied beer. Highly carbed but not much of a tickle which is unexpectedly nice.

Drinkability: a nice guzzler but can't compete with the true thing across the pond.

On the pour the beer is a crystal clear gold color with an impressive head that is brilliant white with the residual lace a fine sheet to cling mightily to the glass. Nose is malt, clean, crisp, as most Lagers/Pils seem to be. Front is malt and slightly sweet, the top skinny, the finish has a splendid hop presence, pleasingly carbonated, droughty long lasting aftertaste. Im a big fan of New Belgium, and proudly say that this is one of a handful of Lagers/Pils, that I actually like.

Overall:
It's a very good beer.

Appearance – The beer pours a light golden color with a two finger head of fizzy foam. The head has a great level of retention, very slowly fading over time to leave lots of foamy lace on the sides of the glass.

Smell – The aroma of the beer is rather light overall with the aroma constituted mostly by a slightly grainy and bready smell. Beyond these aromas are some very light hints of grass and some lighter fruits of an apple and pear nature.

Taste – The taste begins with a quite bready flavor mixed with a little bit of fruit of apple and pear. Along with these flavors are some lighter flavors of caramel and a little bit of a grainy taste. As the taste moves forward the fruit fades a tad all while the grain grows stronger with some hop flavors of a grassy and slightly yeasty taste coming to the tongue. With a surge of the grain that comes at the very end, and a lighter level of an herbal taste, one is left with a moderately crisp, but still rather flavorful and malty flavor to linger on the tongue.

Mouthfeel – The body of the beer is rather thin with a carbonation level that is on the slightly higher side. For the style and the moderately sweet, yet crisp and bready taste,s the feel is rather nice and creates a rather easy drinking feel for the pilsner style.

Overall –A little on the sweeter side, but with enough grassy and herbal hop and some more bready and grainy flavors to keep it all balanced. And at an only 4.8 % abv. this is a rather nice easy drinking pils. A great summer time brew.

I love this pils. Refreshing and very session-able, without being watered-down or flavorless.

Nice golden yellow with an ample white head that laces nicely down my glass. Wonderful, fresh grassy smells with a mild note of citrusy sweetness.

Not too much power in regards to maltiness, but still appropriate flavors of honey and citrus. Clean, dry finish with a forward hop note. This is crisp and bubbley. Carbonation is plentiful.

This would be a nice transitional beer for someone who likes your standard American swill as they enter "micro" territory. And this would be a good time to turn on the grill and get some garden fresh veggies on it.

Got a couple of these from mugglesandhops!

Blue Paddle from New Belgium Brewing Company
Beer rating: 81 out of 100 with 1463 ratings