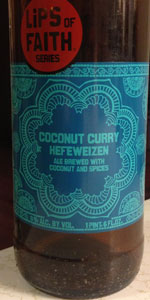 3.52/5  rDev +3.8%
look: 3.75 | smell: 3.5 | taste: 3.5 | feel: 3.5 | overall: 3.5
October 12th, 2013 - This is one of those brews that seems like it might be a meal in a glass. But New Belgium keeps the flavors from becoming liquid food. Instead, it's an example of how non-traditional tastes can push boundaries aggressively, and spicily. The base of the aroma is like a hefeweizen, but a Japanese curry accent: ginger, brown sugar and...more ginger. I don't taste the coconut, but I do get plenty of that sweet, sugary Japanese curry. Like the aroma, the taste begins with a light hefeweizen touch, and then the curry kicks in. And THEN it kicks in the door, all the way to the aftertaste. The coconut begins to glow in the aftertaste once the brown sugar sweetness disappears. And there's almost a flavor like chicken, or at least, my brain is substituting in chicken to make the flavor make sense. Lemongrass makes a brief appearance too. All of these curious flavors are almost cloying, but stop just short of that, making this bold brewing adventure a real success, and a drinkable curiosity.
Jul 30, 2015

Reviewed by Bluerabbitbell from Pennsylvania

Rated by JadeenY from California

Rated by imericcraig from Michigan

3.71/5  rDev +9.4%
look: 3 | smell: 3.75 | taste: 3.75 | feel: 3.75 | overall: 3.75
"The list of spices in this coconut curry hefeweizen is almost as long as the list of awards bestowed on homebrewer, Remi Bonnart. Together, we brewed up a traditional German-style wheat beer whose fruity esters and spicy phenols pair perfectly with the spicy and fruity character of curry spices. Pour yourself a plateful." Brewed in the style of a German Hefeweizen with curry spice and coconut added. Brewed as a one-off release for the Lips of Faith Series, available in 22 oz. bottles and on limited draft.

Poured from a 22 oz. bottle to a New Belgium Globe glass. Served above 50 degrees Fahrenheit.

(Appearance) Pours a foamy fizzed head of a pastel white color over a densely hazy pale amber body with abundant flecked sediment in suspension. Surface clumps of pulpy mess are an uncommon find, but easy to spot floating on the surface of this beer. Retention is below average and lacing is light and spotty. 3

(Smell) Abundant spices, nutmeg, cinnamon and evidently curry coalesce into a hearty, extremely potent nose bomb. Under the spice I catch notes of cereal wheat, pale malt, and the soft creamy sweetness of coconut milk. The notes of banana and clove commonly found in hefeweizen seamlessly blend into it all. Potency is very high. 3.75

(Taste) The flavor carries through much of the spices up front, heavy nutmeg, and curry powder up front, paler notes of wheat and coconut husk. The occasional chunk of raw ginger comes through and spices things up a bit. Hints of the hefeweizen yeast base creeps through, most notably banana and clove, which pairs surprisingly well with the spice profile to generate a flavorful spiced loaf banana bread. Finishes mildly sweet and profoundly spiced with a lingering curry, nutmeg and ginger trail well after the swallow. 3.75

(Mouthfeel) The texture is slick, mildly chewy, moderately dry. Carbonation is moderate, generating a moderate frothiness and mild crispness. Body is heavy for the style, medium/heavy overall. Balance is earthy and peppery spice over sweetness. Alcohol presence is low, and there are no notable off characters. 3.75

(Overall) This is one divisive beer! As over-the-top as Coconut Curry Hefeweizen is, I find myself enjoying it as a unique experiment in unapologetic spice overdose. There's no cutting the edge of the spice which leads the entire beer from aroma (some may say the appearance as well) to the finish, although the coconut comes through gracefully and as a pleasant pairing, dishing in a touch of welcome sweetness to counter. Far, far separated from the roots of the traditional German Hefeweizen, beers like this might cause for a passionate rewriting of the Reinheitsgebot- but paired with the right foods, there is a very special niche for experimental beers like this one. This would no doubt go excellent alongside quality Indian or Thai food cuisine, both of which commonly use many ingredients found in this beer, regularly in equally unreserved doses. 3.75

Nov 24, 2014
Rated: 1 by mulerofthewhalez from California

Rated by kurthy from Iowa

Appearance 3.25, Aroma 4, Flavor 4.5, Palate 3.5, Overall 3.81. Final weighted score: 4.1
This was a good example (for me) of trying something against my better judgment and being well rewarded. I’ve been disappointed by most New Belgium offerings and only tried this because I love Thai curries. Surprise! This is a very aromatic beer in which I can actually taste the coconut mulled with the spices – a mild curry but still very good. Gotta find the sales receipt from whence this came to buy some more.