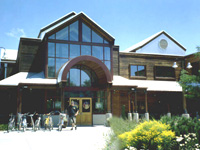 4.53/5  rDev +4.1%
vibe: 4.75 | quality: 4.5 | service: 4.25 | selection: 4.75
My previous visits here have all coincided with attending the GABF. First in ’04, and then ’07, ’08, & ‘09. At least two of those times, it was a straight from the airport run up to grab La Folie; back when it was a two bottle per person limit, non-pasteurized cork & caged were they. So, yeah, I’m due. Remember that sick super cool kids tour we got from the QA guy that year? Yeah, right, and when we got back over from the bottling side, and Vinnie Cilurzo was just standing there suspiciously at the bottom of that spiral slide? WTF that was about we’ll never know. Thems were some days, now ten years gone. My first observation as we come rolling up this visit is that it’s kind of funny, but completely unsurprising, to find that Glenn having permanently relocated out here from Jersey, lives a big 0.3 miles from New Belgium…

Big arched entranceway with a large swag/merch corner. Large block tiling floors, phat beam rafters & uprights, and windows looking outside (as they often do) over the scene out front. Wonky skate key shaped gray concrete topped bar, panel base and no foot bar on the back wall; seating for 18 or so on steel framed wood chairs. Bottom sheared 22’s lamps tracing the bar. A couple of triple wide glass front coolers, an angled double wide, and another triple wrapped around running behind half the length of the bar with bombers, six packs, 12 packs, cases, and even a few kegs feeding a half dozen tap handles off the end of it. Surprise (special) beers posted on the barback blackboard space corner over what looks like a crowler crimper. A couple a tables here and there.

The printed list shows beer, description, ABV, IBU, and pricing for drafts served in 5oz shortys and then full (12oz or 16oz) pours, depending on which beer it be. I started with the 1554 Black Lager (roast, chocolate) and then the Peach Kick (light & easy peachy), did a shorty of La Folie (because I would be remiss otherwise), and then got to the Abbey Belgian Style Dubbel (Dubbelly love) because yes please. The beers were very good.

We may have gone on walkabout some. I will neither confirm or deny that we jumped on tours in progress and saw the most Foeders in one place outside of Rodenbach and that cool upstairs space with the mad mosaic tile work and bar. And that new (to me, anyway) side room with windows forward & rear and a straight concrete topped bar seating 8ish on the far end. Arched ceiling with a center spinny fan, and a high up mural drawn. A single barbell pouring 8 beers, reasonably dupes from the front room. Tables riddled about; 7 lows and hightops, a bit of bar counter space, and a couch and cushy chair set up. Lot of room to play out front, too. Garden space with table & chair set ups umbrella’d up, fire pit, and food truck action.

Environmentally hip for Earth’s sake, having moved to being 100% employee owned through an ESOP, anniversary bikes, the intricate beer art, and a thousand other little things that make them much cooler than you are, they’re a class act and not for show. And that barrel program… madness. This is why you drove up to Fort Collins.

Rated by Augy from California

4.22/5  rDev -3%
vibe: 4 | quality: 4.25 | service: 4 | selection: 4.5
Let's call it a shrine of the craft beer era, huge facility north of town (parking is a challenge.) It seems like there are 7 different ways into the tasting room ( for this review I need to qualify 2 things: I did not explore all of the place, and I've been drinking) 6 sided bar seats maybe 20... tables, patio, food truck... 20 plus beers on tap, I had the Oakshire and Single Hop Citra... really really nice...(I'm starting to believe draft is the way to go). Friendly knowledgeable bartenders. Definitely pilgramage worthy.
Sep 30, 2019
Rated: 4.75 by atlbravsrno1 from New Hampshire

4.17/5  rDev -4.1%
vibe: 4.25 | quality: 4 | service: 4.25 | selection: 4.25
I'm trying not to let their takeover influence my review. To see my totally unbiased opinion, check out my review from the Asheville location a few years ago. Anyways, the spot is great. Big, open, totally Colorado. Looks can be deceiving, because from the outside, it looks huuuuge. Inside, the bar is actually pretty small. I didn't mind. I was able to snag a seat and get one of their pilot kit beers. It was really good. For the most part, I've always really enjoyed this brewery and wish I still could. I'm not sure that if I went to Denver again, I'd make the drive, knowing what I do now. Shame.
May 26, 2019
Rated: 3.81 by Dalbeast from Wyoming

4.82/5  rDev +10.8%
vibe: 4.75 | quality: 4.75 | service: 5 | selection: 4.75
Large craft breweries don't usually make for the best taproom experiences. I mean, sure, they're still fun, but it's a scrubbed and hurried sort of fun, like an afternoon at an amusement park. While you can't begrudge a brewery's success and expansion, there's nothing wrong with missing the old days, back when a place was new and relatively small and had more an intimate feel. Russian River's beers may be better on the whole than, say, Millstream, but I'd take Millstream's quaint taproom over RR's industrial maze.

4.43/5  rDev +1.8%
vibe: 4 | quality: 4.25 | service: 4.75 | selection: 4.5
Interior of New Belgium is a little tight and small, especially when considering the weekend crowds. The bar spans the length of the space offering a half dozen to dozen attendants pouring beer, filling growlers, or selling 6 packs from the coolers behind the bar. Staff is all friendly, out going, and helpful. It's a very kind bunch of folks. Beer on tap is all New Belgium's offering their flagships as well as a few Lips of Faith specials and tap-room only beers. The outdoor patio was filled with people on the cloudy, summer day we were there. Yard games were available while a local band played. Seating was offered all around the patio in form of the landscape rocks and tables. A few food trucks were driven in offering on-site food, otherwise there is no food available. Great spot with a fantastic tour. The tour features a sample in every room, even occasionally pouring pre-aged La Folie.
Apr 03, 2018
Rated: 4 by Shy_Traveler45 from Montana

Rated by Shawn28art from Texas

4.28/5  rDev -1.6%
vibe: 4.5 | quality: 4.25 | service: 4.25 | selection: 4.25
Absolutely gorgeous campus. Lots of space inside and out to enjoy a beverage, throw a frisbee, play some Cornhole, or just relax in the grass. Solid selection of beers on the board featuring their tradition Belgian and famous sour ales to their American style options. Wouldn't mind seeing a little more info on the beers available though. I wish I had more time to explore and hang out here. The tour sounds fantastic which would explain why it books up so quickly.
Aug 18, 2017

Rated by JDGERK from Colorado