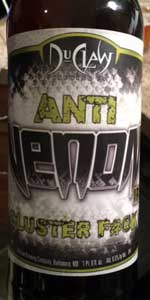 I don't know a lot about cluster in isolation, so this is cool beer, but it also seems to show or at least hint at a one dimensional nature for this hop. The IPA itself is fine, some medium crystal malt in here to make it bigger, and the hops are pine and bitter more than anything else. The aroma is all hops, not overbalanced despite the larger grain profile, and the flavor is the same. The hops have intense bitterness capacity obviously, but their flavor is a little harsh to me, maybe it's how they were used, but they don't scream elegance to me. Carbonation is nice and the medium body has a sticky oily aspect to it as well. Fine beer overall, but I would love to compare it with others in the series.

Label: It’s DuClaw, so it’s pretty simple. The Anti Venom series relies on some white/black contrasting “hop cones” (mimicking Venom) then throws some old Spider-Man comic green text in there to say “Anti” and the name of the hop. Why they chose to say Clusterfuck instead of simply Cluster is pure marketing, and makes the whole thing look a bit childish and even more like a comic book. At least Flying Dog writes “Bitch” on their label if that’s the actual name. So it’s marketing in a post-SBJ DuClaw. Fantastic first impression.

Pour / Appearance: Pours nicely, with notable carbonation but not so much that the headspace will soak up any hop aromas. Despite the picture, this leans more toward gold than amber, and is better as an IPA for it. Lacing is minimal, even with a freshly washed glass, but not overly expected. Retains a thin, bonewhite head at all times.

Aroma: Sadly, little to none. Cluster is a dying hop breed in a lot of ways (Weyerbacher’s “Cluster’s Last Stand” is more than a pun), and this isn’t the best showcase for what it can do as a late boil or dry hop addition. Frankly, maybe it is actually, as Cluster is quite probably the oldest American Hop, with high Alpha Acids and middling Betas. It’s not meant to be an aroma hop, and found more historical success in its ability to preserve high alpha acid with age. So it’s a fool’s errand to make a cluster IPA smell good on hop alone, but that’s the showcase. And it just doesn’t work.

Taste: As discussed, Cluster is a bittering hop. The beer is dominated by floral and pine notes, somewhat reminiscent of Northern Brewer and Cascade. So it tastes how most people just getting into beer would expect an IPA to taste: bitter, flowery, and a bit watery from a lack of darker malts. Now, how much this is attributable to DuClaw and how much is attributable to working with an old, old hop is a debate, but since DuClaw brewed it, I’ll aim at them. This has no malt character, and not in a dry, pleasant, effervescent way. What little is there seems like light crystal and hints of biscuit, with possibly even a touch of wheat for body. I’m hesitant on the wheat due to the overall clarity, but it’s not like DuClaw produces only unfilitered beer. It’s not a bad beer; it’s just not an old-time recipe that might have suited Cluster better nor is it a particularly outstanding IPA recipe as is. It’s a water/sugar pale ale.

Overall: If I sound harsh, I suppose I mean to be. Cluster is an interesting hop, but not necessarily one that warrants, or hell even subjected to, the single hop treatment. In the hands of DuClaw, who produce middling beers (yes, their barrel projects are great, I know) and whose flagship is based on flavoring syrup, maybe some more time should have gone into figuring out the recipe that’d suit Cluster, not the Anti Venom line.

Bottom line: Buy if you want a pure cluster experience for cheap, taste if you’re at a DuClaw pub and it’s on tap, avoid if you don’t enjoy IPAs or DuClaw’s general offerings.

Got this in a growler at my favorite local MD beer distributor and when I first poured it into my glass I was a bit leery about the smell, and then the first sip. It has a caramel appearance and definitely a distinct hoppy smell. As I drank the pint, I liked it more and more with each sip. Caramel tones with a slight hop flavor will have me returning soon to refill the growler!

Pours a clear, dark golden orange color with apricot colored edges and a half finger white head that quickly settles into a lasting ring. Some spotty lacing left behind.

Medium body with a blast of sticky hop bitterness that lingers over the sweet malt backbone into a dry finish. Prominent resinous pine bitterness with slightly spicy, grassy hop flavor but it's lacking the tropical/citrus sweetness found in the aroma. Good hop flavor but slightly one dimensional. The malt backbone is much stronger than I prefer with strong caramel malt sweetness along with hints of toffee, toasted bread, dark fruit and biscuit. Subtle boozy heat in the finish.

Anti-Venom - Cluster F#@k from DuClaw Brewing Company
Beer rating: 84 out of 100 with 31 ratings