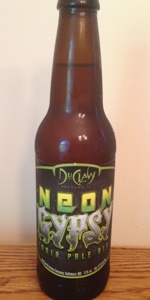 Notes: Neon Gypsy, our 6.5% abv India Pale Ale, is medium-bodied and clear with a thin white head and crisp mouthfeel. A vagabond blend of 7 different hops dominates with grapefruit and citrus flavors and aromas, accented by notes of pine, that continue to roam your palate long after its clean, hoppy finish. Disconnect, and you will find your way.
View: Beers
Reviews: 70 | Ratings: 467 | Log in to view all ratings and sort
Reviews by hoppytobehere:

For a fresh IPA this thing is dull as hell. Malt bomb that might have been a good IPA 10 years ago. Things have changed for the better. Avoid this brew.

I must have gotten a bad one, but the beer had floaties in it, with a strong biting not-so-great flavor. Almost no head. Definitely wouldn't drink again if I thought this was how it was supposed to be. Got it in a "Beer of the Month" club shipment, and I like IPAs so will give it another go. Addendum: I used my Fizzinator on the 2nd one. Not much of an improvement. Really just not my taste.

*Total Wine advertised this as a Centennial single-hopped beer, but the bottle says 7 hops are used. Don't rely on chain liquor stores for info ;)

Pours copper with quickly dissipating head. Plenty of malt in the aroma for an IPA with some vague citrus. Tastes earthy, and then very bitter. I wish one of the 7 hops would stand up with some aroma or descript flavor, but instead, I get sugar sweetness. A bit strange. Carbonation is low, but body is nice.

Neon Gypsy has a thick, off-white head, an amber-copper color, lots of tan chunks throughout, and fairly heavy lacing left behind on the glass. The aroma is of spicy malt, some citrus, some caramel, and hop resin. Taste is of sweet, white bread, white bread crust, peppery rye, strong, yet, not harsh, piney hop bitterness, and shades of grapefruit and citrus. Mouthfeel is high medium and sticky, and Neon Gypsy finishes dry and puckering. A full-flavored, but pleasant ale.

Color is copper. Good head retention. Nose is primarily grape fruit, slight pine, with undertones of garlic. Taste is biscuity with hints of crystal/caramel. Good balance. This is a good beer and you should drink it with your mouth.

Swift989 from District of Columbia

Orange oin color with a 1" head that slowly falls. Pine and citrus are the main aromas. Caramel, pine, orange, some grapefruit, and a moderate bitterness creates a good flavor profile. Not over the top, but an extremely easy to drink IPA.

From the bottle: "Unplug with this golden IPA infused with grapefruit, citrus, and notes of pine by a vagabond blend of seven hops that continues to roam your palate long after the beer's crisp finish. Pop the top, it's time to ... DISCONNECT!"; "Respect_the_Fluid".

Knowing that this beer was fairly close in the rotation, I scored a fresh bottle yesterday at one of our local supermarkets. Pop!ping this cap meant that I could perform a no-holds-barred pour, which I precisely what I did. It was actually kind of exciting to watch the head foam up in a massive, pillowy way, only to finally settle into three fingers of dense, foamy, tawny head with good retention. Color was Amber to Deep Amber/Light Copper (SRM = > 9, < 13) with NE-quality clarity. Nose had a fresh dank quality, like somebody had scored & then dumped the baggie into the boil. Very resinous, kind of minty, slightly citrusy and my hophead mouth was beginning to water. Mouthfeel was medium. The taste had a bitterness that bordered on oversaturation. I was getting more of a lemony-grapefruit citrusiness from the hops then any other flavor, but it had a pithy, rind-like bitterness that was not being offset by the accompanying piney mintiness. Finish was dry, but by that, I mean that it had a bitter astringency that left an unpleasant dryness in my throat. This is one of those instances where too much of a good thing is ... TOO MUCH!

Smell: Resinous and dank; primarily in a piney and oniony direction

Taste: The caramel malt base is quickly subsumed by the bitter blast of resinous, piney hops; aspirin-like oniony bitterness builds through the middle and lingers into the finish

Overall: Quite a range of hops were used but the Amarillo overwhelms

I've said it before and I'll say it again I'll say it every goddamn time I review a beer from this place: their branding is horrific. Like a bad-boy wrestler's outfit in a former soviet state. Like a facebook meme posted by your adult cousin who's always talking about personal responsibility and badass motorcycles but he's been living with his folks and driving a dodge omni ever since he got arrested for selling counterfeit batteries in the Jack in the Box parking lot.

Aesthetics are a bad taint, man. They influence our senses.

And that's my only thought as to why this beer is slightly underrated, other than maybe that it's been a while since I've had a decent IPA.

Its pour is amber and clear with a small head, maybe a little bit flat but nothing gross looking.

Smells bright and biscuity. The hops up front are nice and citrusy, pretty contemporary, and then the malt finish is a little old school.

Uhh--oh, check my earlier comment. As I acclimate to the flavor profile after a while away from IPAs, it's actually pretty tame. Well put together, but tame. The cereal malt is a little too brewpubish, and it kind of clashes with the hops. So maybe it's not that well put together. I--I don't know. It's okay. Nothing offputting. But the first sniff and sip were really good and then about halfway down the pint flaws were popping up at me every which way.

With a bevy of hop additions, the brewers of DuClaw uses a mix of contemporary hops with traditional pacific northwest varieties over a slender malt foundation for a sharp and citrusy taste to draw the ire of hop-heads near and far.

Golden with light amber tethers, the turbulent beer builds a tall and frothy cap with sturdy retention and lace- all working to unleash a sharp and citrusy bouquet of lemon, lime, herb, grapefruit and pine; all seeming candied with a light coat of honey. Its initial taste is quaint in its maltiness with those honey-dipped sweetnesses and thinly of caramel and toasted bread.

But the malt doesn't remains a part of the picture long as the middle shows a sharp decline in its influence of sweetness and breadiness, in favor of the growing onslaught of hops. Sharp, grassy and citrusy, the piquant flavor of orange peel, grapefruit peel, lime peel- all of the tarter, under-ripened variety command the middle while a follow-up of muddled pine shavings and fresh-cut grass give an herbal and juniper-like bitter spiciness.

Medium, yet registering lighter on the finish, the hops, drying malt and alcohol all facilitate is crisp, clean and refreshing taste with some mild hop-derived astringency that acts tangy alongside of the bitter. With an grassy and piney aftertaste, the beer finishes with lingering bitterness with hints of chive and lemongrass.