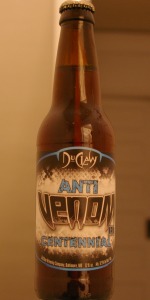 Notes:
View: Beers
Reviews: 7 | Ratings: 53 | Log in to view all ratings and sort
Reviews by Camjmorton:

From the bottle: "The Anti-Venom series reinvents the IPA by changing its hop bill with each new brew. Anti-Venom: Centennial boasts a grassy aroma and floral, citrusy esters that linger to a dry, bitter finish. Pop the top, and feel the ... bite of the century!"; "Respect_the_Fluid".

I have to apologize for the delay in reviewing this one. It is clearly one of my signature approved pics, but I have no idea when it was taken or why I have taken so long to review the beer. 8=(

Needless to say, once I Pop!ped the cap, I employed a VERY gentle pour in decanting the fluid into the awaiting glass. It looked fairly clear coming out of the bottle, but once into the glass, it took on a slight haze, so I backed off and stopped. An in-glass swirl raised a finger of dense, foamy, tawny head that settled back to wisps fairly quickly. Color was an oh-so-slightly-hazy Amber to Deep Amber/Light Copper (SRM = > 9, < 13). Nose had a citrusy bite, although the caramel malts were fairly assertive at this point. Mouthfeel was medium. The taste was actually quite cool and minty with an underlying caramel sweetness. Brach candies used to make caramels with a flavored cream center and one of my favorites was the Peppermint Caramel, of which this was quite evocative. Orange Caramel was my second favorite, with all others taking a back seat. I spent many childhood afternoons with my late maternal grandmother after school, watching various television programs & eating those candies. I digress. Finish was semi-dry, very cool, minty and quite tasty. Yes, it may not have been what it once was, but it was not at all bad.

*This beer is listed twice, so I went with the correct ABV of 6.5

Copper with billowy head that slowly recedes. Smells mildly of citrus oil and some caramel malt. Fortunately, the flavor is much bolder with plenty of grapefruit and just as you get that hint of caramel--bitterness, so much bitterness. Could use more balance, as the drinkability is lessened. Really enjoying the oily mouthfeel, though. Otherwise, body and carbonation are fine. The other Centennial IPAs out there just blow this one out of water (though the 2 I'm thinking of don't distribute to MD).

I'm a DuClaw fan (they made my first "craft" beer called "Ravenwood"). I usually drink DuClaw there, on tap, but I picked up this in bottles to give it a try. Hazy gold to orange in the glass with a mild hop presence. Somewhat balanced in flavor, with a nice malt backbone, but lacked the bright hop presence of some good American IPAs. Still, I enjoyed it more than some--perhaps just for old time's sake.

*This beer is listed twice, so I went with the correct ABV of 6.5 (I copied this from another review)

Pours a hazy dull orange color with a big off-white head. Head retention is good and there is thick bands of lacing on the glass. Aroma is grassy hops and biscuity malt.

Flavor includes some citrus hops and floral hops but is primarily grassy hops with sharp bitterness. The finish is dry biscuity malt. Mouthfeel is crisp, bitter and not too light. A pretty bitter standard AIPA, not bad at all!!!

Nice 1/4 inch head on a beer that tastes of toasted malt and citrus fruit. Orange and lemon stick out. Very nicely balanced. Could do several of these.

Only a handful of reviews on this is quite strange. Picked it up in my mix six section at the local House of 1,000 beers.

A - Clear bright amber orange color with good bit of carbonation a 1/2 inch of head that settles to a good lace ring. Sticky lacing throughout. Standard IPA really.
S - Even though brewed a month ago it's still has a well rounded juicy hop smell with good malts and some bread.
T - Taste is good rounded with the hops of choice being slightly sharp but mostly sweet in nature with citrus and mango like bitterness. Malt body balanced and good crystal malts.
M - A bit thicker than I expected with a medium bodied. Could be a bit smoother.

Overall not bad but I was drinking Stouts all night. I did find this very drinkable and aromatic.