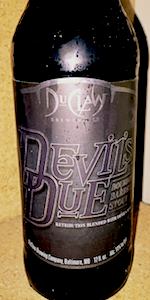 Notes: The perfect balance of Retribution Imperial Stout and Devil’s Milk Barleywine, Devil’s Due is black, full-bodied, and smoothly drinkable. Its seductive swirl of dark chocolate, coffee, smoky malt, and citrus fruit flavors, infused with notes of charred oak, vanilla and caramelized sugar, disguises a strong, warming alcohol presence (11% abv) that reminds those who dance with the Devil that eventually, a price will be paid.
View: Beers
Reviews: 23 | Ratings: 140 | Log in to view all ratings and sort
Reviews by WorldWideStout:

I will preface this by saying that I think Retribution is a delightful beer, and have never been too impressed with Devil's Milk. A fellow beer aficionado also told me that he was duly underwhelmed by this beer, so I did not go in with inflated expectations.

A: Dark brown, around one finger of head that dissipates fairly quickly.

S: Pretty terrific. Plenty of bourbon, brown sugar, and butterscotch. It reminds me a lot of this good cake I had one time at a church choir party which had a crap ton of bourbon in it. It was delicious, but probably could have been more balanced.

T: Very bourbon-centric. It's a bit too much for me, but if you like bourbon, man you'll like this. There is also plenty of sweetness. Not much of an aftertaste, surprisingly. This beer tastes like a bourbon barrel-aged barleywine. No stout to be found, really.

M: Actually a bit more carbonated and thinner in the body than I was expecting. I always struggle with how to rate this category, as my comments mean that it is more drinkable, but less rich. Which is more important?

O: A tasty beer. I would personally prefer less bourbon. I consider Devil's Milk to be an American-style barleywine (can't remember how it is categorized on here), but either the bourbon barrels or the small amount of Retribution present in this beer has turned it into more of an English barleywine, my favorite style. I think it is more refined than a fresh Insanity, but not at the level of MoAS. Definitely recommended, especially at the price point, and I think aging for a year or so could do good things. Getting a few stout flavors in here would have made this phenomenal.

I had high hopes for this. The smell was sweet and mildly roast. The taste was harsh bourbon and stale fake chocolate.

I wonder what the ratio of barleywine to stout is?

This was pretty close to black, there was a little amber around the edges. It poured with a medium sized off white head.

The ratio seems tilted towards stout in the nose, lots of chocolate here. I also found a decent amount of bourbon and vanilla, plus maybe a little coconut. Maybe a little cherry as well.

The flavor comes across as stout-heavy as well but not to the same extreme. I tasted some cherry and toffee towards the end that were barleywine-esque. Up front this was all stout, plenty of rich chocolate with some light char. Nice bourbon and vanilla notes mid-palate. The finish was a bit rough though, lots naked wood and a too-strong raw alcohol burn. Body was pretty typical of barrel aged beer, oily rather than chewy.

Overall I liked this one. It's probably one the cheapest barrel aged beer you'll find as well. If I came across 4 packs I'd buy 1 or 2, not quite good enough for a case purchase though.

From the bottle: "This blend of Retribution Imperial Stout & Devil’s Milk Barleywine-Style Ale will claim your soul with a mix of chocolate, coffee, smoky malt & notes of charred oak, vanilla, & caramelized sugar. The Milkman cometh, so pop the top and ... settle your debt!"; "Respect_the_Fluid".

Yeah, I'm getting into the big boys as this horizontal begins to wind down. The bottling date is 12/08/14, making it just over two years old. I helped it to celebrate its near-birthday with a Pop! of the cap, followed by a gentle pour. An in-glass swirl raised a finger of foamy, dark-brown head with decent retention. Nose smelled so strongly of smoke that I began to worry that the fire alarm might activate. Color was Black/Opaque (SRM = 44), allowing ZERO light penetration. Warming, the nose began to give off scents of dried, dark fruits; leather; heavy smoke & a woodiness that was simply amazing. Mouthfeel was medium and I frankly expected more body in such a beer. The taste was ... what is the opposite of miraculous? A miracle would be evocative of Heaven, while this was meant to evoke Hell. It would be like trying to equate Angel's Food Cake with Devil's Food Cake. Totally opposite ends of the spectrum. The taste was truly dark and dense with an amalgam of flavors and tastes that made me think of a Brueghel painting. It tasted like an unholy orgy, involving forked tails, protruding tongues and more sins than have been enumerated to date. Where to start? Coffee; chocolate; leather; dark, dried fruits; smoke; wood and caramel all made an appearance. OMFG! Oops. This is of the Devil, so no invoking of his counterpart. Well, be that as it may, this was mighty tasty! Finish was dry, more as a result of so many things going on at once, accompanied by a mild heat. I think that this is a good point to put on the brakes & hit the rack.

Tomorrow ... the grand finale to this horizontal! It has been an interesting run, but other breweries await their chance at me.

Appearance: Pours quite dark, like espresso, with a rocky beige head; impressive lacing and legging

Taste: The Bourbon, chocolate fudge, vanilla and caramel flavors swirl together, on the front end, with the pine and dark fruit (raisin and fig) building through the middle; after the swallow, the piney bitterness builds a bit but the mellow flavors from the stout bring up the rear; nougaty and slightly smoky in the aftertaste

Overall: Tremendous complexity accrues from the interplay between the barleywine and the stout; the flavors keep swinging back and forth

Thanks, Shaler_Tate, for the opportunity

O - This beer is a blend of Divine Retribution and Devil's Milk, I much prefer both of these on their own.

Acquired from mwrecording so a big “Thank You” goes out to him. Poured from a 12oz bottle into a tulip glass.

A: The beer is a deep dark brown color with a short beige head that fades quickly and leaves a thin lace on the glass.

T: The taste starts out sweet with flavors of chocolate, coffee, brown sugar, vanilla and bourbon. Then a hearty malt character comes in along with some creaminess. A bit of smokiness creeps into the background. The hops presence is mild as you would expect but brings a very good balance. The after-taste is slightly sweet.

M: Crisp and very smooth as well as viscous, medium-to-heavy body, medium carbonation, finish is slightly sticky but quite clean for the style.

O: Tasty, goes down dangerously easy, not too filling, very strong kick, good blend of styles, this is a very good beer to sip on for a long time.

A: The beer is essentially jet black in color—only slot traces of brownish red are visible at the extreme corners of the glass when it is held up to the light. It poured with a quarter finger high off white head that died down, leaving a short head covering the surface and lots of bubbles clinging to the sides of the glass.
S: Light to moderate aromas of bourbon and the associated vanilla are present in the nose.
T: Much like the smell, the taste is dominated by flavors of bourbon from the barrel aging process and has some initial flavors of vanilla and latter flavors of charred oak towards the finish.
M: It feels a little more than medium-bodied on the palate and has a moderate amount of carbonation along with some warming from the alcohol. It feels a little light for the style.
O: This would make for a nice beer to slowly sip and enjoy on a cold winter night. Except for the bourbon, the underlying alcohol is very well masked. It isn't as heavy on the body compared to other stouts of this caliber.