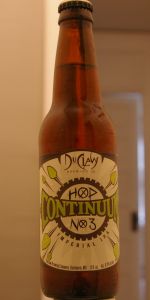 Notes: Hop Continuum #3: Imperial IPA was inspired by our desire to brew a beer similar to our precisely balanced XXIPA, Serum, but hop forward, allowing the hop flavors to dominate the palate. The result? Big citrus hop flavors and aromas with an ABV to match.
View: Beers
Reviews: 14 | Ratings: 53 | Log in to view all ratings and sort

Pours clear, gold in color with 1/4 inch head. Taste is lemon balm, lemon rind, pine, and slight malt. Medium bodied, bitter with lingering dry bitterness. Not a bad beer, but not one I would rush out for either. DuClaw makes way more enjoyable IPAs than this one.

Appearance: pours a hazy orange color with a 1/2" head.

Smell: some lemon and hop bitterness is mild on the nose.

Overall: a decent DIPA that is easy to drink. personally I would like a bit more oomph on the malt profile.

I don't see any date on the label or bottle.

Appearance: Light golden body that is hazy with tons of suspended debris. It's not just a few haze particles, it is loaded with chunks. The head is a nice thick creamy and fluffy cloud with great retention and lacing but the body really ruins it. I'm pretty sure I could strain most of this out with something like pantyhose. On the label it says "clear straw in color" and this is nowhere near clear. I haven't even poured the bottom of the bottle yet.

Aroma: It has a strong lemon and pine aroma. It reminds me a bit of lemon Pine-Sol but somehow it just smells more approachable and not chemical-like. It is actually quite nice.

Taste: The flavors closely resemble the aroma. It has a large pine presence in the flavor profile but it has this lime flavor that lingers around in the background. If I am able to cleanse my palate between sips or if I spend a lot of time between sips then it is nice. If I try to enjoy the beer as a continual uninterrupted experience then it feels like I'm being jerked by pine in one direction and slammed by lime in the other direction.

Mouthfeel: Strong bitterness with a medium body and a raspy finish. As odd as it sounds this beer just isn't that enjoyable to drink. It's just kind-of a mess.

Overall: It's a bit like trying to drink pure lime juice. It has some interesting flavors and it does have a good strong aromatic presence but the beer just doesn't meld into anything solid worth drinking. I wouldn't buy it again and wouldn't recommend it. In a bar setting if somebody handed me one I would be very reluctant. I can see a literal layer of sediment at the bottom of my glass and I still haven't poured the last inch of the bottle.

Economical, white frothy head maintains a defiant finger on top this wildly hazy orange beer with bits of floaties hanging in suspension throughout it's entirety.

Aroma leapt out from arms length as soon as I popped the top. Juicy, bitter, stinging tropical essence found it's way most immediately, only to fade out in a bit of a soapy and generically bitter fashion, leaving only a mealy, malty apparition of what once smelled decent.

Taste is immediately sweet with caramel in accompaniment with the bitter tropical presence. Dig deeper to find a noble hops quality which lingers about as long as the dry sweetness left behind.

Not the greatest thing and not the best friend of balance, but it does have a drinkable quality either way.

Feel: Heat and prickliness from the booze.

Overall: Actually not bad: A little heavy-handed with the citrus/alcohol, but the initial
trickle of malt is the saving grace that keeps the beer drinkable.

Poured from a 12 o bottle into a Belgian snifter.

Hazy orange colored body with a thin amount of bubbles; no lacing left in the glass; plenty of sediment.

Taste is full of bitter citrus, lemon and some dankness as well.

Mouth feel is almost all bitterness with a dry biscuit like finish.

Overall, this is a decent one-off beer from DuClaw, who's beers can sometimes be hit or miss. This beer might be a little long in the tooth, but it is still decent nonetheless.

Pale gold in color and hazy with a ton of sediment floating around. Big citrus aroma mixed with pine. Not much malt to balance it out at all in either the aroma or the flavor. It's a pure citrus and pine showcase. Bitter aftertaste with a medium body. Could be improved by adding some malt complexity to it. Otherwise, it's just another high octane hop blast.

Light gold with floating specks in it. White head and minor lacing. Smell is not strong but has done malt and citrus notes. Tastes like citrus pith with a tiny bit of malt sweetness which is followed by a quite aggressive hop bitterness. Not a bad beer but I have had better DIPAs.

Missed the last Hop Continuum beer so I paid the 4 dollar premium to try this one. Luckily a DIPA is worth the coin because of the ABV.

A - Damn sediment already? I guess its unfiltered but I didn't expect chunks this big in a beer thats only a month old... Head is excellent a deep thick lace ring on all sides of the glass and the beer is a good orange yellow tint.
S - Smells like a good "run of the mill" DIPA very citrus peel hops and crystal/bready malt backbone. Not bad.
T - Its good a nice level of bitter like sucking on a lemon peel and a lingering bitterness but the body doesn't seem smooth or bready enough.
M - Drinks medium body which is to be expected for the octane with a nice bitter hop presence in every sip.

Overall it reminds me of a heavier version of Two Hearted with the lemon hops taste. Not bad but nothing to revisit anytime soon.

I am still working to divest myself of the Bottle Backlog here at Chez Woody, but it is a slow-moving process, what with having to take, resize & get pics approved; sift through the avalanche of beer; decide on a triage; ad nauseum. Thanks, though, to The Friendly Greek Bottle Shop, purveyors of fine ales & lagers!

From the bottle: :"Craft Be Cherished. Rules Be Damned."; "Clear straw in color and medium-bodied, this Imperial IPA is a citrusy medley of hop forward flavors and aromas, balanced by subtle malt and pine notes. Pop the top and ... Hop into the Continuum!"; "Respect the Fluid".

Pop! the top/cap, I did, and then I executed a gentle pour that still raised two-plus fingers of dense, rocky, French Vanilla-colored head with good retention. Color was NOT clear-straw, but instead, Golden-Amber (SRM = > 5, < 7) with NE-quality clarity. Ha! Nose was heavy on the pine, but underlain with a pleasant maltiness. Mouthfeel was thin-to-medium, a bit thin for a big beer style. Flavor was initially quite pine-like, but when the malt kicked in, it smoothed out really nicely. In fact, it became just a bit too smooth as half of it was gone in the blink of an eye. Finish was dry, more pine than citrus, but it held just enough of a malt backbone to keep it from being to dry to drink. As DIPAs go, it was decent, but not earth-shattering. I can do without having the Earth shattered every time that I open a bottle of beer.

Aroma is nice, some pine and tropical notes, and it is well balanced for the elevated abv. Columbus, centennial, and cascade, my comment was its decent, but this tastes like every other IPA i've ever had

Bottled on 11/21/15. 12oz bottle poured into a tulip. Pours golden with a subtle haze and bubbles racing upwards; fluffy eggshell white head that sticks around leaving great retention and sticky lacing. Looks really nice. The aromas have lots of fresh melon. Some floral notes along with some bready malts. The flavors follow the nose. More melon along with some watermelon. Some pine is in the mix. Some citrus is there. Lemon and lime zest in the mix as well. Malts are there, but the hops still do their thing. Balanced. Alcohol goes unnoticed. Mouthfeel is nice. It's full-bodied but feels light. The carbonation is light but active. Very smooth and easy to drink.

This is a solid DIPA. Nothing mindblowing, but it's a nice brew.

A DIPA from DuClaw makes me think one thing: please don't be as bad as Serum. Judging from the nose, it isn't. I get lots of little lemon candies, backed by some grapefruit and pine. I also get touches of apricot. Malty qualities of white bread and sugar cookie appear, and make a better hop ballast than caramel or toffee would have, in my opinion. It tastes like it has a lot of Amarillo hops: namely, I taste a lot of lemon candy initially. No nasty body odor or sweat notes SOME Amarillo beers have (hint: from Rogue), just plenty of tasty lemon. I get gentle piny touches around the middle, with the malt sweetness finishing it off. So basically, this beer kind of tastes like lemon-glazed sugar cookies. While I get little bitterness throughout, the feel is very dry and tingling on the tongue. It does a good job of hiding the sweet bulk this 8.9% DIPA might have had. I like this: it's not the typical juicy fruit bomb, it's more of a balanced DIPA. Balanced in all the right ways, of course.