Everything is Taken
DuClaw Brewing Company 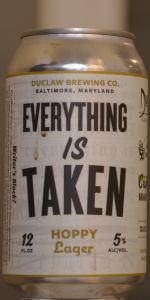 Notes: Our light gold, crisp, clean beer reminiscent of a traditional lager, that features the hop forward piney, citrus flavors & aromas of northwestern American hops usually associated with an IPA was simply dubbed ‘Everything Is Taken’. It’s a masterfully balanced combination of two of our favorite flavor profiles.
View: Beers
Reviews: 8 | Ratings: 21 | Log in to view all ratings and sort
Reviews by BobbyOlson:

A hoppy adjunct? One of my favorite underappreciated styles.

Pours a hazy yellow with a voluminous, white head.

Smells... good. I was worried. These are hard to pull off. Light spice, dry hops, and some light adjunct nodes of boiled veggies.

Tastes a lot more robust than I was anticipating; not at all like an old, hoppy macro. But still good. Light sweet tart notes up front, moving into a chewy middle of lemons and yeast, finishing with some dry hops with some grassiness on the aftertaste. Reminiscent, oddly enough, of Orval.

I-is the sourness here a pleasant accident, or was it intentional? If I were Duclaw, I'd say the former regardless and lean into it.

I'm not sure where I got a can of this beer....my guess is from the Binnys in Montgomery, IL....or from a beer store in La Crosse, Wisconsin. The beer poured a clear golden with thin white head that is not leaving much lace. The scent had a subtle dank fruit presence. The taste was nicely balanced and easy to drink with subtle sweet malt and citrus flare. The mouthfeel was lighter in body with good carbonation. Overall its a decent beer.

Poured from a can and it had a surprisingly long lasting cream-colored head that gradually fizzled down. A crystal clear golden amber rounds out a great looking color. The scent is crisp and hoppy, with pine and some citric-like coming through. Flavor has a bit of grassy pine up front, but there is a surprisingly pleasant subtle caramel flavor coming across during the middle and end of the sip. A bit of wheat aftertaste lingers longer and inhaling/exhaling deeply has a bit of light floral quality -- almost reminds me of some white teas. Pleasant overall, especially on a summer day.

A decent beer, kind of like a Vienna lager, in my opinion. A minor complaint is the very subtle metallic taste that creeps in towards the finish of each sip. Otherwise, a decent enough beer.

Pours clear, gold in color with one inch head. Taste is grass, grain, and earthy hops. Light bodied, medium-high carbonation and slightly bitter. Makes for a crushable summer lager. Would get this again.

My deep dive into DuClaw for New DelMarVa (+ DC) Beer Sunday (Week 778) CANtinues with CANother CAN for The CANQuest (tm)! I was not kidding when I said that this phase may take us all to the bottom of the Marianas Trench. 8=O Heck, I already fell as though I have bottomed out! 8=(

From the CAN: "Hoppy Lager"; "Writer's Block?"; "It's official: Every '... that's what she said' joke, movie quote, gnarly warrior name, biblical reference, and alliterative call-to-action has been trademarked. But when you're drinking a clean crisp lager that possesses a hop forward piney yet citrusy finish, who cares what it's called? Pop the top, take a sip, and you'll agree a clever name is someone else's problem."

This day has been a classic case of how to beat my brain into submission. I had sports on the teevee, I didn't read a word & I imbibed to the point of near-drooling. Sheesh! I am CANming up on the end, if I haven't already. Goo.

I was so CANxious to Crack! open the vent on this one since I simply needed to take my foot off of the gas & get right. Woof. I did a slow, gentle C-Line Glug into the awaiting schooner glass, watching in rapt fascination as it formed just over a finger of dense, foamy, rocky, bone-white head with excellent retention. Color was a gorgeous Golden-Amber (SRM = > 5, < 7) with NE-quality clarity & while The Gelt Gang of Midas, Mammon & Croesus was still on my couch, they were too drunk from the weekend & too devastated by the Packers' loss to get up, giving me the wave-off. 8=O I'm pretty tanked, myself, actually. Nose had a clean, biscuity-malt presence that made me want to weep for the passing of the 18th Amendment & the CANsense that followed in its wake. 8=( This is what a simple Lager should smell like - NOT corn & silage in the middle of Summer! 8=( The biscuity malts were acCANponied by just a kiss of the Noble hops, giving it a light grassiness in homage to '60s-era Schlitz. Mmm. Mouthfeel was medium, but big for a Lager. The taste was like throwback Schlitz, a momentary return to the PrePro recipe that did not play in the CANtemporary market. 8=( It was not hoppy enough to be a Czech Pilsner nor was it malty or hoppy enough to be a German Pilsner. Instead, it fell right in between the two. It was beautifully crisp & clean with a pleasant semi-dry finish. I CAN see filling my beach-bound Summer cooler with this, but it may not be everyone's cuppa. YMMV.

Poured from a 12 oz. can. Has a golden color with a 1/2 inch head. Smell is mild, some grains. Taste is grains, lemons, light hops, a touch of malts, refreshing. Feels medium bodied in the mouth and overall is a decent beer and a good thirst quencher.

A: The beer is clear dark golden yellow in color and has a moderate to high amount of visible carbonation. It poured with a finger high dense white head that has very good retention properties and consistently left a short head covering the surface and a wide collar covering the bottom edges of the glass.
S: Moderately strong aromas of grainy malts are present in the nose.
T: Moderate aromas of grainy and pilsner malts and wheat are present in the nose along with hints of floral hops and a light to moderate amount of bitterness.
M: It feels medium-bodied and a little clean on the palate with a moderate amount of carbonation.
O: This beer might be described as a "Hoppy Lager" but I found the taste to be all about the malts.

Everything is Taken from DuClaw Brewing Company
Beer rating: 83 out of 100 with 21 ratings