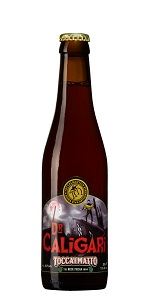 Our own take on the traditional German style: slightly sour and loaded with lots of fresh raspberries.

Notes: Doppel Raspberry Berliner Weisse. 6.1% ABV. Amber-orange in color beneath a pinkish head that fades almost immediately. Distinct raspberry in the aroma, and slightly lactic. The taste is fruity and slightly tart with notes of raspberry strawberry, pink grapefruit, and a squirt of lemon. Dry, acidic, and lightly earthy finish. Medium bodied and effervescent with a fine-bubbled carbonation. Overall nice. The raspberry comes across as a touch artificial although it's probably not. Enjoyable.

L: Poured from a bottle to a pint glass. Had a pinkish / red color and a fairly cloudy consistency. There was a thin, foamy head that quickly dissipated. Very little lacing to speak of.

S: A muted aroma of raspberries, wheat, citrus fruit, and an earthy quality.

T: Tasted of a small amount of wheat (present throughout, though subtle), a fair amount of raspberries (the dominant ingredient), a tinge of the earthy quality (kind of weird), and a hint of citrus fruit (lemon, in particular). This is a thin, watery, unbalanced flavor. You get a decent shot of raspberries up front, but then not much else after. Kind of a mess.

F: A below average amount of carbonation with a smooth finish. Light- to medium-bodied.

O: Overall, this beer is a misfire. Could've been better.

I’m really not a Berliner Weisse fan but this one looked interesting. Speaking of interesting, the pour produced probably the most indifferent activity I’ve ever seen in a beer as the moment of carbonation seemed like an honest to goodness chore for it. Unsurprisingly, zero head. Body color is a strange cross between watermelon and White Zinfandel, while being pretty murky. Nose does have some raspberries but it also has an odd beef broth thing lingering in there as well. Taste indeed starts out tart but it’s very pleasant and incredibly quenching with the raspberry flavor that also has a little apple happening. Thankfully “beef broth” is not present in the taste. Finishes light and a little wet with virtually no aftertaste. For not liking the style, I’m actually enjoying it for the most part.

Bottle at Las Buenas Pulgas. Pours a salmon colour, head that fades almost before forming, though bubbles are coming up all the time.
Aroma is a bit sour, herbs, but mostly raspberries. Something is wrong with it, I find it disgusting, rancid.
Medium body, creamy texture, good carbonation. Dry finish.
Taste follows the aroma.
Doesn't work for me.

The raspberry is very present in this berliner weisse. Some tartness but nothing overwhelming. The carbonation is high and the drinkability is alright

asked the bar man for "light, hoppy, Flat", discussion ensued and i uttered the phrase "im always up for a wierd beer". so i ended up with Dr Caligari.

you can taste the rasberries, and not much else, it is a sour beer.

i was on dark beer the rest of the evening, youngs double chocolate stout, a tobacco infused porter, and an imperial porter of no particular note...

so this was quite the juxtaposition. on the nose, nothing but raspberries came through, in the mouth its rather astringent (the only hint of hops), and exceptionally sour - given my session.

over all its a beer i would try again and despite its strength its probably one i would start the session with rather than end.

Not super familiar with this brewery, but the idea of an Italian brewery making a raspberry Berliner was just too good to pass up.. oh, and being named for what is essentially the first horror movie doesn't hurt either. This was an expensive single bottle (about $6.50 for an 11.2 oz bottle, meaning over 50 cents an ounce), but if it's good I definitely don't mind paying a bit more upfront for a great sour beer experience!

Pours a color kind of in between medium amber and burnished copper, with an ever-so-slightly-pink tint to it from the raspberry addition. Head barely appears as I pour this one... kind of a weak showing but I do really like the clear and distinct hue this one has. It's kind of medium hazy by composition with some smaller particulate matter floating around within. Decent appearance. I don't really expect much in terms of head or lace from Berliner weisse or gose beers, so yeah, not really going to bother docking them much on that.

Nose is very specifically raspberry... juicy and bright with a slightly floral bouquet in the aroma. Almost leafy and with that backing acidic tartness that smacks of lemon. Almost get a bit of blueberry and/or cranberry in there too. The raspberry is obviously the biggest note, though. Does not seem like this is a cheap quick-sour... honestly smells a bit more lambic-like than expected. I almost pick up a funky yeast note, as other reviewers have noted. Reminds me of something from Hanssens actually. Pretty excellent nose.

Flavor is, again, pretty "fruit lambic"-like in terms of multi-dimensional sourness. It doesn't quite have enough complexity like a real fruited lambic/wild fermented beer would, but it's closer to many, and at times I find it hard to believe this is a kettle-soured ale. Very tart upfront with jammy raspberry preserves, a slight tangy minerality and expressive yeast in the finish. Round and wheaty with lemony lacto-acidity puckering up my palate. Malt becomes an afterthought at times and takes a backseat to the fruit, but overall this is quite a nice drinking experience.

Feel borders on medium bodied but carbonation is borderline flat for the most part, which is disappointing as I definitely like at least a bit of effervescence with this style and similar sour beers. It just kind of comes across as lifeless on the tongue, which is a shame because it's really good otherwise. I would try this again if I were assured that they did better by the beer in terms of some presentation and carbonation, but as it stands... a solid one-and-done. Damn good authentic raspberry flavor, though... I will give Toccalmatto that!

A: The beer is very hazy dark rosé in color. It poured with a narrow white ring of bubbles around the edge of the glass and some swirls on the surface.
S: Moderate aromas of raspberries are present in the nose.
T: The taste follows the smell and is dominated by flavors of raspberries. Only faint amounts of sourness are detectable.
M: It feels light-bodied on the palate and has a low to moderate amount of carbonation. The raspberries contribute a slight amount of tartness.
O: This is a pleasant beer to drink—particularly if you like raspberries—but it tastes nothing like a Berliner Weissbier and seems more like a fruit lambic. It seems like the raspberries overpower the sourness from the underlying beer.

another winner from these guys, i just wish all their beer wasnt so darn expensive! lucky enough to have this one on tap, it pours a light pink rose color without much head and just a bit of soft haze to it, no visible sediment or anything. the aroma is tart piquant raspberries and a remarkably clean lacto sourness, well drier and more straight forward than any cheesy, funky, tannic, or messy quick sours, this is bright and lightly lemony, and really mouthwatering, appearing to have the ideal amount of acidity for the style in my opinion. i really dig the taste of this, the fruit is authentic and obvious, but does not overtake the sourness or even the wheat malt with any sweetness of its own, so all elements, delicate as they are presented here, retain their full identities. so few berliners do that with two elements, and this one does it with three! furthermore, the yeast they actually fermented this with is unique too, seemingly more of a saison strain than a flavorless ale yeast, mild funk and just a clean but rustic nature there to it, also delicate. a little less carbonation than i like in the style, but not as flat as it look. dry and piquant to finish. these guys have been enormously impressive to me, and i hope their stuff keeps tricking into colorado! the italian stuff coming around lately has been absolutely sensational!

Had this at a bomb breakfast spot in Cambridge, MA. A beautiful soft rose color, clear but served cold in a glass snifter/goblet with a hazy halo of condensation. No notable head, a few wisps and bubbles. The aroma was faint, and the flavor subtle: a nice subdued sour with only a hint of fruit. It was quite light with a thin-medium body and gentle carbonation. Out server described it as "refreshing," and I must agree. I could see a four pack going quickly on a warm summer day. Recommend giving this a try!

Badly carbonated alcoholic raspberry water, that works neither as a sour nor as refreshment.

A 330ml bottle with a best before date of 1st June 2016 and poured into a Duvel tulip glass.

Appearance: It poured a slightly hazy pinkish orange colour with pretty much no head and no lacing.

Taste: This was nice. Like the aroma it starts with some tangy and tart lemon followed by raspberries. Hints of cherry and lime.

Overall: This surprised me as recently I’ve been having some pretty poor Berliner Weisse. This was so much better and was very refreshing. With no head and lacing, it was very juice like too. I would look out for this one again.