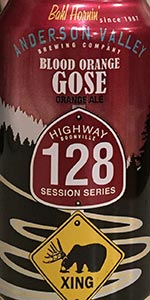 Notes: Our Blood Orange Gose is a tart, refreshing wheat ale that is kettle-soured with lactobacillus and brewed with sea salt and coriander. However, unlike traditional versions of the style, ours features liberal additions of blood oranges during fermentation. This imparts tangy citrus notes that complement the champagne-like flavors, creating a complex and sessionable ale perfect for any occasion.
View: More Beers | Place Reviews
Recent ratings and reviews. | Log in to view more ratings + sorting options.

A solid gose that is on the better side. Slightly orange color without much head. It has a strong sour taste with a noticeable bit not overwhelming orange flavor. A nice aftertaste as well.

Taste is a bit tart and sour, but not overly so. Flavors of sour blood orange, lemon zest, salt, coriander, earth minerals, saltine cracker, green grape. A bit of a white wine or champagne quality.

Overall not bad; strikes me as something that champagne-loving Europeans would drink.

Pours very lightly hazy golden yellow color with a finger of uneven white head.
Aroma is very strong of blood orange. I also get a little bit is salty wheat cracker.
There is a medium high sourness. Lots of blood orange flavor throughout finishing with a welcome pithy bitterness.
Medium bodied with good carbonation. Salt contributes nicely to the body.
Overall a delicious and refreshing Gose I would likely buy again.

A: Tawny orange pour sits three inches with a dull oatmeal color and a frumpy appearance. Lots of carbonation activity on the head surface from the pronounced carbonation effect beneath. Dirty haze factor with a small lashing of suds, weakly clinging and loosely spread.

S: Sweetness, mellow and generic but present, is the first aroma encountered, followed by citrus tartness and a mineral-y/herbal character.

T: Crisp and clean; lemon tartness; slight saltiness; the citrus character is tangy and doesn’t necessarily equate to “blood oranges” in my mind, but it is present. The slight sourness isn’t puckering as much as it is refreshing. Mildly herbal.

MF: Light and well-carbonated with a crisp, clean finish.

O: Not the most explosive of Gose-style brews I’ve tried, but definitely refreshing and clean for a low-abv sour.

Poured from a can into a Nonic pint glass.

The brew is simple but well flavored. Honey kissed malts quickly give way to citrus acidity and brine.

The brew his just so on the feel; very drinkable and refreshing.

Simplicity is often a virtue and that's the case here. A very nice gose.

Bright and tart. An enjoyable gose.

This is a pretty forgettable gose, from a brewery that makes some fantastic examples of the style.

L: Pours with a faintly reddish orange body. The color of orange blossom honey, but thin as soda. Poured into a flute, it creates three fingers of faintly orange tinted white head, which disappears entirely in less than half a minute.

S: Smells very much like AV's other goses, featuring tart notes of lemon, quince, passion fruit, tangerine and apricot, followed by a light wheat bread sweetness, with a notable yeast presence, like sourdough.

T: Flavor profile follows the nose pretty well, but I would really expect more blood orange flavor. If it wasn't on the label, I might have missed it. Usually I get something like a blackberry note from blood orange, but I only taste a hint of tart ascorbic acid to indicate the orange presence.

F: The mouthfeel is still almost perfect for a gose. Tart at first, then salty, resolving with a light bready sweetness; although something keeps the finish from being crisp. There's a crumbly edge to the finish.

O: A good gose, but these guys have made better.

L - Light amber with a decent amount of clarity and a large offwhite head that sticks around somewhat leaving behind a little bit of lacing.
S - Citrus and wheat
T - Good amount of citrus throughout along with some crisp wheat and yeast - a pinch of saltiness.
F - Medium bodied with a high amount of carbonation. Crisp.
O - a pretty solid gose with nice citrus flavor.

Reviewed from notes. Poured from a 12 oz. can into a Russian River pint glass.

A: Pours a hazy light yellow, with a good amount of visible carbonation. Forms a one-finger white head that fades fairly quickly.

T: Lactic tart and citric acid. Orange, that comes across simultaneously as juicy pulp and some Tang with a touch of St. Joseph’s Baby Aspirin. Light wheat malts, with minimal graininess in the flavor. Residual orange flavor and tart citric acid in the hang.

M: Quite a bit of carbonation in a nice light body. Low alcohol presence.

O: Pretty tasty. Nothing complex or overly different, but easy to drink.

I had Goses before, and generally like sour beers. I've never had a Leipzig Gose, according to BA, so I don't really have anything to compare this to. But I thought this beer was not pleasant, to say the least. It tasted mostly like Hawaiian Punch, with a metallic aftertaste. It seemed very odd. It was a drain pour for both me and a friend. The appearance, mouthfeel, and smell were all at least OK, but the flavor was disappointing.