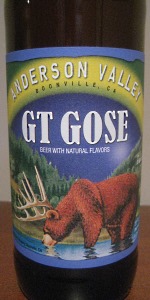 Notes: Reminiscent of a classic cocktail, our GT Gose showcases botanical flavors and aromas of lemon peel, juniper, lemongrass, and grains of paradise. With a juicy lemon-lime tartness and a slightly peppery finish, we've given the gose style a unique spin that we're sure you'll enjoy.
View: More Beers | Place Reviews
Recent ratings and reviews. | Log in to view more ratings + sorting options.
Rated: 3 by mpenske from California

A: Hazy light gold, with a couple fingers of white head that fades away by the time I’m sitting back down. Lots of visible carbonation bubbles.

S: Lemon, citric acid, and tart, with some juniper and crushed pine needles. This does smell faintly of gin. There isn’t a huge nose overall, but it’s decent for what’s there.

T: Lemony citric acid and lactic tartness up front. Again, bits of juniper and almost a minty flavor. Herbal, vegetal, and coriander. Light biscuit malts. A savory salinity in the middle and throughout the finish. Lactic acid in the finish as well with an exhale that is the reminiscent of a G&T – citrus and pine.

M: Light-bodied, and no real alcohol flavors to speak of. A good amount of carbonation sensation, though less than the appearance suggested.

O: Pretty decent, and a different flavor combination than most of the goses sitting next to it on the shelf. But ultimately not one that I think worked exceptionally well. But I think it’s an objection to the concept, rather than a failure of execution.

4.24/5  rDev +9.8%
look: 3.75 | smell: 4 | taste: 4.25 | feel: 4.5 | overall: 4.5
Had this straight after the Blood Orange on one of my Gose binges and the first thing that came to my mind was "hey, this is a standard gose" - as the Blood Orange was like a juice, a fruit soda. Now this one brings you back to the basics, where you should be at.
Traditional gose - if there is any, in this random, improvisational form of art - is very much like this, this sour, salty, sour, sour, herbs, salt, candlewax on loads of CO2. And this is something you can never get bored of. This is something new wit each and every sip, because you just simply have no idea what's it going to throw at you and in what order. This is the awesomeness of the gose. Liquid creativity. A kind of beer that can never go wrong. And would feel great on any day of the year.
May 06, 2018
Rated: 3.67 by geryeb624 from Maryland

Rated by robotnewyork from Michigan

4.25/5  rDev +10.1%
look: 4.25 | smell: 4.25 | taste: 4.25 | feel: 4.25 | overall: 4.25
Poured out of a 12 oz. can into one of my stange glasses, this beer pours a fairly cloudy/hazy light to medium gold color with a white head that's over an inc thick when first poured. Settles a few minutes after being poured to a medium sized ring lining the inside of the glass with a nice film layer of surface foam and good lacing. Aromas of pale wheat, lemony citrus, grainy salt, a hint of hay and barnyard funk, and a slight tart acidity. Tastewise, this starts out with pale wheat and grainy, beady, yeasty malt that gives way to the lemony citrus and salt notes for a sour tartness that is accompanied with a hint of barnyard funk. No discernible hop flavor here as far as my palate is concerned. Really nice balance of flavors. Has a fairly crisp, yet smooth, medium bodied mouthfeel with moderate carbonation. Has a nice, clean finish with a slightly tart and salty after taste. Very good beer here and a good representation of the style!

Reviewed by Soloviev from New York

Reviewed by Ahypercube from California

L: Love the can, and Anderson Valley's Moose Bear. Pours a lot like the Lagunitas brew mentioned earlier. Looks like a cross between soda and beer with that distinct viscosity due to the acidity. Golden orange-tinged body with white head that disperses rather quickly.

S: Lots of Brett character. Notes of Rhubarb, cranberry, white wine vinegar, lime, lemongrass, and black pepper, along with some malty notes that I didn't expect, which come across like golden delicious apples and Sourdough bread.

T: Taste is like the aroma, but sweeter and more malt-forward. Vinegar first, followed by sour lemon, lime, and rhubarb, then yogurt, which may just be my perception of how the flavor profile twists from sour to creamy, with some comforting sourdough bread with olive oil and a dash of black pepper, and a salty, briney finish, like a lime soaking in the dregs of a margarita.

F: I love the feel of sour beer. It just goes down so easy and smooth. I see why people call this a warm-weather style. I intend to drink much more of these in the future.

O: Unexpectedly, I love this just as much as the notably richer Flanders bruin I tried a few months ago. As with Eroica, it smells interesting, and somewhat appealing, but it tastes significantly better than it smells. This single can has certainly rekindled my interest in sour varieties of beer.

3.7/5  rDev -4.1%
look: 3.75 | smell: 3.75 | taste: 3.75 | feel: 3.75 | overall: 3.5
Almost clear golden color with white head. Aroma has the classic lemon/lime tartness but also other fruity and floral notes with a touch of pepper and cinnamon. Taste starts tart and lactic, continues with briney pickle juice, finishes dry and lemony. Medium minus body, medium plus carbonation. Although it has some extra ingredients, it tastes mostly like a traditional gose.
Jan 25, 2018
Rated: 3.85 by golf4collet from West Virginia

T - Follows the nose, sourness, a bit of that gin, and a trailing acidity.

3.91/5  rDev +1.3%
look: 3.75 | smell: 4 | taste: 3.75 | feel: 4.25 | overall: 4
Sunny golden with light haze and small head with tight bead
Smell is fruity citrus and subtle spice
The feel is tart with mild body medium carbonation and gentle spice with lasting tang
Taste is lemony lactic and coriander fruity spice mixture with a mild malt the lactic tang lingers long in the finish
Overall I think this is great for refreshment and is a clean but mild gose spice wise which makes it worthy of repeat tastes