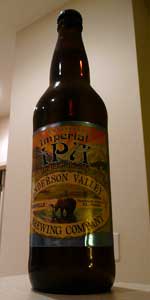 Thanks to Keith for sharing. This was surprisingly drinkable. And I dont often use this to describe hops, but they really did taste soapy. The appearance was fine, a clear light amber with a white head. While I didnt have any problem drinking this beer, I would have appreciated more bitterness, like a lot more. I could have mistaken this for some sort of imperial amber for the sweetness. The hops were very juicy, like pineapple and berry punch.

This one poured out pretty nice lookin with a golden color and a foamy white head on top. The smell of the beer had a good citrusy hop aroma to it. The taste of the beer though I thought was a little in the weak side. I was surprised by how the smell was so good but the taste just wasn't there for me. The mouthfeel was pretty crisp and light. Overall just really bummed about the taste. Other than that it was pretty good.

Pours darker copper with a moderate and dense off-white head. Floral aroma with pine, oranges, mango, and caramel. Excellent taste. Lots of grapefruit, oranges, and resin. Slight caramel malt and a buttery finish that lingers. Sticky mouthfeel. Despite the relatively low rating, I loved this beer. Its just a very basic IIPA.

A tasty, orange-y DIPA that is fairly well-balanced as hop bombs go.

Aroma is a juicy fruit / orange explosion, hints of sweet caramel and just a bit of toasty bread.

Taste is an exceedingly balanced experience, despite the predominant hop flavor. Medium bodied sweetness with a drying finish that carries an orange/citrus forward hop flavor backed by a bready malt backbone that's not quite as toasty as, say, HopDevil, but is prominent all the same.

As it warms the hops slip to the side a bit, and it's still exceedingly drinkable. One of the two bottles I've had, however, had some rising solventy alcohol notes that were a bit much.

Still, an enjoyable and repeatable experience, if for a bit of a change of pace to some of the other west coast style DIPAs around. Be sad when it's gone.

Mixed reaction...it was ok....not great. I usually like "great" when the alcohol level is this high. Pours a mostly clear orange color with a big white head. The head dissipates quickly to a ring around the glass. Leaves thick lacing in spots.

Mouthfeel seemed a bit thin at first, then more rich as the beer coated the tongue and tastebuds.

Drinkability is about average...not a bad beer but is it worth the recovery time expected for a beer close to 9 %? I'd stick with Hop Otten if I was drinking Anderson Valley beers.

Grabbed a bottle of this at Halftime in Poughkeepsie NY.

A - Amber. Amber like the mosquito at the top of John Hammonds cane in Jurassic Park. Crystal Clear with a nice sticking head and decent lacing.

S - Cantaloupe. Nothing else. Not a hint of hops. The scent is musty cantaloupe or melon.

T - Similar to the scent, very subtle cantaloupe taste. The least hop-forward DIPA I've ever had. The only thing the hops contribute to this brew is bitterness, otherwise it's not the classic 'West-Coast style' hoppy DIPA. Malty isn't the word for this. If you're looking for a malt-bomb in a DIPA, this one's for you.

M - A tad over-carbonated in my opinion. The bitterness doesn't compliment the absence of hop flavors, but it's not overwhelming. Again, the only thing you get from the hops is bitterness.

O - Glad I grabbed one if only for the fact that it affirmed what I wasn't looking for in a DIPA. It's not a bad brew, but when they highlight the "excessive amounts of malts" on the label, please notE that they aren't kidding.

If you're a malty ale fan with a touch of bitterness, this one's for you. I guess I was just assuming something coming from Mendocino, CA would be hop-forward but I was wrong. Again, not bad, but not typical for a West Coast DIPA.

A - Pours a muddied copper gold-ish color with a solid finger of near white head, decent retention, very nice lacing.

T - Citrus notes up front, strong caramel/toffee like presence. A nice sweet (not super dry) citrusy bite comes in nicely. A wee boozy at the finish, not enough to hinder the drinkability.

O - Very solid offering, much like the IPA it is a little malt forward so I dont know why I was surprised with this one. A nice malty IIPA

22 picked up by my great beer-buddy inflatablechair when he was last in Portland.. I've been saving it for about a month now... tonight is the night. Poured into my shaped Sam Adams glass while listening to Sasha's Involver mix.

Aroma is will rounded citric hops.. but without being too overdone... I could be getting a little caramel.. but my nose could be playing tricks on me.

Flavor mirrors the aroma.. but with a background fruity hoppiness.. Amarillos? Big bitterness is balanced nicely with a light toasty malty body.. could use a little bit more pronounced hop flavor with maybe dialing down the bitterness a notch.. Bitterness cuts down on the drinkabilty for me.. but I am not going to cut it for that.. maybe tonight my palate wasn't ready. Mouthfeel is pretty much perfect for an IPA.. good viscosity and just enough carbonation.

All and all... I would buy this for sure if it was in Boise... I would probably buy it alot.. but alas, my bottle came from Portland.. Thanks Sam!!

T-Missing some malt presence, but lots of bitterness and some earthy notes make up for it.

O- For a DIPA this is disappointing. It is lacking the citrus and floral notes, and the balance isn't there. But at the end of the day I always love a good hop bomb so there is salvation there.

A-Bright orange tinted copper with a thin off-white head that reduces to a thin veil and leaves minimal lace.

S-Sweet caramel malt with a light touch of orange and bit of floralness.

T-Pine and floral hop notes in balance with a solid caramel malt base. Relatively simple and straight forward but nonetheless tasty. Bit of a spicy bite in the drying finish.

D-A decent DIPA but the age has hurt this one as the hops have faded somewhat. Easy drinking and still fairly balanced but not very exciting.

Poured from a 22oz bottle into an imperial pint glass.

A: The beer is a bright orange/amber color with a large off-white head that fades slowly and leaves a thick lace on the glass.

S: The aroma is a good blend of fruity citrus, floral hops and caramelized malts.

T: The taste is fruity and sweet up front with a strong citrus flavor and some caramel in the background. Then a strong hops bitterness comes in along with an alcohol bite. The malt character is on the thin side for the style despite the sweetness. The after-taste is slightly sweet and slightly hoppy.

D: Tasty, goes down easily, not too filling, good kick, decent representation of style, it's a good beer but there are definitely several other 2IPA's that I would choose first.

Pours a clear light orange with a 2 puffy inch whitish-orange head that settles to a thin cap. Foamy swaths of lace line the glass on the drink down. Smell is of grapefruit and some pineapple, citrus zest, and malt aromas. Taste is of grapefruit/citrus fruits, citrus zest, and a malty brown sugar finish. The bitterness on this one is fairly mild but sticks around on the palate after each sip. This beer is crisp and slightly sticky in the mouth. Overall, this is a very good DIPA with a nice balance between the hops and a nice brown sugar malty flavor. Almost like a very hoppy barleywine in my opinion.

I had numerous drafts of this at the Amsterdam Ale House on Manhattan's upper west side. This is a great example of how west coast ipas are different, and in my opinion better, than east coast.

Appearance is a hazy orange. A lot of carbonation and a fluffy head that stuck around for a while and left some lacing behind.

Aroma was of strong hops, mostly citrus, with a malt backbone to back it up. Overall a very strong aroma.

Flavor was a little on the hoppy side but generally very well balanced and not too strong tasting at all.

Overall I liked this beer a lot and was sorry to see it go when the tap was eventually replace by another double ipa.