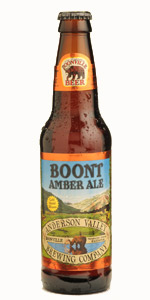 Poured well - nice head. Supreme deep orangey-copper-amber color, looks great and healthy. Both malt and hops in the nose, but neither overwhelming. Lovely balance of caramel malt, hops and a lovely fruitiness that adds drinkability to this beer - like an engine adds movement to a car. Some light sweetness at first that makes way for a light malt, bitter dry finish. Solid mouthfeel, that leaves a light mouth puckering begging to be quelled by the next mouthful of beer, making this a very drinkable beer. This is now the 4th, or 5th, beer that I have had from Anderson Valley, and they are quickly developing great respect from me, for the excellent high quality range of beers they produce. They seem to do no wrong. No wonder these beers win awards, they must be truly brewed by a Drinker.

L: Clear amber with a sticky, creamy beige head with excellent retention and some clinging lacing.

T: Tons of sticky-sweet caramel, toasted bread, toffee, turns buttery/butterscotch on the finish, balances out with a touch of earth and pine, and then finishes mostly clean, with some lingering caramel sweetness.

F: Medium-bodied, moderate carbonation, slick and slightly oily from the sugars and hops.

Given that I'm not a fan of the hop bombs, when I drink an ale I'm looking for something than leans toward the lager end of the scale, and ambers generally do the trick. Boont surprised me with its complexity; not just the expected caramel but a slightly sweet nuttiness. At the same time, this has more of a hoppy bite than, say, New Belgium amber, without traveling anywhere near the grapefruit-juice-clone contest of the (primarily) west coast IPAs—and I'm from California.

The name is essentially a Looney Tunes sound effect. Ignore that and enjoy the beer.

A- Light brown color, semi-transparent, one finger thick fluffy cream color head that faded slowly to a thin cover, some bubbles rising throughout

I really liked this amber ale. It is very well balanced between the malt and hops.

Presented on-tap in pint glass. Appearance is a coppery color with a thin creamy off-white head. Nice amount of lace left in glass.

Taste: started with a sweet caramel malt flavor that gave way to to a fruity hops taste. Finished with a citrusy hops kick and a slight hoppy bitter aftertaste.

Drinkability: a little bit better than average. This beer really didn't stand out in my mind (or palate) as much above the norm for the style. Not much distinguished it from the rest. A decent brew overall.

Pours a deep clear amber with a off white head that is feed by lots of rising bubbles. Smells of sweet malt and citrus hops a little light in aroma. Tastes of crystal malt you get the carmel flavor along with sweet malt with a touch of hop flavor with a light hop bite. Mouthfeel is medium a good drinkable little amber ale. Not one of the best but not a bad little sessions brew.

Caramel malts highlighted and well balanced with herbal, floral, very faint citrus hops in both the aroma and taste.

A well done amber ale. The hop profile is balanced, and really highlights the malts.

A bit too bitter fir my taste. Was expecting something a little lighter.

This beer poured amber in color, as the name says. Smell is citrus and bitterness. Taste brings about more complexity than I would expect from an amber ale. Really floral at the front. A mix of oranges and flowers hits my tongue. The middle is slightly sweeter with some bread-like flavor and other nondescript sweetness coming in. The finish is bittersweet and dry and also quite crisp. Yeast and alcohol are noticeable here. This one is good, but seems to have too much going on. Not bad though.

I've never been a huge fan of Anderson Valley Brewing Company. Their beers are always just OK. I did grab a 12-pack around December when they went on sale at Total Wine & More, but they are just decent. Beers like this are a good way to introduce someone to craft beer. I actually didn't plan on this beer being in the sampler pack that I bought, so we lucked out. It was on sale for $6.99 from $12.99, so even if the the beers are bad, I figured I would get them anyway! The IPA was also in there, and it's a good daily drinking IPA.

Until we started reviewing this beer, I had no idea where Anderson Valley Brewing Company was. Cool story about the small town and their language. I would love to meet someone from there just to see how they talk. Fun! Hopefully the beer is good, and I am looking forward to reviewing it. Bottoms up, people!

In the Glass: I could smell this as I was pouring it. The last time I had this, I just drank it from the bottle. I know, I know… I do NOT recommend ANYONE drink ANY beer from a bottle. Grab a cup, even if it's a red Solo cup, and drink from a glass. So I am sure I will enjoy this more in a glass. In the glass, it has a nice dark tan color, with a VERY thick and frothy head. I also didn't realize that the brewery was solar powered. It says that on the cap, anyway.

Nose: As I was pouring, I could smell the malty goodness. When I stick my nose in the glass, it has a nice rich caramel aroma and a lovely malty finish. A second whiff I am picking up some nice sugary aromas. This beer has a lot of promise.

Flavor: Considering my experience with Anderson Valley beers, I didn't have a lot of expectations with this one. Also, not usually a fan of amber ales. But this one isn't bad. At first, there is a rich copper flavor. Imagine licking a penny. Then it mellows out, and provides a nice malty flavor that lingers on the back of the tongue. There is a nice little hint of hops toward the back of the palate, but that's it. For a guy that likes hops, I am impressed that I like the flavor so much.

Mouthfeel: While I am thinking about it, why does the bear on the label (and on the Anderson Valley website) have horns? Do bears in northern California have horns? Anyway, the mouthfeel is nice, and actually changes as you drink the beer. At first, a ton of bubbles hit the front of the palate then it settles to a nice malty flavor at the back of the palate. A subtle dryness creeps in, and then settles to a smooth finish. I would say the aftertaste is the best part of this beer.

Aftertaste: This is nice. It starts with a rich copper flavor, then as you swallow the malty flavors lessen and you are still hit with the malty flavors. The hops really come out in the end. The aftertaste lasts for a few minutes, too.

Anderson Valley has a lot of beers in their portfolio. From their Winter and Summer Solstice to their Oatmeal Stout and IPA, they have a wide range of flavors. Out of the ones I have had, the Boont Amber Ale is nice. If you haven't had the Winter Solstice, grab one next year. It's one of the better holiday beers.

Boont Amber Ale - The bottle says: "Deep copper with a creamy light tan head. Rich aroma of caramel and a sun-toasted grain elegantly meshed with a mellow noble hop aroma. A full-bodied malt flavor is supported by a refreshing mild hop bitterness with herbal hoppy aromas - lending itself to a long, clean finish."