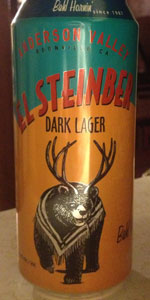 Notes: Midnight Wheat malt gives this complex lager its dark brown color while additions of roasted Indio-Hispano® blue corn create both a lighter body and unique, toasty flavor. German Pilsner malt and Saaz hops round out this dark lager producing a crisp, clean finish and smooth drinkability that is perfect for any occasion.
View: Beers | Place Reviews
Reviews: 45 | Ratings: 165 | Log in to view all ratings and sort
Reviews by JohnnyK:

Pours a clear dark copper with a foamy dark khaki head that settles to a partial film on top of the beer. Small dots of lace form around the glass on the drink down. Smell is of toasted malt, char, and slight nutty aromas. Taste is much the same with toast and slight metallic flavors on the finish. There is a mild amount of roasty bitterness on the palate with each sip. This beer has a lower level of carbonation with a slightly crisp mouthfeel. Overall, this is a pretty poor beer with a metallic flavor that lingers in the mouth and is quite unpleasant.

I picked up a can of Anderson Valley's El Steinber Dark Lager last week for $2.59 at The Lager Mill. Anderson Valley seems to be a pretty solid brewery so I decided to give their Dark Lager a try, i'm in the mood for something dark, but not strong and this seems like a good choice, so lets see how it goes. No visible canning date, but it just showed up so I think it's fairly fresh. Poured from a 16oz can into an imperial pint glass.

A- The can looks pretty good, what's not to like about a bear with antlers wearing a poncho, it's fairly eye catching. It poured a nice and fairly clear darker brown color that took on some ruby/mahogany like colors when held to the light with three fingers worth of tan head that died down to a thin ring that stayed till the end and left some nice lacing behind. This was a good looking beer that looked fairly true to style.

S- The aroma starts off with a slightly higher amount of medium sweetness with a good amount of malts that have a pretty grainy aroma to them along with some caramel and lightly roasted aromas. Up next comes a lighter nutty aroma with a slight metallic aromas towards the end. The aroma was just ok, I thought it was a little bland and it could have been just a little more complex.

T- The taste seems to somewhat like the aroma but not as bland, it starts off with a lower amount of sweetness followed by a good amount of malts that impart a grainy, caramel malt, and a medium roasted flavor that was a little on the lighter side and it stuck out nicely. Up next comes a slight chocolate, nutty and smokey flavor that adds a little complexity and it's followed by some earthy hops that impart a lighter amount of medium bitterness with a roasty and malty aftertaste. This was a pretty nice tasting beer, that was fairly true to style.

M- Pretty smooth, clean, fairly crisp, on the thicker side of being lighter bodied, with a good amount of medium carbonation. The mouthfeel was pretty good, it worked well with this beer.

Overall I thought this was a nice beer and a good example of the style, it had some nice roasty flavors with some crisp and clean lager flavors, it fulfilled my craving for this style. This beer had pretty good drinkability, it was pretty smooth, crisp, clean, and the flavors did a nice job at holding my attention, I could drink a few of these on a cool summer night, I think it's fairly sessionable. What I liked the most about this beer was the appearance and the mouthfeel, they were pretty good and the taste was pretty nice also, it's pretty much what I want from the style. What I liked the least about this beer was the aroma, it was pretty bland and it didn't get me too excited to drink this beer, I think the aroma could use a little work. I would buy this beer again when in the mood for a Black Lager, it's got just about everything that I look for in the style and I would recommend it to anyone who likes the style and it might make a for good introduction to dark beers. All in all i was pretty happy with this beer, it really hit the spot on this warm spring night and I know I will be drinking a few more of these this summer, good job guys this is one solid beer.

El Steinber, for what it's worth, is a spot-on American craft version of a Euro Dark Lager that's not in a green bottle. It nails the taste of the Euro imports I've had, from the nice maltiness, right down to a slight metallic aftertaste. It'd be better if they lost that characteristic aftertaste, but it's still a good beer that's highly drinkable.

5.5% according to my can's label. 16 fl oz orange and blue aluminum can acquired a few days ago at a local SoCal beer store and served into a conical Samuel Smith's pint glass in me gaff in low altitude Los Feliz, Los Angeles, California. Reviewed live. Expectations are above average given the brewery.

Served cold, straight from the fridge. Side-poured with standard vigor as no carbonation issues are anticipated.

A: Pours a four finger grey-white (ecru for the pretentious) colour head of decent cream and thickness and good (~4+) minute retention. Body colour is a clear translucent dark amber. No yeast particles are visible. No bubble show. Lacing is thin and inconsistent. Not unique or special, but generally appealing for the style.

Dr: A surprisingly mediocre dark lager from an otherwise solid brewery. This forgettable brew should be left on the shelf. Drinkable but pedestrian. Anderson Valley is capable of far better.

16oz can poured into chilled glass. The color is a medium brown with a foamy beige head. The aroma has a nice malt smell to it. The texture is ok with a heavy malt taste. I didn't know what to expect from this beer but the taste was pretty unique. Not really a fan of the overall flavor but I'm sure others would like it.

pours a really nice clear brown with a deep redness. thick head with a good bit of nice lacing. smell has a slight caramel to it, with a little maltiness. taste is all malt with a little hoppiness. comes across pretty light for such a dark brew. over all this is a pretty solid beer. i definitely wouldnt be opposed to trying more beers from anderson valley.

Was hoping this would be more like a Vienna lager, Munich dunkel, or Czech cerny, instead it's a dark brown, lightly corn flavored beer. While very similar to the summer and winter solstice beers, without the spice there's nothing to keep it interesting or even worth another sip.