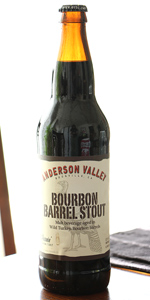 Notes: Aged for three months in Wild Turkey® Bourbon barrels, this luxurious stout has a deep ebony hue and a beautiful mahogany head. The woody, vanilla-like notes imparted by the barrels mingle with aromas of fresh baked bread, toffee, and espresso and envelop the rich chocolate and roasted barley flavors with a fine bourbon character.
View: Beers | Place Reviews
Reviews: 288 | Ratings: 1,691 | Log in to view all ratings and sort
Reviews by Keepnitrl:

In a glass from the bottle. Pours dark brown, a perfectly fine looking stout, though head dissipates fast. Smell is mild, mainly bourbon. Taste of Wild Turkey largely overpowers the Stout. Not that the taste is very strong for a barrel aged stout, but such taste as the beer offers is an astringent mix of bourbon and something medicinal. Thin mouthfeel. I love plenty of barrel aged stouts, but this one was hard to drink. Shared with a few fiends who all had the same response. Reading other reviews, I wonder if ours was an off batch.

Dark brown color with mocha head. Aroma had nice toffee, butterscotch and dried dates with a light fruit acidity. Taste follows with toffee and dried fruits, really well integrated but it fades towards the finish and doesn't linger too much. Medium to light body, medium carbonation. Really nice aroma but the low ABV doesn't support the flavor too well and overall feels kind of watery.

The ever-classy Barney Flats gets a serious renovation! Without sacrificing the character of the original, it draws in key components from the Wild Turkey bourbon barrels that complement it perfectly!

With a dark, bark brown hue, the beer evades black coloration but only barely. Capped with a delicate lining of espresso-like creme, the beer takes on a stately cask ale-like appearance. Good retention and light brandy legging reaffirm the notions of quality even to the eye.

The aromas of chocolate, heavy toast, medium roast coffee, and heavy cream rise much in the same way as the original Barney Flats, but as the nose becomes accustomed to the scent, the warming beer invites aromas of coconut, vanilla, cherry alcohol, weathered oak, and unmistakable bourbon to act in complement.

The bittersweet chocolate, toasty-roasty coffee flavors stem from aroma with a consistent feed. But the beer seems wrapped in an envelope of soft bourbon taste without the burn. Vanilla, caramel, coconut, charred oak, and mild dark fruit give the beer a sultry elegance that really sets it apart. It seems that the early palate doesn't register the taste nearly as well as it resonates in finish.

Creamy and delightful, the beer's early marshmallow textures morph into a lush velvety texture of warmth and brandyish sweetness. Light wood tanning creates a powdery sensation that balances the sweetness in conjunction with the broad woody bitterness from hops.

The beer simply exudes class- both from the stout and bourbon standpoints. This new Barney Flats variation is much more than a bourbon barrel aged beer, its a collaboration of taste that dovetail together perfectly!

Consumed on draft on August 8th, 2015 at Grapes and Hops in Ventura, CA.

Aroma is all whiskey.

Flavor is also almost all whiskey, but some weak dark malts and minimal bitterness also put in a token appearance. Acceptable and even a little fun on the palate.

Mouthfeel is thick and thin at the same time. Interesting trick. It's neither as chewy as the best imperial stouts nor as thin as the flavor implies. Very low level of carbonation.

Certainly not a bad beer, but a bigger beer in body, flavor and ABV is needed to stand up to the bourbon barrels.

Pours jet black with a one-finger tan creamy head. Smells of vanilla bean. A medium bodied stout. Tastes of coffee and hops with the bourbon and wild turkey showing up late. Very balanced and smooth, not overbearing which would allow for multiple tastings.

A: Midnight black with some red at the bottom. Tan 2 finger head. Great lacing.

S: Vanilla, caramel. I could smell it from an arm's length away while pouring. Magnificent!

T: Vanilla, caramel, bourbon dominate. Very slight char is there too as well as milk chocolate.

M: Creamy smooth. A bit watery but the ABV is very low for a BB stout, so whatever.

O: This was my first BB stout. I'm an addict now because of this one. The vanilla, caramel, and bourbon are strong. It is surprisingly complex. The ABV is low, but there is always Huge Arker for something heavier in the mouth.

On-tap served in a pint glass at O'glee, Bangkok.

Black in color with thick silky khaki head, it stands with very good retention before slowly sinking to an eternal fluffy crown that won't die down until the last sip and leaving plenty of sticky lacing along the way.

In a nose, chocolate, espresso, roasted, dark bread, toasted biscuit, and caramel toffee, all of these aromas are derived from its malty goodness while bourbon barrel yields notes of vanilla, woody, and slight spicy.

Medium body with low carbonation but it is proper to carry all the things well under the smooth mouthfeel and medium crisp palate, finish is very dry.

This one is indeed a good Stout with the proper amount of bourbon barrel character to add more depth and complexity. The bourbon barrel profile is harmoniously presented in not so intense fashion, good for ones who want to start enjoying the barrel-aged Stout.

Poured into a Fremont small snifter. Pours a very dark mahogany brown with little light transmission in the glass, and a thin, light brown head that dissipates to patches with slight lacing. Aroma of mild, sweet toasted malt, vanilla, bourbon, hints of barrel oak. Flavor follows aroma, with light toasted malt, bourbon, vanilla, hint of lactose; finishes with lingering bourbon and mild wood. Medium bodied with light carbonation. Perhaps my first relatively low ABV whiskey barreled stout, and it seems clear that a lighter stout is somewhat overwhelmed by the whiskey character. This is actually well balanced and the vanilla stout character is nicely done, but the whiskey masks it, making this somewhat one-note. The vanilla flavor is a big asset to balance the whiskey. I love whiskey/bourbon beers of all kinds and greatly enjoyed this, but would like to see Anderson Valley beef up the malt body a bit. Delivers what it promises and enjoyed to the last drop.

Beer decanted black as night into my Spiegelau stout glass with a nice brown head. Nice sealing of the jar by the Quickie Mart owners.

Nose had nice barrel characteristics as it warm. There was a nice touch of bourbon there along with mild roasted malts.

Taste was pretty good. With 3 months in the barrel one gets some light touches of booze, vanilla, and oak over a mild roasted malt base. Hopping is lacking as this is sweeter despite a smaller abv for this style of beer.

Mouthfeel was light but smooth due to the moderate abv. Beer really lacked that extra oomph that we are conditioned with imperial styles that are barrel aged.

Overall not a great or a very good beer but one that offered some interesting flavors. With a better base beer a barrel aged export stout concept would work better.

Smells of chocolate, coconut and vanilla. Mild whiskey aroma but it is more made of the parts of whiskey scent rather than the whiskey itself.

Frothy, beige head that leaves ample webs of lace. Slow to recede. Near black color--a bit of light passes on the base of the glass.

Slightly sweet aroma with a definitive whiskey touch. The smell does not have an alcohol nose. Good chocolate notes.

Rich and chocolatey. Starts off innocently, but there's a strong fudge kick in the swallow. The aftertaste reminds me of an after dinner chocolate. i do not taste the whiskey I smelled earlier. The body is thick and the carbonation low. It's a bit like drinking a carbonated, chilled hot cocoa.

Poured from the 22 oz. bottle into a Samuel Smith English tulip pint.

a: Opaque black with a tro inch tall tan head which receded slowly to thick even surface foam and dense lacing.

m: Rather light for a stout and considering its dense black visual.

o At first not quite as bourbon dominated as the aroma and initial taste suggested. Easy drinking. The light mouthfeel at first distracts a bit from the drinking experience, but the persistent bourbon flavor grows more enjoyable to the point you don't mind iof the mouthfeel is light.

On tap at Brews Brothers. Mild aroma of chocolate and bourbon. Nice dark color. Has a slightly carbonated taste similar to Coke. Can tell it is wild turkey. Really has that alcohol taste. All right beer. Prefer some of the barrel aged beers in the great lakes region more.

I was expecting way more for a BA stout. The look and sort of smell were there but taste and feel were not.

Nose: Straight bourbon right away, which fades to coconut, vanilla, toast, and chocolate.

Taste: Some bitterness up front. Light mouthfeel for a stout. Carbonation is well balanced but watered down. Light vanilla, and toffee with a very faint hint of alcohol hotness at the end.