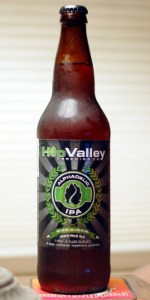 Reviewed by timon from California

3.91/5  rDev +1.8%
look: 3.75 | smell: 4 | taste: 3.75 | feel: 4.25 | overall: 4
Look is nothing too interesting. Has some small head, some lacing, and a cloudy golden color that resolves itself to a standard beer color for the IPA style. Honey, hops, and light tropical fruits dominate the smell. The mouthfeel is light with a syrupy quality, though. The taste is not quite as good as the smell or mouthfeel. It's just a bit one dimensional in its maltiness--the hops, as the head shows, are now that strong here. Overall, not bad for the price. You get what you pay for.
Mar 01, 2021

3.79/5  rDev -1.3%
look: 4 | smell: 3.75 | taste: 3.75 | feel: 4 | overall: 3.75
Look: Almost clear burnt orange with a lively pure white head that forms and settles to a nice lid, leaving good lacing behind
Aroma: Sweet orange, pomelo, mixed berries, some pine, and bready and slightly sweet malt
Taste: A huge citrus fruit punch hits hard and fast and is followed by a strong, resinous hop flower note along with some pine sap. Bready malt holds the backbone but lets the hops shine and finishes with very strong pine and lightly citrus hop bite
Mouthfeel: Full, a little slick, medium-high carbonation, and quite dry on the finish
Overall: I dig it. This beer is, has been, and hopefully always will be exactly what it started out as – a throwback West Coast IPA. All the pine/citrus hops, a good malt base, and strong bite and dryness on the finish. One of my go-to’s when I want classic WCIPA hop goodness and high bitterness/dryness for a reasonable price

Beer poured golden orange with a beautiful white head that has some great hang time.

Nose is subdued with hints of citrus and stone fruits.

Taste is set up by a sweet but not cloying medium pale malt base that has a generous hopping tinged with orange, grapefruit, and peach. Finishes with a pleasant bitterness; 7/10 on my scale.

Mouthfeel is medium bodied and fairly refreshing and smooth.

Overall this beer takes me back to how IPA's were 7-10 years ago with the residual sugar offset by ample hopping; in this case 90 IBU's. Likable beer that is budget friendly.

3.59/5  rDev -6.5%
look: 3.75 | smell: 3.5 | taste: 3.5 | feel: 3.75 | overall: 3.75
i wanted to like this way more than i did, fresh on tap too, should have been at its best, but its a relatively lackluster ipa, if the alpha in the name is meant to suggest alpha acid bitterness, they got it right, because this one seems to be way more hop bitterness than hop flavor, a little generic in terms of taste but cranked way up on the finishing bite. the quality is there though, which i suppose is important in a beer thats not all that interesting, hard to be too negative, but it seems like these guys have a couple too many ipa types in the market right now, and that they could easily cull the weak ones and be just fine, or even better off for it. the pour is pretty, clear golden and tall white headed, a real good looking pint, bubbly and active and clean. aroma and flavor are mirrored, some light pine and citrus pith, but its uninteresting and overly familiar, not really holding my attention until the highly bitter finish just sort of demands it. its got a slight peppery thing to the hops, and really does pack a punch. it has some malt flavor and body pushing sweet,but the hops are intense enough at the end to make it almost brisk in feel, especially with the nice carbonation. if you want a somewhat one dimensional ipa thats not too heavy to drink on and is decidedly the opposite of the trendy dry hop stuff, you may dig this, but in the lineup of hop valley beers, this one is a little bit lost for me. good by all measures, but generic, simple, and more bitter than flavorful as the hops go...
May 21, 2019
Rated: 3.62 by antihero404 from California

Reviewed by Captdolfinpain from Oregon

L - Mostly clear, light amber. There's a slight haze to it, but only enough to give it some character. Half an inch or so pure white head, with short lived retention.
S - It smells pretty good, I get some fruity and piney overtones, less pronounced floral aromas (specifically roses?), with milder (but still noticeable) malty notes.
T - It tastes about like it smells; predominantly pine resin and fruit. In particular it reminds me of fresh apricot. The floral rose flavor comes through more and balances the tart apricot/fruit tones. The full bodied malt flavor rounds out the aromatic fruit/floral components nicely, without completely stealing the show.
F - This is a really refreshing beer. It's light-medium bodied, not oily feeling at all. Slightly astringent, but in just the right way as to keep your mouth from feeling slimy after a swig.
O - If you're looking for an easy drinking IPA with a fun aromatic hops profile, then this is a great choice. It's an awesome brew to have in the cooler for a summer BBQ.

3.84/5  rDev 0%
look: 3.75 | smell: 4 | taste: 3.75 | feel: 4 | overall: 3.75
Poured from bottle into a pint glass
Appearance – The beer pours a hazy orange amber color with a one finger head of white foam. The head fades very fast to leave a light level of foamy lace on the sides of the glass.
Smell – The aroma of the brew is strongest of a bready and pine hop aroma that has a good deal of citrus hop and a bit of tropical fruit. Along with these smells comes some aromas an herbal smell as well.
Taste – The taste begins with a bready flavor that is mixed with a rather dank pine and herbal taste. As the taste advances the bready takes on more grainy notes all while the dank grows stronger and is joined by some flavors of citrus hop and a bit of yeast. Toward the end some tastes of a floral and grassy hop join the flavor profile to leave one with a rather dank and malty taste to linger on the tongue.
Mouthfeel –The body of the brew is on the moderate to slightly thicker side for an IPA of 7.2 % with a carbonation level that is rather moderate. Overall for the dank and bready tastes, the feel is rather well done and creates a medium that is fantastic for the flavors.
Overall – This is a rather nice dank and robust drinker. Flavorful, robust, and a great drinking brew.

Reviewed by UWDAWG from Washington

Reviewed by tomengdahl from Washington

Reviewed by Jetlag767 from Minnesota

My first from this brewery.
They need to make better cans.