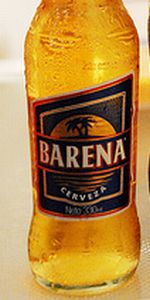 Recently spent a week in Roatan and drank a lot of the 4 Honduran beers on the island in the hot sun. They were quite refreshing given the weather and suited their purpose perfectly, ie: quenching thirst. I'll review all 4 at once, from what I can remember, so anyone looking to try these when they visit can have an idea of what's in store.

All were drank straight from the bottle.

Barena - This was the worst of the bunch in my opinion. Heavy aroma and flavor of DMS. It's pretty much overpowering and you can't taste anything else. Comes in a clear glass bottle so, although mine wasn't, could be easily light struck. Very clear diluted yellow in color with a bright white head that didn't last at all with each sip. Tried it once and never had it again.

Port Royal - This was possibly the cleanest of all the beers. But that also meant that it had very little flavor to speak of. Very crisp, easy to drink (fast) and thirst quenching...but aside from a little DMS in the after taste had very little going on. Came in a green glass bottle and was very clear.

Imperial - This one came in a brown bottle so that was a nice change. Not so loaded with DMS to turn me away in flavor in aroma. Had a little more body than the first 2 and little more going on in flavor...there may have been a little malt used in there after all.

Salva Vida - This quickly became my go-to beer on the island. It came in a brown bottle and had good head retention everytime the bottle was tipped to sip. Never took it out of the bottle except to drink but it looked very clear in the bottle with a white big carbonation head. Slight DMS in the taste and aroma. It had some mroe going on though...You could actually tell they used hops in the beer (although still not very prevelent) and there was a little malt in there too.

All in all they are 4 similar beers brewed by the same brewery. Not the best beer to drink but they serve the purpose when it's 85 and sunny and you've been at the beach all day and need a thirst quencher while sitting on the porch in the evening. I'd recommend trying them all for yourself but Salva is the winner in my book.

On a side note. I learned that some rich guy went over to Roatan and actually built a brewery. He planned to brew beer for the island, and I believe tried to, but was quickly run out of the business by the big wigs. I guess they went to all the businesses on the island and paid them NOT to sell his beer and continue to sell these 4 as the only local beers on the island. He tried to sell the brewery but was unsuccessful and he now makes soda with the equipment.

Was not expecting much from this. Figured it would be a typical tasting "tropical" beer like a Sol or Landshark, except worse. The first taste was amazing. It had a tropical sweetness and good amount of carbonation. It was great for like 3 swigs then it just got too sweet and funky. Give it a try but dont expect much

Trip to Utila - Honduras - stayed at Utopia - a must snorkel / dive all inclusive - the best ever!
They secured some Jamaican made Export Guinness 7.5% for us, and we made black & Tans that were both refreshing and lighter with lagers like Barena 4.6%.

A: Pours a crystal clear light golden yellow in body with huge amounts of visible carbonation with a 1.5 finger tall bright white meringue head that lasts and laces - very sudsy. Significant amounts of lacing are observed all the way down. It's a 4 for looks.

T: Follows smell but more ample. it's sweet, light, brassy, but fresh and dry finishing due to grassy hops.

M: Soda like body. ie heavier due to corn sweetness and heavy amounts of carbonation. Crisp and refreshing.

O: Much better than any American mass adjunct brands. It's great beer for the beach and swimming.

Watery light golden body with a thin white cap. Macro sweet corn to the face, with sweet malts and some booze. Taste isn't much better, watery malt with some skunkiness. Feel is watery, skunky, and light.

Poured from 12oz clear bottle into a pint glass.

Appearance: medium golden hue with no haze and a strong effervescence. Head is a finger of pillowy white foam with decent retention. Actually not bad for the style.

Smell: sweet and malty with relatively low adjunct character. There also appears to be an element of noble hops present; for the style, I can't complain too much. I'm also quite impressed with the lack of skunkiness, especially coming from a clear bottle.

Taste: a bit too sweet, with a little graininess. That said, it's relatively free of off-flavors and even demonstrates a little bit of hops. I'm quite pleasantly surprised.

Mouthfeel: light body with a big fizziness and a large but ephemeral creaminess. Good.

Overall: this might be the best-tasting, most refreshing mass-produced adjunct lager I've ever had. What's with all the hate?! It's drinkable as hell. If I could find this stuff around consistently, it would be my #1 tailgating beer.