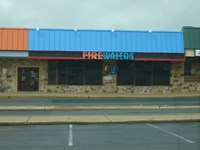 View: Place Reviews
Reviews: 3 | Ratings: 6 | Log in to view all ratings and sort

I finally made it here the other night while out with the wife. The interior of this particular Firewaters just doesn't do it for me. It seems like they started back around the small upper bar and then just grabbed whatever they found lying around and filled the rest of the place up. I wasn't quite sure what they were going for. Anyway, The place was fairly empty for an early Saturday night (8:30ish) maybe another dozen or so people were in there with us. The two bartenders working were both friendly and eager to help although their knowledge of the beers was lacking...but I've come to expect that from Firewaters. The first beer I ordered was a Troegs Troegenator. The bartender asked "Which one? We have a regular Troegenator and a Hopback Troegenator." Really? Anyway, the beer was fresh and tasty as was the Victory Wild Devil I also had. The had the standard 50 taps, but the bottles selection was lacking from what I could see. Even so, for Delaware, the selection rocked. Stone, Troegs, Victory, DFH, Twin Lakes, Great Divide and others all on the wall. They had some really good deals posted, as well....All pints $2 on Tuesdays and half off your total drink bill on Sundays. I'll be back again...

Attention all Northern DE BeerAdvocates: You need to check out this bar!

This bar boasts 50 taps and 75+ bottles available at any time. About 35 of the taps and most bottles are from US micros, including local favourites Dogfish Head, Victory, Twin Lakes, as well as familiar faves Stone, Troegs, Brooklyn. Import taps of note include Franziskaner Hefeweizen and Lindemans Framboise.

The bar is nice and dark (useful when you look like me), with an electronic jukebox providing the music. The long bar has room for ~12 people, which is all there was when I visited on a Monday night. The two young bartenders were quite attentive and willing to learn about their beers.

So, why do I insist that all Wilmington-area BAs visit Firewaters? Because I'm afraid that with the bar's low volume of customers, it will close, which would be a shame. This bar may be out of the way, but the tap and bottle list is absolutely worth the trip.

Firewaters in Newark, DE is a dark place w/a long granite top beer bar on your left and a separate octagonal martini bar to the right. The bartender was a sweet young brunette in tight, low cut blue jeans and a black boostier. She's friendly and attentive although not too familiar with the vast beer selection. Understandable, given that she looks barely legal and the place has only been open for a couple of weeks. At least she knew enough to ask whether I wanted a chilled glass or not.

The place is a good size with one very large HD TV on one side and several smaller flatscreens on the other. On the Wednesday night that I stopped in the place was practically empty. The bartender informed me that their biggest weekday crowd usually shows up during happy hour (4-7pm) for the specials.

There are 50 taps that are loosely organized by Lagers/Pilsners (Victory Prima Pils, Twin Lakes Rt. 52 Pils), Ales (DFH 60 Min, Stone IPA & Arrogant Bastard), Wheats (Paulaner, Brooklyn), Seasonals (Southampton Double White, DFH Indian Brown, Great Divide Yeti) and then the Everything Else category (Lancaster Milk Stout, Stone Double Bastard, Anchor Steam, Troegs Troegenator & Flying Dog Gonzo to name a few). In addition, there are about 100 bottled beers that includes a dozen and a half macros with the rest being a pretty good selection of craft beers and imports. I was pleasantly surprised to find one of Harpoon's 100 barrel series beers on the list and left with a bottle to take home.

Firewaters is definitely a place with potential and I'd love to come back on a Friday or Saturday night. My only complaint, on this weekday night, was that the music was a really lame mix of doo wop, top 40 and dance music from the 70's, and an occasional country song for good measure.

As for food, I ordered some wings off the Hooters menu, which is next store and shares the same kitchen. I ordered the wings with the 3 mile island hot sauce (one step down from the 911 sauce) and I couldn't feel my lips for a while after I finished them. Luckily I could still taste the bitter hops in my pint of Victory Hop Devil.

Overall, a good place to visit for a beer or two and just off I-95 on your way through Delaware.

Firewaters Beer Bar & Martini in Newark, DE
Place rating: 4.03 out of 5 with 6 ratings