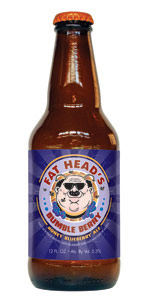 Usually not a fruity beer lover, but this beer had the unique quality of not overpowering the taste of beer. Subtle taste and smell of Blue Berry. If i wanted a Berry soda, I would have bought a berry soda. This is truly a Beery Good Beer

I love fatheads so after years of head hunter, hop juju, hop stalker, and all their other world class beers I felt I owed it to them to try this completely unappealing beer.

Having said that, it's okay for a novelty beer, but far from anything I'd drink again given most other choices.

It tastes like a watered down sierra nevada pale ale fucked a blueberry pancake. Tell me I'm a wrong.

Big fan of this stuff. Gorgeous aroma that smells of fresh blueberry and honeyed wheat. Very pleasant color and solid mouth feel. Taste is extremely pleasant while also not being over the top. Great for the summer or days on the water.

On tap at Max and Erma's with my parents. The only "craft" beer on tap. A good average drinkable beer. Came with frozen blueberries in glass. Not much else about this beer that's remarkable. Honey is noticeable. Blueberry flavor is subtle.

This one pours a clear light amber color, with a small head, and lots of lacing.

This one has a light but sweet and pleasant blueberry aroma, with honey, crackery malt, and some light caramel.

This is basic and light, but really just tailor made for the hot weather. It's got a pleasant and nowhere near overpowering sweetness, a light bit of wheat and caramel sweetness, and a very nice crisp flavor.

This is light bodied and very drinkable, with a nice smoothness on the back end.

This is not going to knock any socks off, but it's still a very pleasant and well constructed beer.

Clear copper. White head fades steadily to a ring. Blueberry wheat is straightforward in the nose with the fruit being fairly minimal, though not feint. It's well-attenuated and more essence-like, but not sweet or tacky. Wheat forms a great cereal-like nose, with light honey, strong vanilla and plentiful biscuit. Clean and with just a touch of pepper-like phenol on the end. In the mouth it has a strong oatmeal-like character to it with strong wheat textures, low, fairly engaging carbonation and good attenuation. Simplistic with essence of blueberry and nutty, biscuity, bland wheat, but the cereal/oatmeal character is uncanny and the beer is dry, clean and soft. Light honey and blueberry lingers on the finish. Very nic

The golden amber colored beer pours out into a Duvel glass with a 3/4” fluffy white head that recedes slowly to a cap of foam and then a thin irregular shaped island of foam while leaving a complex pattern of rings and a sheet of foam on the sides of the glass. Sipping creates a couple of arches of foam and lots of small patches and legs of lacing.

The aromas are filled with blueberry riding on a bready caramel tinged malt backbone that also plays a strong supporting role in shaping the aromas.

The flavors are similar to what is expected from the nose with lots of sweet blueberry and some grainy bready malt. For me the effect of the honey shows in that the sweetness is more than I’d expect from the berries or the malt by themselves. The hops are way in the background showing some light grassy, peppery herbal spiciness.

The mouthfeel is medium bodied and and both crisp and prickly with the finely bubbled active carbonation. The finish begins as the blueberry and sweetness start to fade to a semi-dry ending in the back of the palate that has some residual fruitiness and that also has a lightly spicy, peppery and herbal, but not bitter, ending.

On the whole a nicely done blueberry ale. The balance of the fruit and malt is backed up by the noticeable honey sweetness. The beer is clean, crisp and refreshing with just enough of an effect from the hops to prevent the sweetness from becoming cloying. That said I’ll be taking a pass on this one in the future since I prefer my fruited beers with a bit of tartness.

Today marks the occasion of NBS (Week 714) with the theme of New Fat Rusty Head Rail Sunday! Things are progressing nicely with this being my third (!) of the day. Hey, once I get started, I want to see it through until I either a) have to go to work (I just got the day off) or b) feel a nap coming on. I am like a cat as I have grown older. I sleep kinda soundly during the night, but I take frequent naps during the day to revive & refresh myself. I am a retired US Navy veteran & we learned early on not to take chow or sleep for granted, getting either/both in when & wherever possible. I have slept standing up, atop live ammo (!), wedged into the overhead or underneath storage racks atop bubble wrap & various other spots so that now, I can fall asleep at the drop of a hat.

From the Bottle: "Brewed with fresh harvested spring honey stolen from some very angry bees (we have the welts to prove it) and plump blueberries creating a refreshing ale with a delicious blueberry aroma, crackery malt flavors, a hint of sweetness and a clean blueberry finish. Chill Out Man, Have A Beer! [undersigned] Matt * Chris * Glenn"; "AWARD WINNING MOST REFRESHING BEER IN AMERICA - BREWING NEWS GLOBAL WARMING OPEN".

Hmm. Only 13 IBU. I want MORE! I settled for a Pop! of the cap & a C-Line pour. This, in turn, resulted in the formation of just over a finger of fizzy, foamy, bone-white head with moderate retention that left a modicum of lacing in its wake. Color was solid Amber (SRM = > 7, < 9) with NE-quality clarity. Nose smelled strongly of both honey & blueberry, but it was really sweet, almost like syrup. Hmm. Mouthfeel was medium. The taste, while absolutely of blueberry, was not as sweet as the nose had led me to expect. Instead, it had a slight tartness that worked well with the honey which became more assertive as it warmed. Finish was semi-sweet, not out of control or cloying like some that I have tasted. It was a pleasant drink, but it really wasn't my cuppa tea. YMMV.

Aroma is blueberry, and somewhat perfumey.

Well, you can certainly taste the blueberry. its sweet and faintly bitter. The snag is, to this palate anyway, this beer loses its appeal very quickly. Not bad in anyway, just not something I'd like to repeat. Honey is more of a feel than a taste.

Mouth is nicely between medium and full, berries on the finish.

Overall, as mentioned above, an average fruit beer, just not something I could deal with too often.

Poured from a 12oz bottle into a can style glass.

Look is a slightly purple/ dark orange with an offwhite head.

Aroma is a light fruitiness with tons of candy sweetness.

Taste is very chemical. I can’t discern a definite blueberry, but what I do is medicinal.

O: For what it is a decent beer. Basically a light blueberry wheat. No bad flavors... good summer swill but nothing to seek out.

O---Could use a bit more complexity, it's all blueberries all the time. But that's what's advertised, so....

Taste- a light graham cracker malt character with some nice blueberry action. the honey must play with the blueberries and make them more pronounced. has a slight fruity pebble taste.

Mouthfeel- light bodied. alil over carbonation if you ask me. crispy

Overall- this is a great summer brew or something fruity that's not overkill. for the style it's really solid. take this over all the fruit beers I can think of on the top of my head like dark horse raspberry or founder's rubeus or any ipa with grapefruit or any other fruit in it. great example of a fruit beer and prolly a great starter for getting someone into craft beer.

S: Blueberries and honey, along with cracker and maybe caramel malts.

O: Apparently I like this more than most others. I think they did a nice job on it.

Aroma - Just a huge amount of fresh blueberry, nice touch of sweetness as well. There is not much else going on but it is what it says.

Overall - It hits the mark for a blueberry ale, great flavors smells wonderful.

Light orange tinged brew with a light tan head. Sweet blueberry scent dripping off the nose of this brew. Maybe some malt in the back somewhere. Now for the flavor: more complex than I would have thought, there is honey some berry shows up and then with a blended malt/honey Ending. Not as sweet and not as berry as I would have guessed but after saying all that, sort of ok. Also watery and I think it could benefit from a bit more carbonation.

12oz bottle poured into glass.
Look: light amber, thin white head.
Smell: an over load of blue berries.
Taste: mostly blue berry, with a hint of honey. Almost too much blue berry.
Feel: easy to drink.
Overall: This beer would be better with less blue berry, it tastes too artifical.

Surprisingly not over flavored. If I'm being picky, it's a little light, but not enough to be a major problem. I got it in a draft with blueberries in it, I'm not sure if that's normal. They didn't seem to help or hurt the beer, overall. This is good and well balanced. I've been critical of FH in the past, but this is good.

Pours into glass with a foamy head. Clear and light straw color. Taste is light and fruity, with hint of honey and blueberry. Not overwhelmingly sweet. Mouthfeel is not terribly bubbly.
One of my favorite beers.

I had this beer on tap at the 10 Penny in Pittsburgh. I have always enjoyed beers from this brewery, so it was a no brainer to have a pint.

The beer is gold with a white head and nice lacing.

Berries, grains and something very floral in the nose.

The beer is fruit forward with some sweetness and more grains in the finish. It's a bit flowery and sweet mid glass.

The mouth is light and crisp.

This is a nice summer beer!

Pours clear, gold in color with 1/3 inch head. Taste is blueberries, cereal and toasted malt. Light bodied, medium carbonation and sweet. Makes for a fairly standard blueberry ale. Tasty and sessionable, but also a beer I feel I have had several times from several breweries.