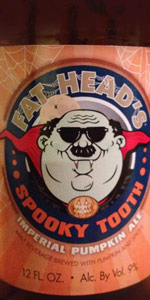 Had this on tap at The Old Bag of Nails in Mansfield, OH; served colder than what it probably should be. Still a fine tasting pumpkin ale. It doesn't go overboard with the pumpkin flavors and cloaks its ABV quite well. It is fine enough as served but would quite possibly be better in some categories if it were a bit warmer to allow scent and flavor to open up.

Flavor: Prominent cinnamon and clove character up front. Slight peppery flavor sneaks up on the back of the tongue. Moderate clove-like phenols. Balance is to the bready malt character but masked by spicy overtones. Finish is clean and dry. Aftertaste lingers and is spicy.

Overall impression: A big, bold, spiced ale. The upfront pepper and clove character makes me think this was fermented with a Belgian yeast strain. Enjoyable and worthy of aging.

This beer is a darker take on the style, a red-brown color that's too dark to see through while still keeping just a very little clarity. The tan head is sparse but showing fair retention. The patchy island of foam that remains through the entirety of the session leaves a ring followed by heavy spotting.
The aroma gives off pumpkin flesh and a sturdy spicing, particularly nutmeg and cinnamon, under a strong malt.
Nutmeg and cinnamon are up front on the tongue, but this beer hits the mark in having plenty of spices without being overspiced. It's also somewhat fleshy. There's some bite in this beer with a good dose of pumpkin and a bit of buttery crust in the back.
The body is light but firm with lots of bite from crispness.

Deep ruby body, with all day tan khaki head flowing thick. Aroma has pumpkin spice, and gourd aromatics to boot. Perfume like but so decadent, it's pumpkin pie in a glass. Delicious so drinkable vanilla, nutmeg, clove, and cinnamon this is a perfect pumpkin beer. I'm glad I grabbed some. Great flavor I will up date this when I buy a whole four pack, I'm sad I just grabbed a single.

Jumping on the imperial pumpkin ale train, Fat Heads brewers seem to want to take the beer back to jus that- beer! ...but without completely abandoning the common pumpkin ale aspirations to create a beer that mirrors grandma's pumpkin pie.

Beyond its crystal bronze hue, the tawny ale overcomes its short foam stance with tantalizing perfumes of toasted caramel and pie spices. Its early palate is chocked full of graham cracker, pecan, praline and peanut brittle in an utmost savory display.

Beyond there, the ale's almost butter pecan taste is decadent and malty-rich. Holding its rich barleywine character, the full flavor of brown sugar links up with the cinnamon, nutmeg and clove tandem that hits that pumpkin pie flavor on a high note. Toasty in its finish, the bitterness sets in, seemingly coffee-like or of the strained spices that trail in taste.

Its lavish and full body lingers on the palate with toffee and brown sugar with a wonderful warmth that's mostly of the imperial alcohol strength but also of the cinnamon spice. An afterglow of graham cracker and spiced rum leads into the next savory sip.

Impressive pumpkin pie aroma: pumpkin, nutmeg, cinnamon, and allspice. I can almost smell the buttery crust. A hint of brown sugar and caramel round it all out.

Flavor follows the aroma, and is surprisingly delicious. It's got quite a bit of bite to go with it, as well. This is the closest I've had to pumpkin pie in a glass.

Quite a bit of sting from a very lively mouthfeel. Medium-long sticky finish.

Pumpkin beers stand alone. It's not a style that I particularly love. Fat Head's absolutely nailed it. It's probably the tastiest pure pumpkin beer I've ever had.

A - Poured from a Growler. Hazy orange appearance.

T - More flavor in the aftertaste than anything. Subtle, then gives a good pumpkin finish. I think it has a good taste balance.

M - Initially not much up front, but then the heavier carbonation and 9% alcohol kick in.

O - Good beer. One of the better ones we get in Pittsburgh, although slightly overpriced. I think it has a very good taste, and is well balanced. Not too pumpkin-y, but not lacking in that area. If you like pumpkin beers, I definitely recommend it.

Flavor is fairly spicy, with a bit of fruity specialty malt. The abv is fairly well hidden, with a moderate sweetness that prevents the spices from overwhelming.