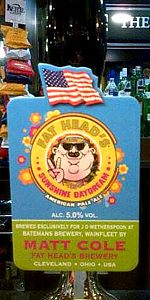 poured on tap at the Attic

LOOK: Clear amber yellow, two fingers of fine foam with great retention and lacing.
SMELL: Super fruity and not as dank compared to other IPAs, which makes sense. Lots of lemon and orange.
TASTE: It’s a session beer and it delivers that promise. Underwhelming if you’re used to Stone or Lagunitas’ super hop-forward offerings but I like it a lot for what it’s intended for, lol.
FEEL: Carbonated, refreshing, and a little bit dry.
OVERALL: I dig it. Definitely will seek it out for a lower-punch IPA in my fridge.

Love it! It’s my favorite session

Poured into a tall clear pint glass. Appearance is a clear amber body, with about a finger of white head with good retention and lacing.

Really tasting the lemon and grapefruit, while the fruit mentioned in the aroma are somewhat lighter but nonetheless sweet and complementary to the bitter notes and pine. Body is medium-light.

S: A practiced and mellow malt blend, but it's not alive. It is not at all floral, a very dull aroma. "Big hop aromas" What? Are we even drinking the same thing?

T: Sweet delicious ale, but it's astringent and brewed with hop extract.

F: It's building up on itself. That's not good. Real fresh ingredients don't leave residuals.

O: Like Rhinegeist brew--The grains are nice, Rhinegeist and Fat Heads always do well with them. But they're using shelf-stable year-round hop concentrates. Pro: Its cheap. Con: Its cheap.

12oz can into a glass at the fireside tavern in Strasbourg pa this afternoon. Bottled 8/1/19, so 2 months old.

Fruit comes through lighter in taste than on the nose. There is a very good hop bite.

Mouth between medium and full, finish bitter with a light fruity wash.

This bottle will help to fully establish today's NBS theme of New Fat Rusty Head Rail Sunday (Week 714). Wegman's recently opened a store here in Lancaster, PA & people are going gaga about it. I was impressed by its enormous size since while standing at the far entrance & looking to the rear, I saw the curvature of the Earth before I could see the back wall! They apparently carry Allentown's The Colony Meadery meads, but I just felt overwhelmed & forgot to look. 8=( Who needs Mead? No, really, who needs some mead? I have some for trade. In the meantime, they had CANs of 2SP's Oktoberfest, so I got a helpful clerk to single them out & I took two as well as some Fat Head's singles, since they have only recently achieved distro in out area. I maintain a dislike of bottled beers, but since I only review from home these days, I felt justified in my purchase. I used to be a fixture at Fat Head's Saloon in Pixbugh while a student at Pitt. Armed with a bus pass, several books, pen & paper, I could finish whole assignments as an ENGLit major while imbibing. Ah, those were glorious days, indeed.

From the Bottle: "As refreshing as wading in a cold stream in the morning sunshine or a walk among the tall trees. This beer has big hop aromas and flavors of citrus, tangerine and tropical fruit with a light malt backbone. This is a very drinkable session ale. (Our fans call it an obsession ale.) Peace, Love & Hoppiness! Chill Out Man, Have A Beer! [undersigned] Matt * Chris * Glenn"; "Brewing News 2017 NATIONAL SESSION IPA CHAMPION".

I began, as usual, with a Pop! of the cap & a slow, gentle C-Line pour into the awaiting glass. Here, no further action was required on my part since it foamed up on its own, unbidden, to form just under two fingers of dense, foamy, rocky, eggshell-white head with good retention, leaving behind some nice lacing. Color was Golden-Amber (SRM = > 5, < 7) with NE-quality clarity, prompting The Gelt Gang of Croesus, Midas & Mammon to rouse themselves from my living room couch where they are awaiting the NFL broadcast from London & join me in the kitchen for a taste. Nose smelled great! Definitely grapefruit & orange/tangerine, but laced with pine and mango. Mmm. Mouthfeel was medium, on par for the style. I have to admit that I was pleasantly surprised by the taste. All too often, these Session AIPAs are all aroma & no bittering hops. Such was not the case here! It had a very pleasant bitterness (60 IBU, per the label) with a lot of traditional AIPA flavors, like grapefruit & pine, plus newer flavors, like tangerine/orange & the tropical fruits, mango, papaya & guava. Finish was dry, slightly bitter, but not so bitter as to be off-putting. I now understand why it is so well-regarded & how it won its award. All of that said, its relatively low ABV left me feeling unfulfilled. 8=( YMMV.