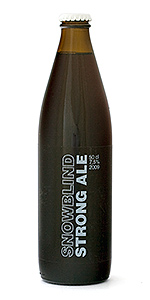 Hop-bursted using Amarillo, Cascade, Centenental, Columbus, Simcoe and Saaz. Most of the malt is Münchener, and then some Pilsener, Crystal and Pale Chocolate.

The smell is an explosion of grapefruit, bitter orange, flowers after a while is earthly aromas, dried grass and a hint of stable detected.

The taste is an explosion of hoppy aromas, with a presence of dark coffee and chocolate. The malt is there but nearly overwhelmed of the hop.

A nice carbonation is noted.

A very interesting beer, with the smell as the premium feature.

Would have been extremely interesting with the hops kept back a little.

T: Bitter hops marry bready caramell malt - the wedding could take place in this very bottle. Then there's the American piney and citric vibe from the floral hops. Liqourice and chocolate is more surprising.

M: Long bitter, bone-dry aftertaste that stays the entire evening!
Body is full while carbonation is held back - me like!

O: Pretty darn nice. This is the best from Mohawk up till now, at least in my mouth!

Reviewed by dqrull from Sweden

Huge hoppy aroma, lots of flowery, citrusy and earthly hops, really well integrated with a robust but soft maltiness. The maltiness hints at liqourice and various fruits, red berries and gooseberries caramellized in sugar. A very intriguing smell this one.

Taste is a raging battle between fruity and spicy hops versus an almost equally spicy and fruity malt-prescence! really interesting!... until an overpowering bitterness from the hopas crushes the battle before you can distinguish who was the victor. This effect gets better with increasing temperature though, but I think there are a bit too much of it all, there is a balance between the hops and the sturdy maltiness, but still, there is something... missing, or rather over the top, it cant really decide which way it leans, but still, it's really tasty. Some light notes of liqourice and some roasted notes in the end as well, as well as some additional fruits in the after-bitterness, surprisingly fruity bitterness actually, really nice.

Mouthfeel is a little bit stingy, but from the carbonation and not the alcohol, otherwise the liquid is the right viscosity and creams up ok on the tongue.

The smell is strong and elegant with lots of rich hoppy flavours; lots of fruits... Red apples, raisins, apricots, fresh raspberries. There are some very fragile spicy notes of cinnamon and allspice. Matured sweet notes of dessert wine (inclouding a touch of alcohol), some roasted notes of coffee with cream, salt liquorice and a touch of toffee.

The intense taste is very bitter, but not in an aggressive DIPA way. It is a bit sour and dry with flavours of liquorice, bitter herbs (wormwood?), some bitter coffee. Some roasted notes and a rather simple chemical sweetness. The long aftertaste got a bitter-sour citric flavour that reminds of lime juice. Hints of coffee and treacle in the finish.

The carbonation is mild, the small bubbles mild. The liquid is very smooth and a bit thick.

This is a complicated beer. Don't get me wrong, I am a hophead like many others. But the taste of this beer gets overwhelming, the sour-bitter flavours are all just a bit too much for me.