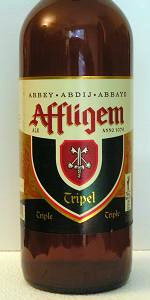 Notes:
View: Beers
Reviews: 362 | Ratings: 755 | Log in to view all ratings and sort
Reviews by TheLongBeachBum:

A 750ml brown glass bottle with a new, rather fancy looking, cream, red, black & gold colored coat of arms on the label. It has exactly the same "new" label design as the bottle of Dubbel, which I had earlier this week - except for the word Tripel replacing the word Dubbel of course. Corked (dated 22/02) & Caged.

Appearance: Pours with a massive expansive, thick solid off-white head, which takes forever to settle down. In fact, it has to go 3 distinct stages before it does. Starts with a voluminous fill in the glass, then it collapses painfully slowly at the sides, whilst lacing well, the crusty middle eventually catches up to leave a thick fog-like head, smooth & impressive. It does leave a fantastic looking rocky 3D lacing. Exceptionally clear straw color  I kept the yeast in the bottle. As with the Dubbel, it really does look the part, especially in a Chimay Goblet!

Nose: Gorgeously spicy, light fruity nose with a strong herbal like odor. Hops intermingled with some light citrus. Incredibly refreshing aroma  the alcohol even comes through in the pungent nose at the back end. Marvelous.

Taste: Bold, Bitter & Spicy, even hoppy at times. It has a very soft bitterness to start with, that becomes pronounced in the finish. Light grain malts & hops are well-balanced with talcum smooth spices & herbs, which effortlessly transcend the journey from glass to stomach. Has a light citric quality, without the acidic sharpness. Very enjoyable.

Mouthfeel: An athletic heavyweight. Big AND Powerful. 0-100 in 2 mouthfuls. I like the way that the alcohol does not dominate the spicy aspects, but merely supports them in an unwavering fashion.

Drinkability: Weighs in at a mighty 8.5%, but no warming whatsoever, just as it should be. It is *so* easy to forget how strong this Tripel. I had little problem getting down to the yeast sediment in this bottle.

Overall: Whereas the Affligem Dubbel was just too inoffensive, which I suspected was the start of a dumbing down by Affligems new owners for mass-market appeal  the Tripel goes to proves me downright wrong. Whilst the Tripel is clean drinking, it has much more character than I remember. This beer is street-wise, and knows what it needs to be, and do. I was disappointed with the new label Affligem Dubbel, but the corresponding Tripel is a far better beer, with a huge bold presence.
Well worth trying.

Confronted by both the Dubbel & Tripel ?
- Can only afford one?!
- Go with the Tripel !

330ml bottle, best before 31.05.08, purposely and properly aged to enjoy June 2008 in the appropriate Affligem chalice.

Many beers have their clarity subdued by a naturally occurring haze, typically from the sedimentation of the yeast, that is normal and expected for the style. Generally tripels are included in this category, although for the Affligem, the opposite seems to be true: it would appear the haze has subdued to a naturally occurring clarity, uncharacteristic of the style, despite the little flecks of yeast suspended throughout.

Indeed, this does appear more of a strong golden ale than tripel. Not only for its pronounced clarity, but also its colour, which is deep golden and resembling apple juice. Equally uncharacteristic is the absence of head. While most tripels froth at the top, this struggles to sustain its lace. It's as untrue to style as it is unpleasing to the eyes...

The drinker is also deprived of what is normally smelt from a tripel; there is no spectacle of orchard fruits or spicy yeast. The yeast especially is noticeably absent. Perhaps a hint of something floral, but essentially, this has no character.

The beer fails to knock your head back as it does to challenge your taste buds. Flavours are simple and straightforward - apple and pear, a hint of toasted malts or freshly cut wheat, and a coating of spicy hops. The carbonation is strikingly high and scrubs away much of the subtleties of the flavours. There is a moderate level of phenols, well below what is welcome in such a beer.

While it would seem age has been of detriment to this beer, my opinions of it have not changed. There is no question in my mind the beer is better off fresh, although my enjoyment of it tonight was really no different then the few times I've had it fresh. Affligem is certainly not the best example of Belgium's abbey breweries, and with such a plethora of them, there is no reason you should settle for this particular one. That being said, you wouldn't be so hard done by if you had to...

This pours a cloudy golden amber like color with a huge white head. The smell has a candy sugar, yeast, and "bisquit" aroma. The taste is a crisp dry sweet sugar beer with hints of clove, wood, and fruit. The m/f is light and very creamy with a dryness that is very good. This is a very good beer, very sugary sweet, but still a classic Belgium Tripel that you must try.

Got this 12 oz bottle as part of an Affligem gift pack at Christmas (two blondes, a dubbel, a trippel, and a glass I think). This was the last one remaining.

Poured a darkish gold into an oversized wine glass. Big, fluffy white head almost overflows the glass. Aroma is bread, cloves, pepper, and mild sour fruits. Standard, but good. Flavour is quite sweet, with some fruity sourness in the background. A little bit of coffee or chocolate in there among the spices. Mild pine, as well, which is unusual I think. Good, solid mouthfeel (although nothing special) and a sour aftertaste that I actually liked.

Appearance – Hazy yellow/amber colour with a large size fizzy white coloured head. There is a low amount of carbonation showing and there is some good lacing. The head lasted for over 5 minutes before it was gone.

Taste & Mouth - The beer has an average amount of carbonation and I can taste banana mixed with lemons, yeast, and some coriander/clove. There is also some green grapes, herbal/floral notes, and a bit of a apple/pear sweetness. It ends with a tart and dry lemony aftertaste.

Overall – Very drinkable given the ABV and well balanced. It's definitely the best beer I've had from this brewer. Pick this one up if you happen to come across it.

Poured from 750ml bottle with champagne style cork and basket into Chimay goblet.

A: Deep straw color with one finger of creamy head which is thinning but not going away. Foam clinging to the side of the glass like soap suds cling to dirty dishes. Carbonation evident even several minutes after pouring.

S: Orange and lemon citrusy aromas along with bread. Faint other fruit aromas of apples and peaches.

T: More lemon than orange citrus in the taste, at least initially. A small tang of sour, overripe peaches at the finish which does not linger.

M: Ticklish carbonation busy in the mouth. Beer is velvet smooth across the tongue.

D: Seeing as Belgian tripels are my go-to style, I'll call this one as pretty drinkable to me. It's not my favorite tripel (I'd put Westmalle Tripel at the top of the list and Victory's Golden Monkey above this but not by a huge margin), but I'd not hesitate for a second if offered more of it.

Poured froma 750ml bottle that is labeled differently than the example picture ... a nice lively amber orange color with a relentless bright white head that would not die. High carbonation levels in this beer. Nose is of spices, yeast and candy sugar. Very "tripel-like." Palate is extremely spritzy, with finely balanced hop character and sweet sugar. Slightly fruity, and yeasty. Residual spiciness. Mouthfeel is aggressively carbonated ...alomost too much so. Medium/light body and some alcohol warmth in the mouth. Over all, a good tripel. Somehwat unchallenging and maybe a tab too light, due in part to the rabid carbonation, but a very drinkable, enjoyable abbey tripel.

appearance: Classic look for a tripel, orange colored. Less than a half a finger head.
smell: I am picking up a boozey smell. I have a 750 ml bottle that clearly states it is 8.5% abv although the BA listing shows 9.5%.
taste: The boozey smell trascends into the taste, I'm dissappointed.
mouthfeel: medium
overall: I would not recommend this. I guess I have high expectations for a Begium Beer.

Poured from 750 ml bottle into a chalice. No date on the bottle, however on the side of the cork is printed: 3/05, so I assume it was bottled March of 2005, making this bottle just over three years old.

The color of the label has apparently changed since the current image was uploaded, as it is red and not green. Dark in color for the style, golden almost brownish and very opaque. Creamy, velvety head leaves almost no lace.

The initial pour produced a very different aroma than what was subsequently presented. At first it is very, very sweet. Sugary fruits; apple and cherry, with loads of Belgian candy sugar. As it warmed it rounded out becoming much less sweet, and more dark, smooth, and caramely. This is not a standard tripel. The label calls it a "Belgian burgundy".

The flavor, like the aroma, also changed fairly dramatically as the beer had time to sit in the chalice. It began quite harsh. Sour fruits meshed with strong alcohol. Apple and peach. Spice profile is very intense. However, as it rested the flavor mellows greatly, giving way to a lessened intensity of all the aforementioned flavors and a robust caramel maltyness. What was initially sharp and eye opening is now the quintessential sipping beer. Not a traditional tripel by any means, as it is much darker and richer. Let this beer sit for 5-10 minutes and enjoy.