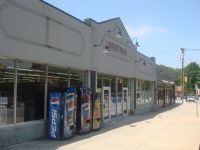 3.98/5  rDev -12.1%
vibe: 3.75 | quality: 4.25 | service: 3.5 | selection: 4.25
I was skeptical of this place when I saw it from the street since it is the size of a small grocery store. The other advocates were spot on. There’s plenty of liquor and a sizable selection of beer, both microbrewed and imported. There was a large quantity of Drie Fonteinen, both the Oude Gueze and Armond & Gaston. They sort the beer with North Carolina stuff at the front and then branch out regionally, nationally, and finally to imports. All but the imports are mostly stored cold. Nobody asked if I needed help, but the staff was friendly.
Apr 20, 2019
Rated: 4.73 by Buffettman2018 from North Carolina

4.4/5  rDev -2.9%
vibe: 4.25 | quality: 4.5 | service: 4.25 | selection: 4.5
Vibe: I stopped at this place on a Saturday morning. The beer department is located along one aisle on the left side of the store. There was one cooler that ran along the full length of the store and included all of the domestic beers, starting with North Carolina beers followed by beers from the East Coast and beers from the West Coast. There were some separate racks in the back with beers from other countries, which were not refrigerated.

Quality: Beers were stored out of direct sunlight and about three quarters of the selection was stored in the large cooler.

Service: There was only one other customer in the store (shopping for groceries) so I didn't see any staff walking around the aisles. The only person that seemed to be working was a checkout clerk.

Selection: The store had a very extensive selection of domestic beers and had a particularly good representation of local beers from North Carolina. It had one of the biggest selections that I've seen in the Piedmont Triad area.

Reviewed by KP_McPurg from North Carolina

4.58/5  rDev +1.1%
vibe: 4 | quality: 4.5 | service: 4.75 | selection: 4.75
I have going to this place for the last year every time I visit family. Excellent beer selection both the hot new stuff and the great local stuff. I always ask for good local suggestions and so far everything has been great. Beer is fresh, they have regular tastings and the place is pretty easy to find. I must stop if you are in the area.
Dec 20, 2016
Rated: 4.75 by Bjm94 from North Carolina

4.05/5  rDev -10.6%
vibe: 3.5 | quality: 3.5 | service: 4 | selection: 5
Picture a smallish, outdated grocery store with an amazing beer selection- a beer selection so comprehensive that its very existence in said store creates a sense of incongruity strong enough to be almost unsettling, in a Twilight Zone way. That's Bestway on Walker Ave in Greensboro.

Man, have they got beer! It's organized by state/country of origin, with NC getting more space than anywhere else- their selection of NC beers is very comprehensive. The refrigerated beer section stretches from the from the front of the store to the back, and seemed to be all domestics- mostly craft/regional with a small amount of space for the big-name AALs. Running down the middle of the beer aisle is a grouping of free-standing shelves for unrefrigerated imports; their selection of German and Belgian beers in particular is just mind-blowing. They fill growlers as well, but I didn't make it past the "wall of beer" so I can't speak to their draft selection. I didn't see any evidence of a mix-a-six option.

Service? Eh, it's a grocery store. The young lady stocking beer made a point to ask customers if they needed help finding anything; that's about as good as I expect service to be in a grocery store. I didn't ask staff any questions, so I can't judge their beer knowledge (or lack thereof). Prices were about what I'd expect in a smaller grocery store: not as good as box-store prices, and a bit higher than you'd pay at a bigger grocery store. The thing is, you'd not find 99% of this beer in a box store or a "normal" grocery store, so I don't begrudge them a bit more per six pack.

If you're in Greensboro and you are looking to pick up a six-pack or twelve-pack of good beer, you're probably wasting time going anywhere but here.

Rated by Minnesota_beer_guy from Minnesota

Reviewed by W_Des from North Carolina

4.84/5  rDev +6.8%
vibe: 4.25 | quality: 5 | service: 4.75 | selection: 5
Great local grocery store with a wall of beer. The selection is very good and they will get specialty release beers. They update their beer menus page often which is great when I want to check out what is in stock. They have a growler fill area but you have to use their growlers which is where I docked some points. Overall a great beer place.
Jun 04, 2015
Rated: 4.01 by REVZEB from Illinois

Reviewed by ssslowboat from North Carolina

4.5/5  rDev -0.7%
vibe: 4.5 | quality: 4.5 | service: 4.5 | selection: 4.5
Amazing selection! Best in the triad, hands down. Of course you can find rare and very expensive beers, but I can always find something in my price range and haven't had anything but fresh beers and friendly service. Most def worth checking out!

(also worth a look is a laundrymat across the street, pool tales with a bar in the back)

Reviewed by Zonian1 from Ohio

4.28/5  rDev -5.5%
vibe: 4.25 | quality: 4.75 | service: 3 | selection: 5
This is basically a quaint small town grocery store with a killer beer section. I visited on a busy Saturday afternoon in Dec 2014. There were lots of people loading up carts with huge purchases of NC beers. The NC beer selection was the best of the 5 BA-top-rated stores I visited in the Triangle area that week. For example, they had a stack of Hop Drop n Roll cases 5 feet high--beer that was canned the day before I visited!! Amazing! Also, a really nice selection of Wicked Weed offerings. And many others I hadn't seen at other stores during my week in the Triangle area. The down side: this is a grocery store, not a beer store, which meant there was no one in the store on a Saturday afternoon who could give any advice about the beer offerings, except for other customers. I shudder to think about the business they could have been doing if they'd have had a smart beer person helping the customers. However, put that aside, do your own homework before you go, and definitely make Bestway a stop if you are anywhere close to the area.
Dec 13, 2014
Rated: 5 by wilson9603 from North Carolina

4.5/5  rDev -0.7%
This place has a monster craft beer selection. Just about anything brewed in the state of NC is available here, from flagships to seasonals. Further down the cooler, you get all the craft offerings from around the country, and finally a ton of imports. There is a growler station offering rotating fills of 16oz, 32oz, and 64oz jugs. There is quite a selection of glassware, as well as some interesting t-shirts and other swag from time to time. They do quite a few tastings, and have special releases of rare beers when they have them. This is a full grocery store, so there is plenty of food available. Also, there is a decent wine selection. Worth a stop if you are in the Triad.
Dec 10, 2014
Rated: 4.92 by anthonyvin from Georgia

Reviewed by pauldave1976 from North Carolina

1/5  rDev -77.9%
Horrible customer service. These guys have always been completely rude to their customers and are WAY over priced. But today took the cake. They were the only bottle shop to receive Bourbon County Coffee and REFUSED to sell it to the people waiting. Never again will I spend a dime with them.
Nov 28, 2014

Reviewed by Martyrob from North Carolina

4/5  rDev -11.7%
Selection is OUTSTANDING with tons of great beer to choose from, but they are not very friendly and many of the employees are not very knowledgeable when you ask questions so I give a 4.
Nov 20, 2014
Rated: 4.99 by Luke_logan from North Carolina

Reviewed by Brewndruid from North Carolina

5/5  rDev +10.4%
Bestway is my go to bottle shop! If you can't find it here than it is either unavailable here, or it isn't worth having!
Roger, Nancy and Leslie have put a lot of hard work into this projct and it shows. The beer knowledge is some of the best around.
Sep 19, 2014
Rated: 4.5 by Cubatobaco from Virginia

Reviewed by HopUpTriad from North Carolina

3.77/5  rDev -16.8%
vibe: 3.5 | quality: 4.75 | service: 2 | selection: 4.5
The selection is great, I won't deny that. There is beer gems tucked in every nook and cranny at a decent price. Wine was pretty sub-par, nothing that stood out. The problem is, you can have the best selection but the people make it a home run for me. It took forever for me to locate anyone, besides the one at the cash register. When I finally found someone, the answers I received were dismal. I wasn't even sure if it was lack of beer knowledge or maybe just not wanting to. Both employees were very unfriendly and less than helpful. Another problem, which I brought to their attention, is the outdated beer. I didn't look at snack items for dates but I found it on 3 different beers. I think this establishment is good and in a unique, but fitting, location but it could be phenomenal if managed properly.
Aug 03, 2014
Bestway in Greensboro, NC
Place rating: 4.53 out of 5 with 108 ratings