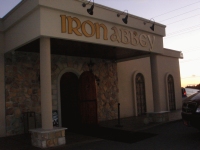 Notes: Hours of Operation:
Sunday - Saturday: 11am - 2am
*Check for special event opening times and breakfast specials (7 am - 11 am)

The restaurant has 40 beers on tap, with a great selection of local, national and international offerings, lots of seasonals and all that. There's also a large bottles list.

It's got a wood and iron, basementy sort of vibe that actually hits pretty close to the mark of being warm and comfortable and just a little bit faux. (The Loft has a small bar and sitting area that hits even closer to the "old world charm" thing they're going for.)

The food is hit or miss. Some items are really good, others are okay, and I've had one item (the pork shank) that was plain awful. Same goes for the service. The owners are great, extremely knowledgable and friendly. I've had some servers who are also great, some that are average and others that are completely inattentive.

They call the bottle shop the Loft. The staff there has always been top notch. They've got a huge, fancy-ass walk in cooler organized by style with the bottles displayed beautifully. Unlike other shops with thousands of bottles, this one has maybe 800 or so, but it has a "curated" feel and rotating selection that makes browsing much easier and more enjoyable. Prices are high, but they've got some amazing bottles, and what can you do, it's Pennsylvania.

They've also got four taps upstairs, a coffee bar, some cheese and meats.

I've been here many times and will be back again. Wish the food and service was consistent, but with what else they've got going for them (the beer!) it's still worth it.

4.14/5  rDev -3.3%
vibe: 4 | quality: 4 | service: 4.25 | selection: 4.25
I was only there for the bottle shop upstairs so I can’t teally comment on the food although it smelled almost unbelievably good. There were lots of people there and it was during dinner time. The bottle shop had some brews I hadn’t seen around. The prices were pretty decent compared to other “bottle” shops in the area. The guys working there were more than happy to help me out. Good place that I will revisit for sure.
Mar 16, 2018

V---It;s a soccer bar and I can't stand watching soccer. Not their fault, just one of my personal distastes.

Q---Excellent selection of all sorts of alcohol. Food is pretty damn good, too.

S---Bartenders are attentive. One problem we've had is that they don't tell you that a $13/glass wine isn't part of happy hour. No apology or anything either.

S---Absolutely spectacular. They have near enough everything you could ever want.

F---Really good food. High quality across the board. We've never run into something bad.

Reviewed by IdrinkGas from Pennsylvania

Reviewed by JNForsyth from Pennsylvania

4.41/5  rDev +3%
vibe: 4.25 | quality: 4.5 | service: 4.25 | selection: 4.5 | food: 4.5
First floor is a nice little bar/restaurant with 40 or so beers on tap. Food is good, express lunch buffet from M-F is a nice touch. Upstairs is a small whiskey bar with 3-4 higher end beers on tap, also had local cold brew coffee on a nitro tap which is an awesome touch. Bottle shop is well laid out, everything marked with a price and easy to see. Walk in climate controlled beer cellar is very nice as well. Prices tended to be on the high side but overall a place I will stop at anytime I'm in the area again.
Aug 15, 2016
Rated: 4.14 by scottbrew4u from Pennsylvania

Rated by denny702 from Pennsylvania

Reviewed by 50marathons from Pennsylvania

Rated by ncarter5889 from Pennsylvania

I certainly can't blame the Iron Abbey for doing it, because you've got to sell what people want, but I'd hardly call fish & chips, nachos, and hot wings "Gastro Pub" fare. Pub fare yes, "Gastro"... not really. That's not to dismiss the chefs though because there are a few interesting items including Gorett's Original Sin (Brioche bread, beef, chorizo, ham, gouda in gravy topped with an egg), the Smoked Salmon Wrap (salmon, cucumber, lettuce, tomato, red onion and mango vinaigrette), Chorizo & Crab Mac N Cheese, and the Brazilian Steakhouse Sampler from next door. I thought the fish & chips were very nicely done and well presented, but beyond that everything else my table sampled was fairly basic. I'd say their food is better than Applebee's or Chili's, but not really by that much. On the other hand, my children were happy.

It's an interesting looking and nicely done place, although perhaps a bit over the top and Disneyland-esque. I appreciate that they've put money into it and invested in some important areas (like an actual wood floor versus the plastic look-alike). I also like that they've added the football theme, and to a certain extent that makes the whole thing work except that it's not just a bar where fans come to watch games and drink good beers, it's also a restaurant. On the other hand, my children really liked the decor.

So I won't discount the atmosphere, because honestly, it's kind of cool and you should really check it out just for that, but the added bonus, actually the main reason for visiting is the beer. There are 39 taps, all good stuff, and a hand pump (gotta love cask!). They've also got exclusive "house" beers that are done as collaborations with local breweries. That's both interesting, and it supports local breweries.

The service was OK. It wasn't "high end" but nor did I expect it to be, and the server for our table was pleasant and attentive. In fact, the only fault came from the bar. If indeed they are using 16 oz. pint glasses, and I believe they are (the bottoms looked thinner than the normal 14 oz. shaker "pint" glasses that most places use), I received a cask beer who's head had dropped leaving me with an estimated 10 to 12 ounces... kind of a bummer. I could have said something, and if I was in Europe I would, but here in the U.S. I just let it slide because although the bartender dropped the ball, the server then dropped it again by not saying something herself.

decor is lots of wood. 4 sided bar is in the center, surrounded by tables for dinning. a bit cramped.

the selection, and quality of beers available would be hard to beat. 40 beer draft list has a good mix of styles, and some limited release selections. Mix of American, English, German, and Belgian. The bottle list is long, well organized, and has some rare stuff if you're willing to fork over some serious cash.

food was quite good. Menu is pub fare - I had the Steak Fritz - the strip steak was cooked a nice Medium Rare as ordered, and came with a fried egg, along with the fries which were tasty.

Our waiter was very attentive, and friendly.