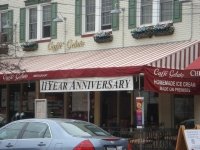 View: Place Reviews
Reviews: 2 | Ratings: 4 | Log in to view all ratings and sort
Reviews by pwoody11:

As MOBUD mentioned, they have expanded not too long ago, and in my opinion, they lost some quality with the expansion. I would go here a few times a month before the expansion. Since the expansion, I have chosen only to attend events, and I am borderline on still going at all if I continue to see a digression. Among 3 DFH dinners and a Chimay dinner, I have attended a few wine and one vodka related dinners as well.

Ryan, the owner, is always there and puts in tons of time. He is dedicated and hardworking. Unfortunately, he has had to hire more employees and with that the quality of staff has gone down. For example, someone at my table thought their meat was too rare. When they asked the server to fix it, he replied, "we're kinda busy, but I'll see what we can do". This just one of a handful of things I have seen.

The second problem I have is the new head chef. The old chef, Dunlap I believe his name was, was phenomenal. The new chef, not so much.

While I admire Ryan and Cafe Gelato for putting on the various dinners, something which is hard to find in Delaware, I strongly feel the expansion may have been a little bit too much, too soon. Maybe all he needs is a good GM to help him out. I really hope the next time I go isn't the last.

Caffe Gelato hosted another excellent dinner in their ongoing series with Stone Brewing Company and their rep Lee Marren. The restaurant is located on Main St. in Newark right down the street from Iron Hill. A recent expansion has almost doubled the size of the dining area including many booths and candlelit accents on the walls. We were fortunate to be seated in the private room downstairs, so conversation was easier than in the very busy main dining areas. The food was great and the pairings worked for the most part. Lobster risotto w/Stone Pale Ale, Seared foie gras w/the IPA, Wild Boar chili w/Smoked Porter (chili overly spicy for the beer), and Seared Lamb lollipops w/Oaked ABA. The service was good considering we were detached from the rest of the restaurant; no real problem getting the beers timed with the food. Lee was able to visit and talk for awhile about Stone and their plans for DE.

Due to the fact that this was a fixed dinner, I did not get to research the other beers that they feature. They have 5-6 taps at their cozy bar; I saw a DFH Pimp tap handle, so I know that for sure. They have carried 10 or so bottles in past including Chimay, so beer is offered in addition to their extensive wine cellar. The owner Ryan has done a fine job including good beer dinners along side the wine dinners they host. I have attended many other dinners here (featuring Chimay, DFH, Victory, Samuel Smith, and others) and believe you get good value for your dollar.