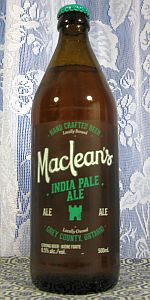 Notes:
View: Beers
Reviews: 3 | Ratings: 12 | Log in to view all ratings and sort
Reviews by BigGruntyThirst:

Pours a bright golden-yellow colour; crystal clear in complexion, and capped off by nearly two fingers of fluffy, bone white-coloured head. It remains in place for more than five minutes, gradually wilting until only a creamy, foamy cap and decent-sized collar have been left behind, along with some messy seafoam lacing. Somewhat leafy and floral on the nose, with accompanying hints of lemony citrus peel, oranges, pine resin and some faint caramelized sugar sweetness.

The taste pretty well follows the aroma in lock-step, though the malt backing is a bit more pronounced here. Bready, grainy malts and some lightly toasted biscuit flavours come through initially, with the hops taking over from there. I am getting notes of marmalade and grapefruit, with the hop flavours increasing in intensity as you approach the finish, becoming somewhat earthy and resiny by the end of it. The bitterness lingers on into the aftertaste briefly, along with a hint of strawberry. On the lighter side of medium-bodied, with middling carbonation levels that offer up a good, crisp bite. Slightly slick on the palate, but overall I find this to be a much more refreshing-than-average example of this style; one which drinks noticeably lighter than it should.

This one has been in tallboy cans for at least a year now, and the abv is now 6.0%. I am pretty sure there has been a recipe change with MacLean's IPA - I am getting a lot more biscuity, bready, toasted maltiness and butterscotch than last time, with a pointedly earthy, herbal, woody hop bitterness that is not really what I am looking for in this style. Almost English in terms of flavour profile, but with the bitterness of an old school West Coast IPA - I don't dislike this beer, but with so many other IPAs to pick from these days, this one fails to stand out.

Got this one at the LCBO this past summer

APPEARANCE: Pours a two finger, looser, foamy white head with decent retention. Clear gamboge orange in color with no carbonation evident. Head slowly fades to a foamy cap and leaves chunky lacing on the glass. A splotchy wisp remains with some falling dots of lacing down the glass as it empties.

PALATE: Medium body and medium levels of carbonation. Lighter on the palate, semi-creamy, goes down fine and finishes quite dry. A little foamy perhaps, but otherwise fine.

OVERALL: A decent beer for sure. Drinkable and enjoyable, especially on a warm day, but nothing overly special.

Purchased at the LCBO for just over $3.00 for a 473ml bottle. Served at 4deg C in a draught glass

A- Opens well and pours a 1" high white head that lasts for a minute before film out. Medium gold color and filtered clear

S- Decent hop base but not much dry hopping here.

T- A touch bitter in a bad way. More a English IPA than American IPA.

M- Creamy at first but then the chalkiness kicks in.

O- Ok but not great. Will not buy again though. Just an average English IPA for all intensive purposes.

This ok brew went well with...... Lasagna with lots of tomato sauce, meat and cheese. A few mushrooms go well on the bottom layers but don't put them on top as any exposed will burn slightly