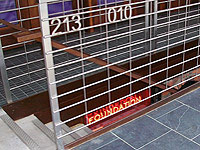 Reviewed by Beerness from North Carolina

4.33/5  rDev +4.8%
vibe: 4 | quality: 5 | service: 4 | selection: 4
I try to visit the Foundation when I can, but that's mostly on weeknights, as they are usually packed to capacity on Friday and Saturday nights. I like the feel of it, a basement bar that takes you underground off the bustle of downtown, with old, ruined brick 'foundation' walls, though it's a bit cozy (small). This being Beer Advocate, I must mention first the beer, which is pretty solid. They maintain a nice rotation of 6 NC-only taps. They also get props from me, as this is where I was able to drink two pints of Duck Rabbit's Paul's Day Off...mmm. Next I have to talk about the massive bourbon list and great cocktails. Probably the best around, as they have some skilled bartenders and make all their own syrups. You can get some peanuts or some chocolate, but after that, you're not gonna find any food. They've even made some beer cocktails in the past, even one involving Sexual Chocolate (can't remember what all it was, cause I was too busy drinking Sexual Chocolate).
May 06, 2011

Reviewed by wedge from North Carolina

Foundation is located down a flight of stairs parallel to Fayetteville St...a small, dark, (cozy?), hand excavated space that has a sort of hip-yet-classy feel to it. Stained wood structure above, rough exposed brick and stone walls, small wood bar. The place is tight and it has been pretty busy in all of my somewhat limited experiences. Friendly, attentive staff does the best they can to handle the crowd. They don't rush the drinks and seem genuinely interested in providing a quality finished product. All beers appear to be offered in 10 or 16 ounce pours and they do get some local specialties (I've had both of the Paul's Day Off and Christmas Vacation from Duck Rabbit). I've seen Aviator, Foothills, Highland, Big Boss, Carolina, French Broad, Mother Earth. Nothing special (or perhaps "appropriate") in terms of glassware; everything is served in the same size glass, depending on the chosen pour size. Beer prices are reasonable, featured cocktails will run you $9-$10.

Quality beverages all around. I enjoy it more when it's not packed, so it seems to be better on weeknights. Worth the experience...

Reviewed by blackie from Oregon

4/5  rDev -3.1%
vibe: 4 | quality: 4 | service: 4 | selection: 4
walked down Fayetteville street through the aftermath of SparkCon attempting to locate Foundation, passing it twice, before spotting the case of stairs leading underneath the building of what looked to be some sort of theatre group - maybe the groups of people seated outside should have been a clue, the guy checking ID's had to run downstairs to make sure they were still letting people in - maybe annoying to some but it's great to see lest the place fill with the overflow of the clusterfuck Raleigh Times has become, seemed limited to just a few more people than available chairs

dark, cool, and thoughtfully lit, the place has the feel of a 19th century basement with exposed brick and rough, heavy crossbeams, though I question whether this is genuine as the entire street was rebuilt not too long ago, this would make for a pretty calming environment were it not for the music - well chosen but perhaps a little loud for easy conversation, the crowd itself was a little iffy but that's tough to avoid on an event night

the selection was eight taps, all NC micros, French Broad 13 Rebels, Aviator Saison, Carolina Pale Ale, Duck-Rabbit Doppelbock, Highland Kashmir IPA, Big Boss Kolsch, and two other breweries that escape memory, no issues with freshness, but the beers were served in the same glasses used for - and better suited to - their tempting cocktail menu, why go halfway?, my one knock on what would otherwise be a 4.5 for quality

the doorman was friendly enough, the bartenders were brief but entirely too busy with only two attempting to produce pretty involved cocktails for the entire bar, we were served quickly regardless