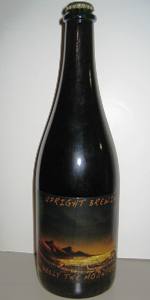 Notes: Inspired by the great Prize Old Ale once brewed by Gales in England, this beer is deeply malty and full of ripe fruit, leather, wine and oak flavors. The Billy is partially barrel aged with brettanomyces yeast, lending a distinct twang and developing unique aromas over time. Bottled still and best served at about 55F to be finished at room temperature. Cellar for up to five years.

"Billy the Mountain - A traditional English-style Old Ale, having undergone over five months of oak barrel aging and another several months in the bottle."

750ml, surprisingly unwaxed capped bottle (@8% ABV), shared once again by a good beery friend. So, there's a mountain named Billy? Or is 'billy' used in a verb context with which I am unfamiliar?

This beer pours a dark, murky, orange-tinted brown colour, with two fingers of puffy, loosely foamy, and well bubbly beige head, which leaves some approaching land-ho profile lace around the glass as it lazily recedes.

The carbonation is quite laid-back in its bored-seeming frothiness, the body a so-so medium weight, and more or less smooth, just a wee bit of indistinct yeasty esters maybe not bringing their polite A-game, as such. It finishes off-dry, the rich underlying malt still contending with a sour fruity character that intends on pulling on that loose thread of the sweater.

Overall, this is certainly a flavourful and well-made brew, yet, even with the big-boy barrel effects, it lacks that oxidized, 'under the basement stairs in the house you grew up in' vibe, y'know? I'm sort of nitpicking, but sort of not - at any rate, check this one out if you want to see what an Old Ale blended with some Flanders Red Ale would be like.

I was expecting interesting tastes from this brew but Upright missed the mark. I've read countless articles of tart/sour English porters but an old ale? And this sour? The beer was incredibly unbalanced and, unfortunately, non-drinkable. Hints of something lurking behind the sourness was evident, my suggestion, leave the sourness to the Belgians.

750ml bottle purchased at The Beer Mongers some months back.... grading based on memory here... have a grade, not too much to say.

- Nice dark and super foamy brew... can't see much through it, murky brown with a huge light mocha fuzz... had to wait quite awhile to get it to calm down.... must have still been working hard in the bottle...

- Medium bodied, and plenty well carbonated. Let it warm a bit too... and it is just kind of a wild drink.

- Overall the Saison qualities sat heavy, while the other qualities I was looking for... weren't there... like a more barleywine dominance. Overall it was too carbonated for my liking... and the yeast/brett took over. Worth the try, but I can't see giving this an A. Sofar I am a much bigger fan of Uprights lighter brews... 4... Alcohol was well hidden though I might add.

Chilled 750mL bottle into a glass. Purchased at the brewery with ramnuts' help back in March, I think. Thanks, Frank.

A: Pours a murky brown body, translucent at the edges but dark in the center. The head is two fingers of light tan foam that recedes quickly into a short-lived cap and then a moderate collar at the edges. Some lacing as I sip.

S: This beer evolves quite a bit as it warms. At first, it's molasses and nuts; the beer later adopts a light leather character, then finally nuts once more. It's not altogether pungent, though.

T: Wood, molasses. Some caramel and leather, with a touch of hay (funk) and tannins in the finish. The flavors are not well integrated, piling on in random orders and wavering strengths. In the finish, the flavors simply drop out and leave a small, lingering alcohol burn that isn't particularly pleasant.

M: The beer is thin, with a watery flavor that is accentuated by the strong tannic character as it warms. Well carbed. There is an alcohol burn in the finish that detracts from the experience. If it were thicker, it would mute the burn, but its thinness makes the experience harsh overall.

D: It's not undrinkable, but it's uninteresting. Kind of has an experimental homebrew vibe right now.

Overall - This is a lot better than I remember it. I just remember an acetic mess last time I had a bottle. This has a much more controlled brett flavor with an enormous amount of molasses.

Big thanks to msubulldog25 for the trade!

Love the labels on these Upright seasonals. Active head that settles quickly into a dense, pillowy foam. The beer itself is a murky brown that doesn't settle out. Smell is unusual -- prune and caramel with slight brett funk. Taste leads with vanilla and a slight tartness followed by brown sugar/toffee, characteristic dark fruit, and a long vinous finish. Mouthfeel is smooth but not slick and carbonation is high but dense. This beer is really, really terrific -- almost like a Belgian old ale, whatever that might be. Will have to track down some more bottles, would love to see what another year or five does to this.

750mL bottle poured into a tulip. Thanks to Jason for the bottle!

(T)- Similar to the smell in the malt profile. Very very dense in a raisin, cocoa, clay, and a bit heavier yeast presence than in the smell. Alot of dry wood too somehow.

(D)- I appreciated the effort, but not exactly Upright's best. A little disjointed and coarse. Also, a bit different than your average old ale.

750ml bottle into a tasting glass. Thanks, Chris, for sharing this. I'm always excited to try a new Upright!

S: Pretty sour, with floral Brett and tart vinous oak. The wine barrels really dominate the aroma, with the Brett being the only other presence. Pungent, where's the Old Ale?

T: Follows the nose - dry, floral, barnyardy Brett and rich red wine barrels. Delicious, as long as you don't think too much about what the bottle says it's supposed to be.

O: This one should really be listed as an American Wild Ale: the intentional addition of Brett, plus maturation in freshly-emptied Pinot barrels, makes this entirely unlike any traditional Old Ale. For what it is, it's pretty good. It's certainly the least impressive Upright beer I've had so far, but I'd gladly drink it again.

Murky cola-brown, with almost no head. Not a lot of carbonation here. A glassful of mud.

This doesn't smell much like an old ale -- more like an oud bruin. Nice cola sweetness, brown sugar, toffee, a bit of sour cherry.

Caramel, toffee and alcohol in the front, plus touches of vanilla and dark chocolate. The swallow brings a flash of sour cherries and a hint of balsamic. Some sips are great, a nice blend of sweet and sour. Others are too sour. Tartness grabs onto the back sides of the tongue between sips.

As thought, there's almost no carbonation. Body is medium light; alcohol is just a bit of heat on the tongue.

Pour is murky and muddy dark brown with virtually no head. Nose is heavy dark malt, molasses, caramel, brown sugar, dark berries all mixed together and not really working well as a group. Taste is brutal, overly sweet and messy. Malts sugars with burnt grain and burnt caramel, overly sweet berries with just way too much sugar. Body is full adding to the unpleasantly with virtually no carbonation.

TulipSnifter and I each had a glass on tap at Grain & Gristle on New Years Eve. Paired with the burger served with house made pickles. The burger was great! The beer... Not so much.

S: Alcoholic raisins, a touch of smoke, lightly tart. Its not typical to the style, but not bad either. 3/5

T: More of the sweet prunes that the appearance promised, black tea, and tart cherry juice fermented in oak. Its not as complex as I like, and perhaps a little boring. 2/5

M: Lowly carbonated, moderate body, dry on the tongue but a little sticky on the soft palate. 3/5

D: The drinkability is highly enhanced by boring nature of this beer. The lack of complexities makes this easy to drink without thinking about it. That and the 9.1% ABV never really shows up in all its glory. Since the alcohol is well hidden, I'm going to call this "slightly above average". 3.5/5

Not sure of the batch on this bottle, though this bottle has been hanging around in my "cellar" for a while. At this point, the brett is really taking ahold of this beer.

The aroma is full of over ripe dark fruit, wine barrel, and funk. Impression is semi-sour

As for taste...the core of this beer is semi sweet, dark cherry, wine barrel, and oak. All of this is turned funky due to a musty brett presence. Its tough to find any malt base fitting to an "old ale" in this bottle. Really, this beer almost seems thrown together randomly, but in the end I think it works.

Mouthfeel is fine for what it is. Thinner side of medium, high amount of carbonation.

Overall, a good beer that doesn't fit its own description.

From notes. Enjoyed a while back at a tasting hosted by Doodler (whom probably supplied this as well). Cheers, amigo!

S: Smells of dark cherry, tannins, slight funk, and touch of leather. Very interesting. Can’t decide if the nose is enjoyable or the opposite, but that’s how it goes with experiments like this.

T: Nearly prune juice-esque with mix of mashed dark cherry and currants. Oak. Nice tart funkiness here with a touch of sweet brown sugar the fades to the finish. Dies quickly and leaves a weird after taste as well. This beer changed quite a bit as it warmed. ABV is well hidden though.

O: An interesting beer to say the least. I enjoyed the slight funk, but I think the fruits could stand to be a bit more balanced. Maybe it’ll get more rounded (and better) with age, but I’m not sure that we’ll cross paths again. Either way, fun to try.

Pours near black with deep red hues and a frothy tan head.

The aroma is quite complex. It starts with a cherry and vinous tartness, followed by some caramel and molasses sweetness. Slight leathery notes.

Again, more vinous and lightly earthy, Bretty tartness, followed by dark fruits, a light leathery character. Notes of oak come through as well in the transition from tart and Brett to dark fruit.

A very unique and enjoyable beer. A seasonal I will definitely look forward to each year now.