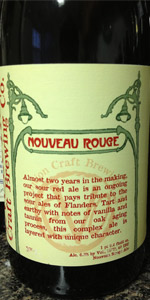 Notes: Nouveau Rouge is an aging project 10 years in the making, paying tribute to the sour ales of Flanders. This method of blending and aging creates a complex, tart and earthy ale with notes of vanilla and tannin imparted from the oak barreling process. With each year the solera evolves building upon it's award winning character.
View: More Beers | Place Reviews
Recent ratings and reviews. | Log in to view more ratings + sorting options.
Rated: 4.21 by Duncian from Pennsylvania

Pours a reddish brown with a little bit of pink foam.

Smell is tart with some sweetness and notes of cherry and vinegar.

Taste is sweet and sour with lots of cherries and cherry pits, along with some hints of vinegar and some funk.

Mouthfeel is medium with bright carbonation.

Overall,a very tasty and balanced sour, with just the right balance of sweetness.

Reviewed by Ri0 from Wisconsin

4.11/5  rDev +1.5%
look: 4 | smell: 4.25 | taste: 4 | feel: 4 | overall: 4.25
750ml bottle poured into a tulip. It is a very dark amber color with a fizzy dirty white head. Tart cherries, sour apple, vanilla, malt and oak. Starts off semi sweet then blasts with tart cherries and sour plums. I can taste the vanilla and oak within the malty liquid. Finishes with a lingering tart sourness. Not sour, but a nice sweet and very tart combination. A real treat to quaff. Carbonation gives the beer a fizzy, bubbly quality. Drinkable, and refreshing. Reminds me of New Glarus Enigma.
Aug 13, 2017
Rated: 4 by pda22 from California

Reviewed by AndrewMichael from Virginia

the color is a translucent shade of deep burgundy with small off white head with fine bead. The smell is fruity with subtle sour smell from the yeast. The texture is tart and funky with moderate carbonation with mild sweetness and alcohol with a semi-dry finish.

The taste is very good with a nice fruity almost tart berry-like flavor with subtle toast element in the malt with a funky earthy accent in the yeast with a nice dry yet sour finish. Overall I enjoyed this I would not hesitate to try it again

Reviewed by philbe311 from Pennsylvania

T - The notes alluded to on the palate take a slight back seat as the tannin like qualities rise to the forefront on the palate... Next comes the cherries and oak... The vinegar and tart sourness is somewhat limited...

D - Overall a very nice Flanders Red Ale... Not overly complex, but rather simple straight-forward and quite accessible... Overall it's a bit less than the sum of its parts, but it's still a nice job my Evolution...

The aroma is very sour and acidic with some oak, apples, berries, and red grapes. Smells like an apple cider getting it on with a sweet red wine.

It is super tart, mouth puckering sour up front. I feel like I got roundhoused by Chuck Norris wearing Jolly Rancher shoes that were used to smash grapes for wine. After I acclimated to it, the rest of the flavors are wonderful. A cranapple/cherry/raspberry fruit boquet along with a musty yeast, some oak, apple cider vinegar, and some subtle bitterness.

The body is a little thin and the carbonation seems a tad high, but I do like that the yeast strain does not seem to overpower it. Otherwise, it is a little astringent, but not from the alcohol.

I am still very new to the style, but this seems to be an excellent representation.

Appearance: Pours a murky cider brown with a head that fritters away like soda; some dots of lacing linger but this looks like a cider more than a beer

Smell: I am having a hard time getting the cider idea out of my mind as this smells like apple cider, with cherry tones (both sweet and sour) and vanilla

Taste: Acetic vinegar tones, at the outset with building sour cherry tones that add a lactic element; in the mid-palate, the sweeter side of the beer emerges, bringing a vanilla aspect, too; the finish adds the apple cider flavor, to some extent; acetic sourness wraps it all up

Mouthfeel: Medium to full bodied and quite flabby

Overall: Reading through the reviews, it is clear that this beer has had some carbonation issues, with many reports of poor carbonation levels, though some are having a different experience; clearly, there is some variability batch to batch but, having had more than a few Flanders Reds, I would put this among the weaker examples of the style I have tasted

Thanks, larryi86, for the opportunity

Murky brown, a little bit of snapping carbonation out of the bottle as well, but dissolving to nothing on top fairly quickly. Body color is quite cloudy, with a little bit of red hue, and just a tinge of noticeable linear streams of carbonation. Kind of a dirty swampy look on top as well. Not horrible but not a great looking brew.

Really nice nose and aroma. Oaky thickness and a good amount of tart acid. Hints of cherry fruit, a bit of lemon sourness, and even some vanilla slightly. Very strong acidic component tends to dominate. Some really nice wooden tones to this as well, almost like sweet cedar too. Very nice.

Palate manages a bit of unfortunate weak body, but flavors and quality still come out nicely controlled and pronounced. Tart middle notes of sour cherry and milk chocolate. Soft tannins and acid finish, with an excellent controlled sweetness of caramel and soft malt. Palate unfortunately just comes out a little flat, very low carbonation, but does not stop the flavors from reaching or getting to your tastebuds.

A pretty solid Flanders take, has a bit of missing body and a look that just doesn't quite get it into the upper tier, but definitely lots of good drink here.

4.5/5  rDev +11.1%
look: 4.5 | smell: 4.5 | taste: 4.5 | feel: 4.5 | overall: 4.5
Tan ring atop a reddish brown body. Wet oak, vanilla, lacto, and subtle earth in smell and taste play off the wonderful sour cherry that just sings on the palate. Add in accents of balsamic, red and black currant, and a touch of bright lemon juice. Vibrant and bright with the appropriate sourness and acidity, drinks very easy. Amazing new world approach that just comes across so pure and true
Sep 03, 2015
Rated: 4.07 by VeganUndead from Virginia

A: Pours reddish brown with one finger head that disappears almost immediately. No lacing.

M: Medium body with plenty of carbonation. Finish is tart and crisp.

O: Really nice sour. I have a love / hate relationship with the style, but this is a good one.

Rated by brpendergast85 from District of Columbia